Previously, on MinerBumping... Agents Alt 00 and Revis Owen worked tirelessly to give Maja Papaja fair treatment, but the dizzy Anti-Ganker seemed determined to forfeit her billion isk payment. However, Revis still felt there was a chance that Maja might buy a permit and spare herself some pain.

If there was any way that Maja could be convinced to buy a permit, she would first need to accept the reality of the Agents' fairness. Luckily, Alt 00 had a MinerBumping quote at the ready.

For the first time, Maja considered what might happen if she did buy a permit. It was a tremendous first step, even if the step had only been taken in her mind.

The mere contemplation of Code-compliance is often enough to help a miner begin his or her journey. 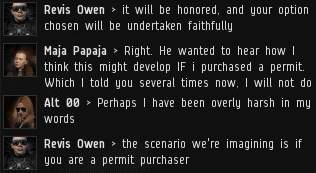 ...But Maja was particularly stubborn. She wanted to make it absolutely clear that her permit ownership was purely hypothetical. 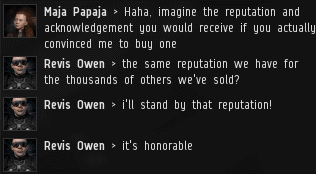 For some unknown reason, Maja thought it would be a particularly big deal if she bought a permit. Agent Revis quickly took her down a peg.

Alt 00 presented Maja with another way to end her story. Hers need not be a story of humiliation; it could be one of redemption.

Next, our Agent sought to establish some common ground.

Maja was willing to buy a permit, but only if she first got her billion back. However, our Agents quickly deduced that this might be a ploy: Maja could simply take the money and run. Besides, wanting to get her billion isk returned first wasn't exactly an expression of faith.

On the other hand, if Maja paid 10 million isk for a permit first, then she could instantly get her money back. It was a win-win. A no-brainer!

Would Maja Papaja--at long last--do the smart thing and buy a mining permit?