Previously, on MinerBumping... Maja Papaja's fate in the balance! Agents Alt 00 and Revis Owen threw all of their strength into a last-ditch effort to rescue Maja from her own foolishness and convince her to buy a mining permit. Just when all hope seemed lost, Maja showed signs of caving.

At this critical moment, Agent Revis had to go do something cool in another venue. Would this unexpected development blow up the deal? 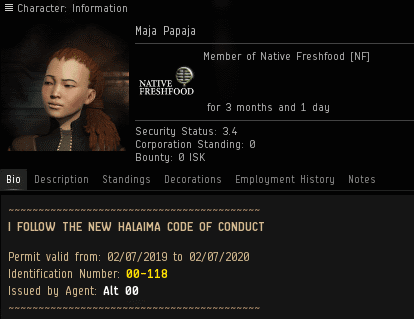 No. The CODE always wins. Always! 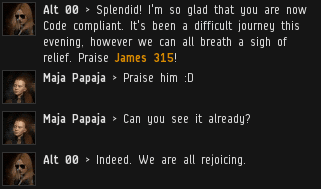 Maja finally saw the light. She put aside her childish ways and handed 10 million isk to our Agent. 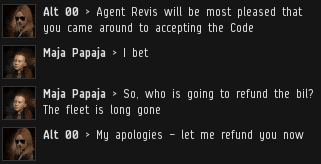 Alt 00 had been hired to launch a strike against a fleet of Maja's enemies. The delays caused by Maja's stubborn refusal to buy a permit had enabled the targets to get away. As a permit-holder, Maja wanted to have her billion isk merc fee refunded. Would our Agent keep her word and return the isk? 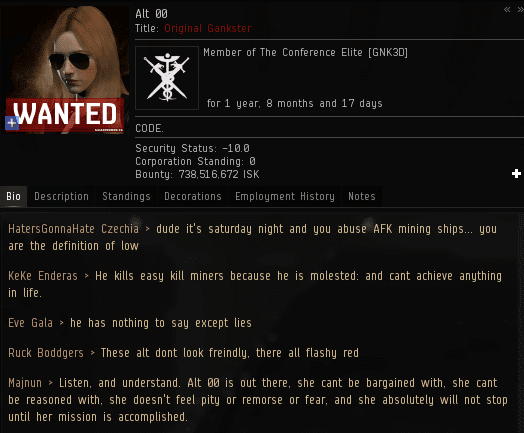 The rebels and skeptics no doubt assumed, in reading this report, that Alt 00 would simply keep the isk. "The New Order is full of scammers," they would say. But they obviously don't know Alt 00 very well; she always keeps her promises. With a graceful swoop of her mouse, she navigated the EVE UI and prepared to transfer the isk. 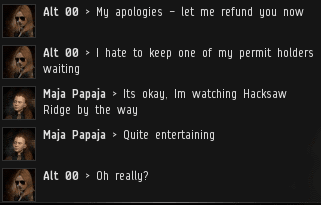 The light of the Code can't help but reveal the truth in all things. 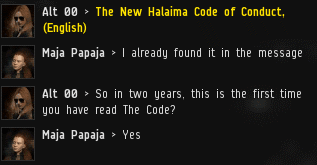 ...And her first promise is to the Code. 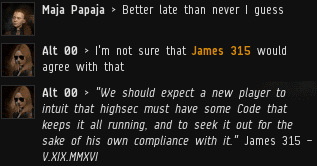 At the last possible moment, Maja had ruined everything for herself. Or had she? 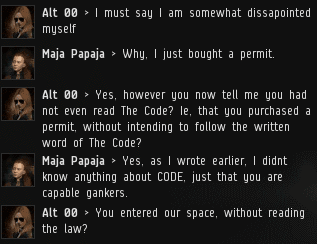 The entire experience had been a roller coaster for all parties involved. A thrill ride, if you will. But what happened to Maja next would be something that no one--not even Alt 00 herself--could have anticipated.