Previously, on MinerBumping... Unflinching Savior and The Ore Hunter were repeatedly undone by Cynthia Rotsuda, whose mere presence seemed capable of dumpstering the miners' billions of isk worth of "work" mining ice in Halaima. When the miners lost two additional Orcas thanks to Cynthia's kill rights, Agent Aiko Danuja leapt into action.

An appeal directly to the Saviour of Highsec himself seemed like the obvious solution. But weeks had passed since Unflinching/Ore Hunter had last attempted to send the Saviour an EVEmail. There had been no answer.

Agent Aiko had been part of the fleet that killed Ore Hunter's Orcas. That small detail seemed unimportant now, though.

Aiko was mystified by the entire situation. How could a permit-owning miner find himself in such a spot?

The miner insisted that he only wanted to do everything right and obey the Code. 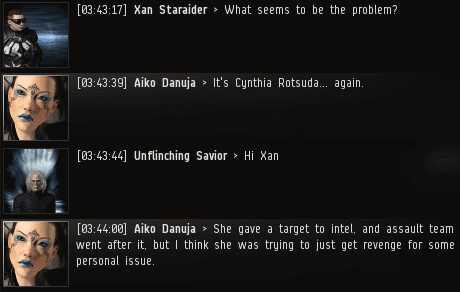 More Agents got involved. Would this mean more help for the miner--or just more layers of bureaucracy?

The miner wondered if he'd ever get his hands on the billions of reimbursement isk he felt he was owed. 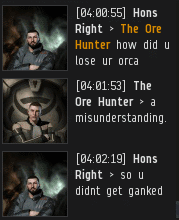 News of the latest Orca deaths spread through Halaima; other miners feared that they might be next. As for Unflinching/Ore Hunter, he had a new assignment: Writing another lengthy report to support his reimbursement request.


I am providing a follow up to our discussion on Tuesday, 3/26 EST (3/27 UTC) regarding events that initially occurred between Cynthia Rotsuda and I on 3/13 up to the recent events that occurred on 3/26 while I ice mined in the Halaima system. You asked me to be truthful which I am happy to do, so please excuse the lengthiness of this mail. The details and facts are important to include.

The miner insisted that he would be both thorough and completely transparent. No bias, no spin, no lies.


As you can see from the recorded local chat below, Cynthia Rotsuda arrived on scene and announced permits were required as per James 315.

Considering I already had both permits for CODE and MiniLuv, purchased from Eugenie Brazier, I felt comfortable. Seconds later, Cynthia Rotsuda approached me at a high rate of speed and bumped my Skiff. Cynthia made no attempts to communicate with me and my review of this player's profile revealed no association with CODE. At that moment, I felt this was a setup and that a gank was imminent. Therefore I ordered my drones to attack Cynthia's ship.

Once again, the miner told his story. According to him, he was absolutely innocent. And there was no question that he owned permits. So how in the world did all of these things happen?

All things are revealed under the blissful, relentless glare of the Code's light. Slowly but surely, the pieces come together--falling perfectly into place. 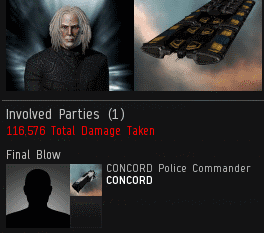 The lack of understanding of basic highsec game mechanics when the miner got himself CONCORDed... 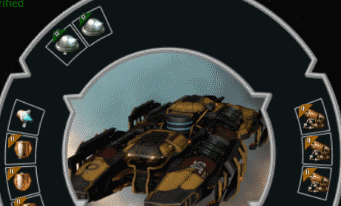 The disrespect and disregard for both Agent and Code, carefully omitted from the miner's account of the conversation... 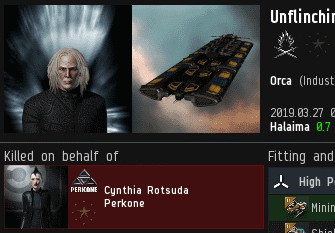 The foolishness of mining in Orcas while under a kill right...

...And the logs. Cynthia's combat logs show, unmistakably, that the miner attempted to attack her at 23:19, one minute before she ever opened her mouth in local. 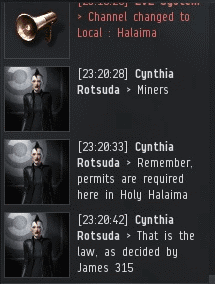 Contrary to what the miner had said all along, he CONCORDed himself at the mere sight of Cynthia's frigate. Cynthia had merely to think the name of James 315, and the miner destroyed his own blingy, Code-violating Skiff and Orca. And as the fires of CONCORD began to rain down, Cynthia spoke the truth in local.

The name of the Saviour of Highsec is indeed a powerful litmus test, even when it is only held in the mind of the Agent who wields it. It causes the bot-aspirant to reveal and destroy himself, no matter how well-hidden he may be behind his lies, his protestations of innocence, and, yes, his mining permits.

Reimbursement is denied, but the Code never is.
Posted by MinerBumping at 18:03