The Invasion of Uedama, Part 2

Previously, on MinerBumping... CCP unleashed the "Triglavian Invasion" in highsec, which led to even more non-compliant carebears dying in the Uedama system. Agent Alt 00 aided the PvE-seeking bot-aspirants by reminding them of their obligations under the Code.

Not every carebear appreciates the Code. Vantaanya was triggered when he witnessed our Agent speaking about mining permits. Out of nowhere, he accused the mighty CODE. alliance of destroying EVE.

It was safe to say that Vantaanya was not of the "CODE. has no impact on the game" school. But where had he gotten his heretical notions about gankers killing EVE?

The carebear's anger loosened his lips. He shared a stunning secret: Pearl Abyss had plans to attack CODE.!

According to Vantaanya, Pearl Abyss intended to remove suicide ganking from the game. Nothing of the kind has been announced in public, so the carebear must have been in private talks with the Korean gaming company.

Our Agents grew concerned for the miner; even sharing his revenge fantasies about Pearl Abyss had not calmed him down. Vantaanya had a vendetta. Had he been ganked by CODE., perhaps on an alt? 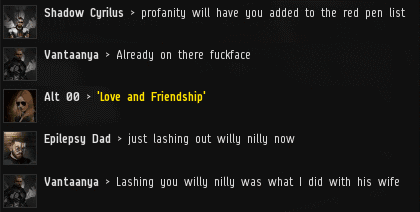 Surely Vantaanya wasn't still upset about losing a cheap pod to one of our members back in 2015. Then again, when it comes to highsec carebears, anything is possible.

It appeared as though no one had ever told Vantaanya that ganking improves player retention. If only he knew that the New Order was the only organization committed to saving CCP from bankruptcy.

Another bombshell: Vantaanya accused our Agents of widespread botting. 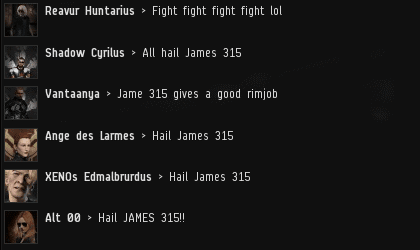 Someone had done a thorough job of brainwashing this miner. In protest, our Agents raised a chorus of James 315. Would it be enough to bring Vantaanya to his senses? 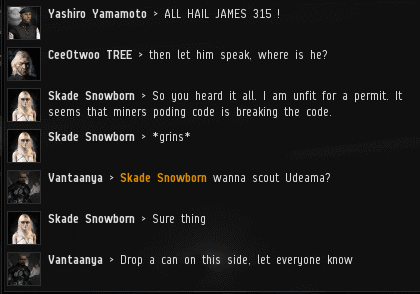 Instead, the troubled miner attempted to recruit a fellow carebear to help him protect Uedama against the gankers. Would Vantaanya's rebellion gain traction--and threaten the security of highsec?