Previously, on MinerBumping... Agent Alt 00 was contacted by the mysterious Maja Papaja, who wanted to hire her to gank an unidentified enemy. Intense negotiations ensued.

Aside from the billion isk upfront fee, Maja was getting skittish about the gank itself. Our Agent assured her that the mighty CODE. alliance knows how to kill stuff in highsec. 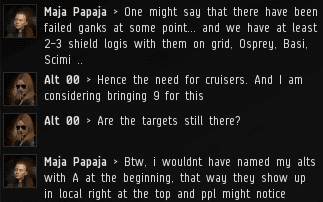 Now that she was seriously contemplating paying Alt 00 a billion isk, Maja couldn't help but feel anxiety about the whole thing. She drew strength from Agent Alt 00's invincible confidence. 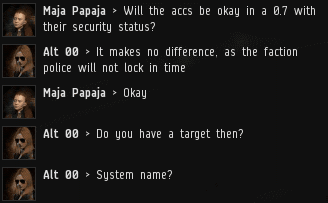 'Twas time to move things along. Alt 00 was eager to get paid. 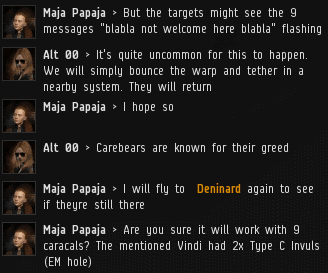 Maja fretted about the details; our Agent indulged her. 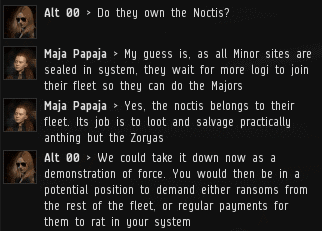 The plan began to take shape. But Alt 00 never forgot her primary mission: to see justice done in highsec. Subtly, she tested Maja to learn more about her true intentions.

Finally, Maja revealed the name of her main target. It was a familiar one.

...For Alt 00 had dealt with the individual in question. 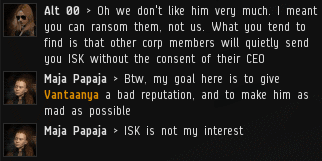 Vantaanya's conduct ensured that not only had he failed to organize a successful anti-Code resistance during the Triglavian Invasion--he made active enemies of his would-be supporters!

It's safe to say that Vantaanya's reputation couldn't get much worse. But Maja was the one ordering the hit.

When Alt 00 learned the location of the intended target, she decided to organize the gank fleet in Aufay instead of Nakugard.

Maja was summoned to Aufay so that she could see the fleet was real. 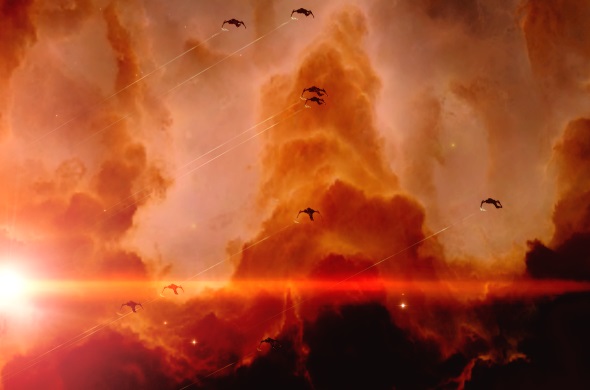 And it was a glorious sight to behold.