Previously, on MinerBumping... Maja Papaja made Agent Alt 00 an indecent proposal: Maja would pay her a billion isk to wipe out a target of Maja's choice. Everything was going according to Maja's plan--until a snag was hit.

Maja paid the billion isk fee, and Agent Alt stood poised to deliver a death blow upon Maja's enemy. And just as soon as one more task was completed, the deed would be done.

Alt 00 was getting ready to strike when Maja made a strange comment about maybe not owning a New Order mining permit. 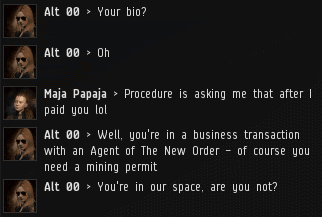 Our Agent was puzzled. Why would a Code violator attempt to do business with a Code enforcer? That would be like going to a police station to make a sales call when there's a warrant out for your arrest.

Thanks to Maja's curious remarks, the conversation became strained and awkward. Alt 00 sent her Caracal gank fleet back to port so that she could give Maja her full attention. 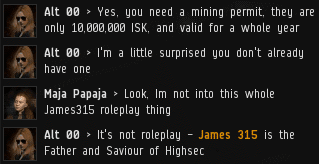 Alt 00 offered the unlicensed carebear a mining permit for the low, low price of 10 million isk. Yet it seemed that the whole "Code" thing was not to Maja's taste. Alt tested Maja further by linking the name of the Saviour of Highsec.

Maja responded to the Saviour's name like a vampire to garlic. In case you were curious, this is the portrait that Alt 00 linked. I recommend clicking the link to view the full-size version, as there are many exquisite details. 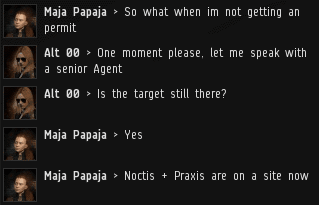 Maja balked at paying our Agent 10 million isk, even though she had just transferred one hundred times that amount only a few moments earlier. 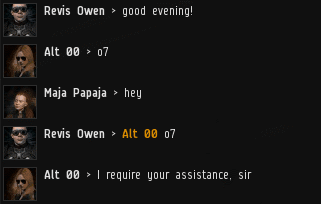 Agent Revis Owen dropped in, and not a moment too soon: Maja's targets were still hanging around the area, but who knew for how long? 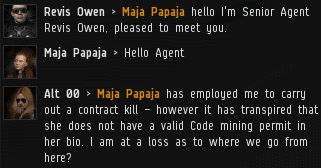 There was little doubt that Maja was in violation of the Code, but Alt 00 was very mindful of the fact that she had a billion isk of Maja's money sitting in her wallet. Perhaps Agent Revis could find a way to ensure that all parties would be satisfied. 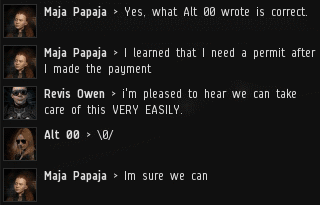 Luckily for Maja, our Agents are EVE's greatest problem solvers.