Can you believe it? Two hundred editions of the Highsec Miner Grab Bag. How does a tradition--an institution--like this keep going, even after all these years?

In short, greedy carebears like kiralex gnahc are the reason that we have hundreds of Grab Bags. And you know what? We're only getting warmed up.

kiralex lost a Venture, in case you were curious. 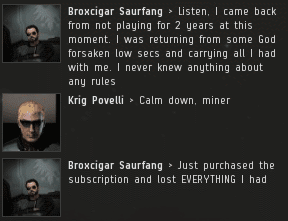 Broxcigar Saurfang threatened to re-quit EVE because he was ganked. I wonder what sort of player we'd lose, if Broxcigar indeed carried out his threat to leave the game. 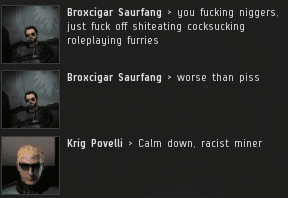 Frankly, I think EVE will be okay without him.

"Don't talk about the Code," says the Anti-Ganker. "Don't give them the attention they crave, or else they'll keep ganking." And so the carebears don't warn each other. Poor miners like Zion Rothschild are left in ignorance, and they're surprised when they get ganked.

If only Zion had been warned.

Then again, maybe he would've reacted badly to the warning. 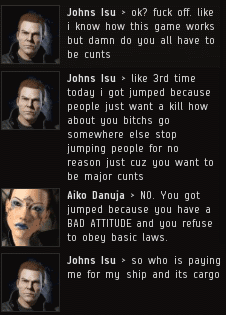 I wonder how surprised this guy was not to be reimbursed?

Protip: If you want reimbursement, you're gonna have to do a lot better than "neutral".

It's no surprise to anyone with an understanding of the EVE community that the most productive, well-adjusted citizens are to be found among the New Order. I'd be wary of anyone who hangs out in the Mining channel, though.

Speaking of which, let's pay the Mining channel a visit:

We've seen time and time again that the miners are very quick to blame their own Code violations on their young children.

A five year-old child is probably more trustworthy and reliable than your average highsec miner. 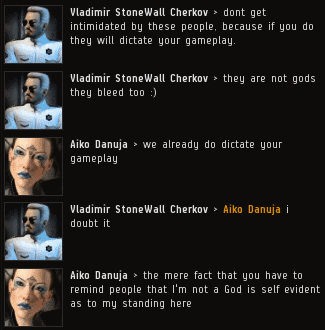 Those who enforce the Code are full of power and might. And highsec is fortunate to be ruled by them.
Posted by MinerBumping at 18:03