Previously, on MinerBumping... Agent Ebb Eto was just doing his job when he ganked unlicensed Venture pilot HoodHe. But that didn't stop the miner from placing a curse on Ebb and his entire family--wishing a painful death upon them all.

Because HoodHe had blocked Agent Ebb, the only way they could communicate was through Archie Audene, an impartial mediator. "Communicate" might be overstating it, though.

The possibility of reimbursement isk floated in the ether. Unfortunately, HoodHe was too angry at Ebb to unblock him and discuss terms. But then, the next day, there was a breakthrough: 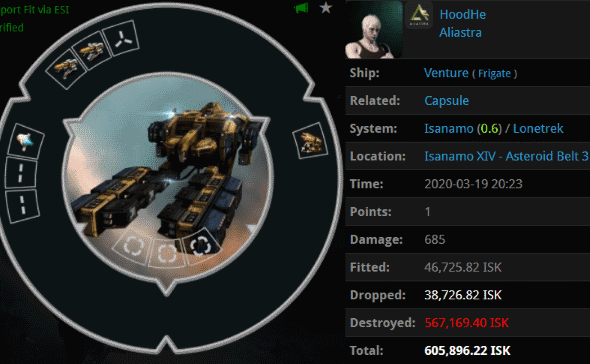 Said breakthrough came in the form of another gank. Our Agent caught HoodHe mining in the very same asteroid belt as before.

When HoodHe returned to his keyboard and discovered that he had lost another Venture, he finally realized that his problem with Ebb wasn't going away. So the miner unblocked Ebb and resumed talks.

Still unwilling to purchase a mining permit, HoodHe chose instead to threaten Ebb's family. Because Ebb had chosen to gank his Venture, Ebb's entire family was as good as dead.

It was a terrible price to pay for a 605,000 isk mining frigate. HoodHe didn't mess around. 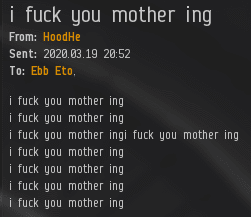 Over time, HoodHe grew more defiant. But, in fact, the miner's curses were no defense against the Code.

HoodHe made another terrible mistake: He revealed that he was back in the exact same asteroid belt. 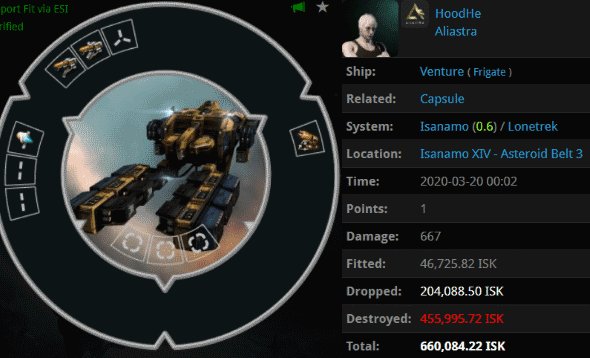 A few hours later, Agent Ebb's patrol circled back to the Isanamo system. Sure enough, HoodHe wound up losing yet another Venture in the same spot.

HoodHe was truly a creature of habit. This time, however, he was willing to do something he had never done before.

The miner chose to strike up a conversation with Ebb in local chat.