Highsec miners: "Ganking is too easy and there's no counter to it. Ganking needs to be nerfed (again)." 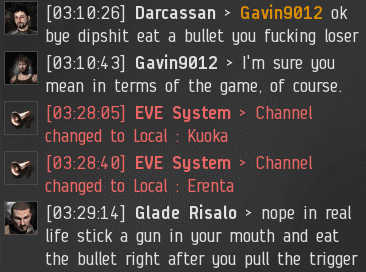 Previously, Agent Gavin9012 performed a righteous gank, arousing the ire of Darcassan, who tried and failed to retaliate with a failed gank.

As we've seen in the past, highsec miners do not appear to receive punishments from CCP when they make real-life threats. However, on the rare occasions that miners attempt to perform ganks, they are subject to the kill right mechanic. 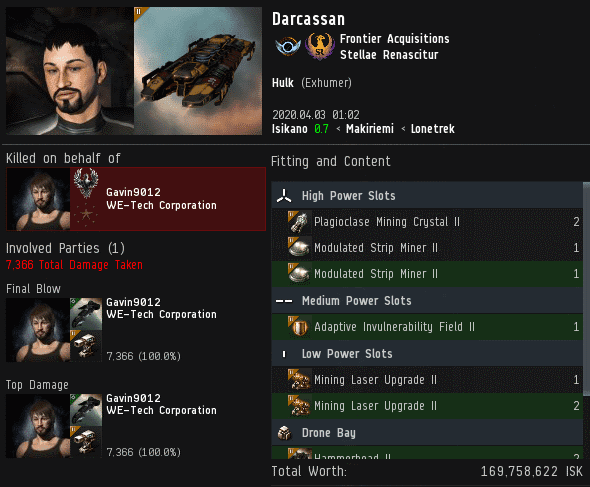 ...Which allows our Agents to deliver a punishment of their own. 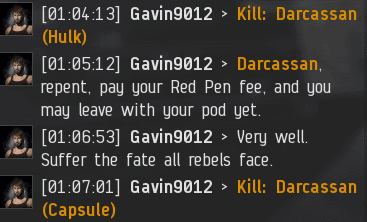 Agent Gavin9012 came across Darcassan and tried to reconnect with him. Alas, the miner spoiled their reunion by being AFK. After a few minutes of holding Darcassan's pod with a warp disruptor, Gavin9012 sighed and killed him.

While Darcassan enjoyed his trip on the Pod Express, one of the miner's alts, drzaus, registered a complaint in local. drzaus linked the wrong name in local, but Gavin9012 got the message.

The miner had not matured since his original gank--he was still in the "eat a bullet" phase. 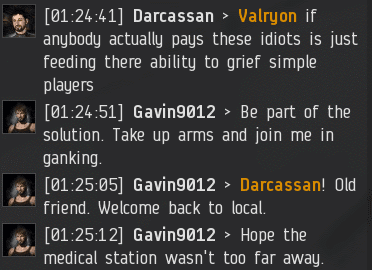 Eventually, Darcassan made his way back into the system. Now the Agent and the miner could have a proper chat.

Instead of excluding EVE's lesser players like a bunch of elitists, our Agents graciously invite everyone to taste the sweet fruits of ganker life. 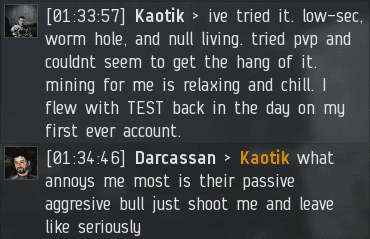 Incredibly, bot-aspirant miners prefer to get bored in highsec and go AFK, rather than experience excitement, joy, and victory. 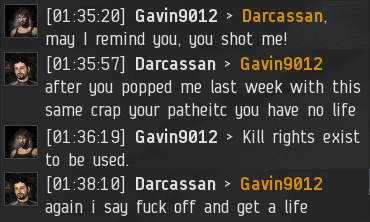 Darcassan made a brief attempt to defend his actions. After failing, he defaulted to factory settings and retreated to the center square of Miner Bingo. 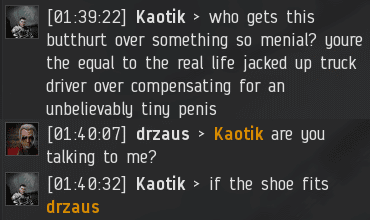 In time, of course, the miners began to squabble amongst themselves.

Miners hate gankers and blame them for everything, but the truth is that the carebears are perfectly capable of making each other miserable all by themselves. What they need, obviously, is the Code. It's amazing they can't see that.
Posted by MinerBumping at 18:02