What would you do to safeguard 1.7 billion isk in this game? 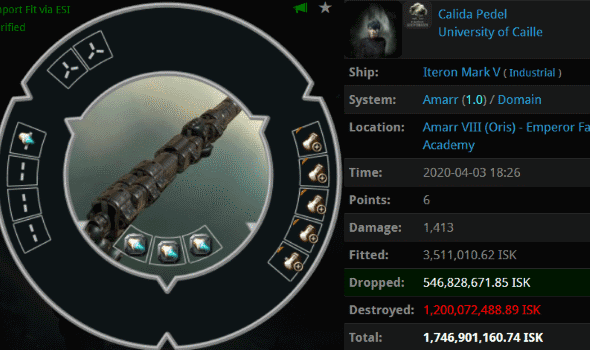 If your answer is "reduce my ship's hitpoints", then you might be a Goofus.

Highsec Goofus Calida Pedel was invited to join a friendly conversation with Agent Blake McAllister. But from the outset, Calida misread the room.

Calida directed all of her anger at Blake. Apparently she wasn't interested in having a mentor.

War was in the air. Calida advised Blake to self-quarantine for the next four weeks. But our Agent provides highsec with an essential service.

Calida felt she had leverage over Blake: The threat of retaliation from her main character's corporation. Both Calida's main character and the corp were unidentified.

In addition to the military might of Calida's unnamed corporation, there were important moral issues at play. Blake had a bounty on his head. That made him the bad guy. He needed to change his ways.

Although Calida considered Blake to be a criminal, a liar, and a "fucking worthless scammer", she was confident that he would have a change of heart and give her a billion isk.

Suddenly, the tables were turned: Calida had a bounty! Now she was a bad guy, too.

The outcome of Calida's anonymous TeamSpeak conference increased the likelihood of a violent conflict. Neither side was willing to budge. Calida and Blake were about to drag their alliances into war!

A last-minute appeal to nationalism backfired when Calida discovered--to her horror and disbelief--that Blake was also German. Though they came from the same country, the two couldn't have been more different. Agent Blake represented the very best of Germany, while Calida was too ashamed to speak the name of her own corporation--if it even existed. In the great war to come, my money's on the Agent and his Code.
Posted by MinerBumping at 18:03