Previously, on MinerBumping... Agent Ebb Eto ganked some of HoodHe's favorite Ventures. The miner threatened to retaliate by killing Ebb's entire family. Ebb would need to find a way to establish a good working relationship with the murderous miner if there was any hope of selling him a permit.

HoodHe placed himself at the scene of the original COVID-19 outbreak in Wuhan.

Despite HoodHe's earlier death threats against Ebb's family, perhaps there was a way for the two to connect on a human level. 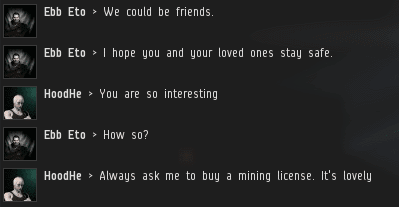 After opening up about his own family, HoodHe seemed less interested in murdering Ebb's. But he was still reluctant to purchase a permit. 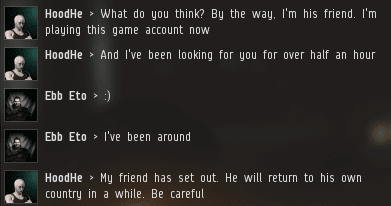 Out of nowhere, the miner claimed to be HoodHe's friend, disavowing the threatening EVEmails that had been sent from his account.

Our Agents have learned to be suspicious of such claims. Anyway, the HoodHe character would need to get a permit--regardless of who was in control of the account.

HoodHe and/or his friend was willing to devote at least a few months to hunting down Ebb and taking revenge. Agent Ebb didn't mind; HoodHe couldn't engage in illegal mining if he was busy hunting gankers.

Of course, Ebb doubted the miner's resolve. Before long, he would get bored and resume AFK mining.

As expected, HoodHe grew weary after a few minutes passed. 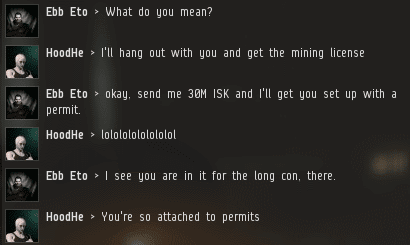 Next, HoodHe's attempt to infiltrate the New Order ended in failure. Less than a minute of espionage was enough to exhaust the miner's patience. 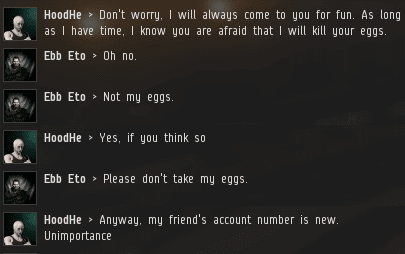 As usual, the miner's revenge was postponed indefinitely. 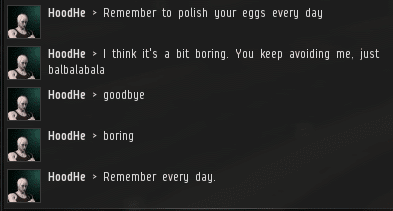 HoodHe prepared to leave the system. Yet something was holding him back. Was he having second thoughts about the Code?

Although HoodHe claimed that his "friend" had made the real-life death threats against Ebb's family, he shared his friend's desire to obtain personal information.

Once HoodHe was released from Wuhan, there would be hell to pay.

The scope of the blood feud grew: HoodHe was confident that he could recruit his brother into the scheme.

For now, HoodHe remained on lockdown. Ebb could sense that he was a troubled miner; no wonder he was unwilling to buy a permit. But there is one known treatment--a cure--for bot-aspirancy: the Code!
Posted by MinerBumping at 18:02