Previously, on MinerBumping... Celebrated isk doubler Erotica 1 invited me to act as an escrow agent to help her 100th client win big in a special Bonus game. The client, Hydra Fire, was told to systematically contract me all of his assets, which he did. 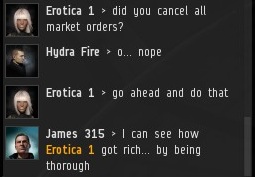 Erotica was well-versed with every possible way in which an EVE player could have assets stored up. 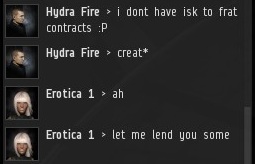 After Hydra took down his market orders, he had a few more assets to transfer to me. But since he had already given away all of his liquid isk, he couldn't pay the contract creation fee. Erotica stepped in and gave him some money to cover it. 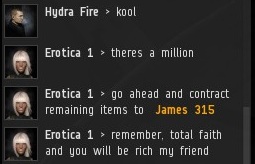 Everything was going extremely well for everyone involved. Both Erotica and Hydra were acting with the utmost decorum, proving the cynics wrong about EVE. Maybe all of those stories I had heard about slick con artists in Jita were a bunch of hooey. 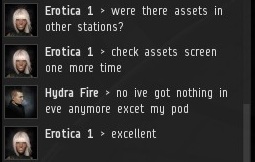 Hydra's task, to put total faith in Erotica and relinquish all in-game assets, was reaching its conclusion. 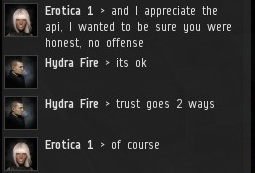 To confirm that Hydra was not attempting to scam Erotica, he had previously supplied a full API for his character. I cross-referenced the contracts he had assigned to me with the API-supplied asset list. The tension was building in the Bonus Room; everyone held their breath as I prepared to make my recommendation as to whether the jackpot should be paid out. 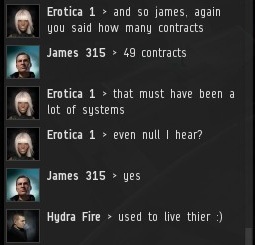 Everything was accounted for. Satisfied that everything was in order, I gave Erotica the green light. The big payday was imminent.

From the beginning, Erotica had Hydra in a TeamSpeak channel. Though Erotica was not able to speak, she could listen. Hydra had done some of his communication regarding the contract transfers via TeamSpeak. Once he started assigning the contracts to me, he relied more on the in-game chat, and was silent in TeamSpeak. As Erotica prepared to pay Hydra the jackpot, she asked him to speak. This is her custom; she loves getting the live reaction of the big winners when the jackpot is paid out. 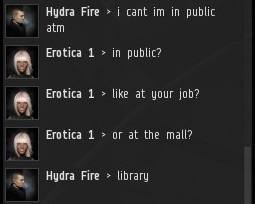 Unfortunately, Hydra didn't feel comfortable speaking aloud, since he was in a public library. 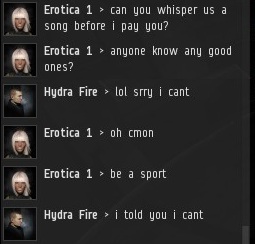 Erotica urged him to at least quietly whisper a song to her. Hydra was reluctant. 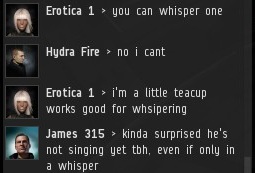 Erotica recommended the song "I'm A Little Teapot". I didn't see any harm in someone whispering a song in a library, especially under these circumstances. 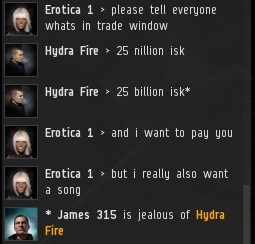 As this was going on, Erotica was prepping the big jackpot payout. True to her word, she opened up a trade window with Hydra and put the grand prize of 25 billion isk into it. All she had to do was press the "accept" button. The payday was now just a click away. Inspired, Hydra agreed to whisper a song. 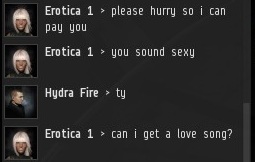 Hydra ran through "I'm A Little Teapot" in hushed tones. Erotica requested an encore, and asked the participants in the Bonus Room to suggest a love song for Hydra to sing. Afterward, Hydra would receive the full 25 billion. 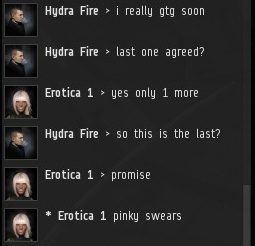 Joe Endicott made a love song request, and Hydra looked up the lyrics online. He was now just moments away from winning a quarter of a tenth of a trillion isk.

A SoundCloud recording of Hydra Fire's time on TeamSpeak has been uploaded for your listening pleasure. Though the event covered a couple hours, the silent portions have been edited out, and the recording parsed down to just three and a half minutes. The singing begins at the 1 minute 49 seconds mark. Here's the link:

Just as Hydra was wrapping up the love song, something extraordinary was heard.

It was the unmistakable, bloodcurdling ring of a telephone. Everyone in the channel froze up like a deer in the headlights. And that is when we began to discover that nothing was as it seemed.

To be continued...
Posted by MinerBumping at 20:19