In August, back when nobody had ever heard of the Elonaya system or Heavy Met4l Queen's rebellion, Kino was the heart of all turmoil in highsec. 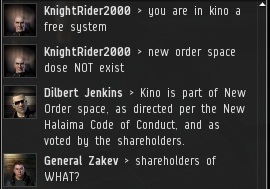 The Kino rebels were the first to try organizing a resistance movement.

"Free Kino" became "Free Lonetrek", and they created a channel dedicated to fighting back against those whom they perceived as their tormentors. 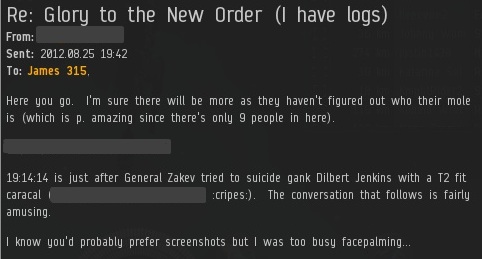 It wasn't long before an Agent of the New Order penetrated their security and began feeding me intel intercepted straight from the source. Now, for the first time, this story can be told.


Kyraiela > Welcome Knightrider, and thanks for speaking out for our cause
KnightRider2000 > oh this is an ongoing thing between me and this little band
Kyraiela > and we appriciate it
Kyraiela > How much would you lose to shoot that little shit out of the sky?

The ringleader, Kyraiela, got right down to business. The first order of the day: Destroying the bumpers.


Kyraiela > I am willing to fund podkilling idiots like him, within reason of course.
General Zakev > i've had some fellow alliance members try killing him but concord mechanics are a bit buggy atm

You have to love highsec miners complaining about overpowered Concord. I'm pretty sure it was their failgank setups that were "buggy", however.

Of course, Sara Economics, at the scene of every fire. Throughout the period this channel was active, Kyraiela repeatedly changed the MOTD, the message that automatically appears when the channel is opened:


EVE System > Channel MOTD changed to: "The idiot list so far:adam nobody, anagantonios raholan, bulangica SQL, Camilla Camaro, Captain jes, Catalytic morphisis, Elyse Sidewinder, Gisem, Kain Nobody, mallak Azaria, MhG29L, Oxygen Achasse, Supich, Tappad, Will Villante, Johnny wombat, dilbert jenkinsPut these people on Terrible standing (red), they are known gankers and bumpers.Report gankers not on the list, they will be added and blocked from this channel so we can talk freely.Against being bumped, orbit your ship at 500m around your roid and report the bumper to CCP to get his ass banned. We did it before, CCP will act upon it." by Kyraiela.

Conspicuously absent from the "idiot list" was James 315 himself, the Saviour of Highsec. Weeks after I made the blog post debunking it, many in Kino still believed the false rumor that I had been permabanned by CCP in response to petitions about my bumping. They thought some of the new bumpers were my alts, and that I was using the alts to evade the ban. So the "free miners of Kino" were encouraging each other to petition all of the new bumpers to get them banned, too. I don't envy the GMs who had to sort out this mess.


Kyraiela > Someone please check that list and tell me the names of the shareholders so I can block them from here
furcillin > if you visit their propaganda site, it has a farily complete list

I was always curious what the rebels thought about our shareholders...

Those were the top contributors listed in the sidebar back in August. We were approaching near 100 total shareholders at the time.

A couple bumpers were active in Kino at the time this conversation took place. General Zakev couldn't take it anymore. He was determined to act.


General Zakev > Im sick of this guy, im going to get a cruiser to fuck him up
Kyraiela > insure your cruiser, I will pay 10 mil for his corpse
General Zakev > ill let yoknow how it goes

Any proper ganker would have known that insurance payouts were removed for suicide gankers several months ago--at the request of people just like this!

General Zakev was referring to the Concord squad already in the ice field. Apparently he didn't know Concord jammers are governed by the following formula: C = 100%, where "C" is the chance of being jammed.

General Zakev linked his caracal fitting, of which our spy did take a screenshot: 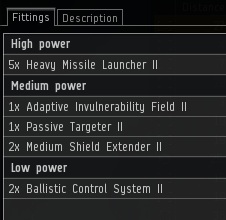 But will he succeed, or will the New Order score another victory? And how will the resistance react to the outcome? To be continued...
Posted by MinerBumping at 01:23