The last several weeks have seen a proliferation in Agents of the New Order. What happens when a Code-compliant miner pays an Agent, and then gets bumped when another Agent happens along? One possible solution that gets bandied about a lot is a public Blue Pen list of all the miners who have paid any Agent. There are problems with the idea, though: The miners on the list may face retaliation from our enemies, and it would be possible for a false "Agent" to report his friends when they haven't really paid. 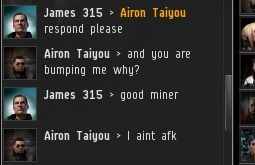 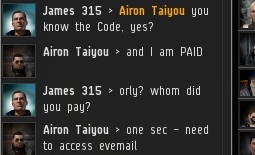 This issue came up the other day when I was bumping and talking to Airon Taiyou, who claimed to have already paid another Agent.

After a suspiciously long time, Airon EVEmailed me the name Rayna Teslaria.

It's possible Rayna is an Agent. Many--perhaps most--Agents operate so independent of me that I don't even know their names. Anyone in highsec can bump someone in the name of the New Order, and they're considered an Agent whether I know about them or not. But what if a miner had one of his own alts claim to be an Agent, and he falsely reported his own payment? It was time for some of that Solomonic wisdom for which I am so well known. 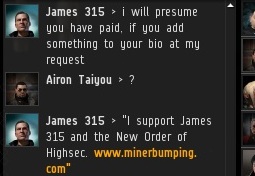 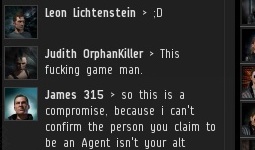 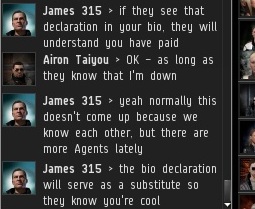 There's one minor flaw in the in-game bios: They don't update very quickly. However, it seems you can get an up-to-date bio by looking it up through EVE Gate. As an example, you can see my profile on EVE Gate and simply replace the "James 315" part of the URL with the name of any character you want to check. 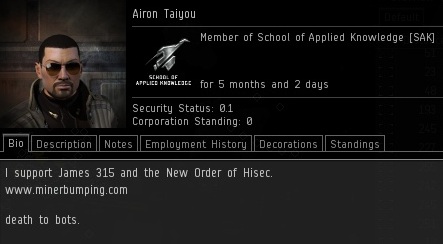 After Airon claimed to add the message to his bio, I went on EVE Gate and punched in his name. Sure enough, he had. An hour or so afterward, his in-game bio was updated, and I took a screenshot.

I haven't made it a standard procedure to ask miners to put loyalty declarations in their bios. But I think there's something to this. The next time you're bumping someone who claims to have already paid, you might want to test this out. A Code-compliant miner should have no problem with it, while a treacherous miner will always refuse. Once they claim to have changed their bio, you can verify it through EVE Gate.

Can you imagine a highsec where every miner pledges loyalty to James 315 and the New Order, and links this website to further our recruitment and education efforts? I certainly can.
Posted by MinerBumping at 18:14