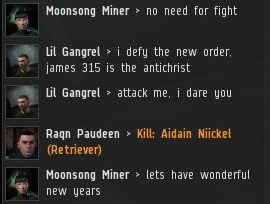 Moonsong Miner urges a temporary truce in celebration of the holiday, but her cries go unheeded. Brapelille is in the midst of a storm brought by the New Order. The winds of change are blowing.

Miners vow they will resist, but their will to fight crumbles. The miners flee to Chelien system, hoping they can find respite and undisturbed AFK mining. Among the refugees evacuating Brapelille is Moonsong Miner. 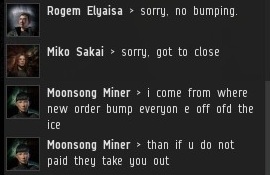 Chelien, too, is brought to heel by the New Order. Within days, the miners are on the run once again. They move north, to Deninard. 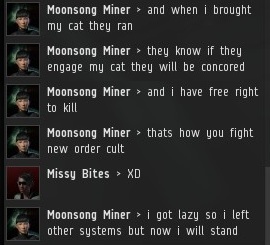 Moonsong is tired of running, and is determined to make her last stand in Deninard. For the first time, she fits a tank and begins to pay attention to the environment around her. 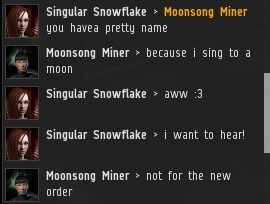 At times, she is willing to speak peaceably with the New Order. She occasionally offers a truce, but she's quick to change her mind. 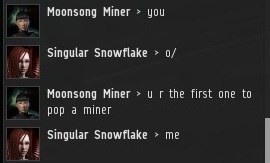 Moonsong experiences a rollercoaster of emotions. She is baffled by our Agents' ability to be polite and friendly in local, but at the same time to commit what she considers atrocities. 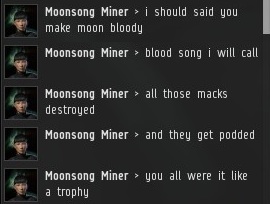 In Moonsong's eyes, the New Order are a terrifying vision, a savage warrior race that bathes in the blood of innocent miners. 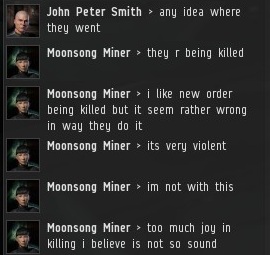 When the New Order's Agents leave the system to strike somewhere else, Moonsong assumes they have been killed by the rebels who promise to protect the system. But even then, Moonsong has mixed feelings. She doesn't want anyone to die in highsec. 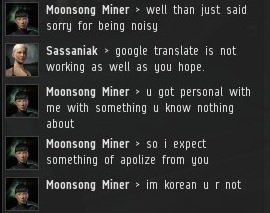 The miners gathered in Deninard have been traumatized by being forced from one place to the next. Deninard becomes a garrison system, its miners hopelessly paranoid. At the slightest provocation, they accuse each other of being Agents of the New Order. 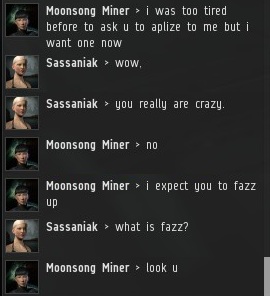 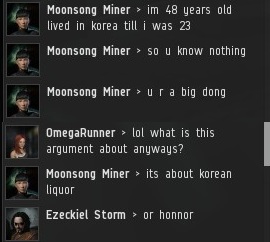 Anyone could be a spy for the New Order. For Moonsong, anyone who appears too friendly or too hostile is suspicious. 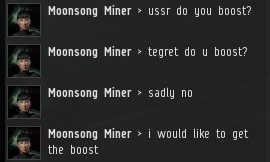 She doesn't own an Orca of her own, so she needs to ask around for bonuses. But when no one will respond to her, she gets an inkling of the true nature of the carebears who surround her.