The Dimmest Stars in the Galaxy, Part 1

People often ask me, "James 315, how do I know when it's time to change corporations?" Well, it's probably time to seek new employment when your corp description reads like this: 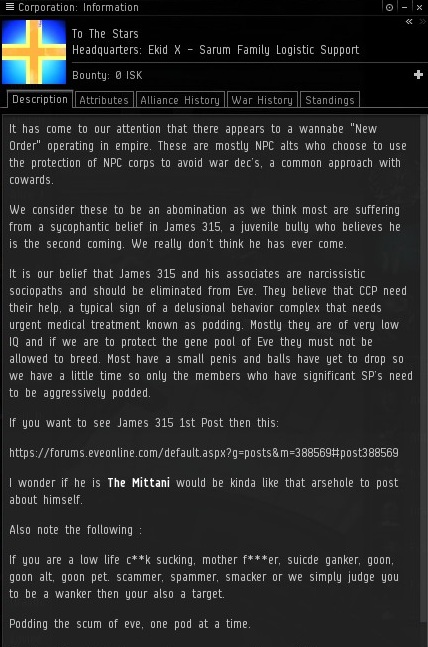 No, that's not a joke. It's the actual corp description of To The Stars. As a general rule, when your corp's identity is defined by a bucketload of tears about me (and my associates), the corp may be in trouble.

Before I had even encountered these individuals, they were already declaring war against me. In a few minutes, I won the war with my customary 31.25:1 kill to death ratio. Experimental Fun Times Corp has now inflicted a total of 350 million isk of damage against its enemies. Without breaking a sweat! 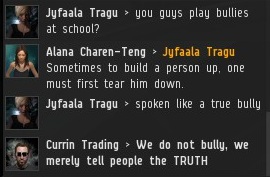 Jyfaala Tragu is To The Stars' CEO. She's still in the earlier stages of rebel evolution, so she speaks primarily in clichés.

It didn't take long for me to notice that Jyfaala thinks of everything in terms of school. I wonder what that means? 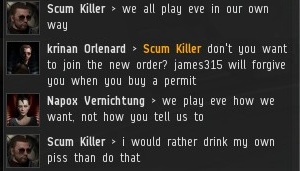 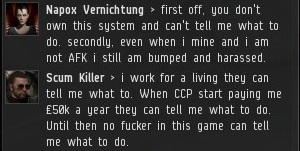 Scum Killer, another ace pilot in the corp, is also struggling to get past the cliché phase. 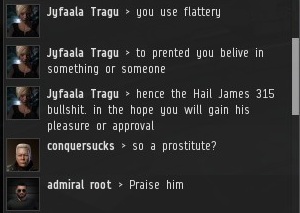 Jyfaala is extremely angry about something, but I'm not sure what. I don't think I've heard anything positive from her yet.

Another sign of To The Stars' rookie status: The belief that everyone is my alt. 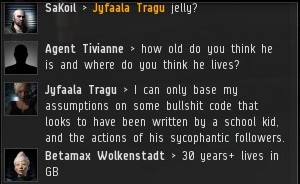 Again with the school references. In Jyfaala's mind, the lowest thing imaginable is a school teacher. Did someone flunk a test recently? 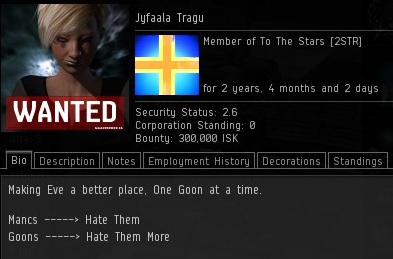 Aside from revolutionary codes of conduct and school teachers, Jyfaala's great hate is the Goons. If so, why isn't To The Stars in nullsec, where they can fight Goons? 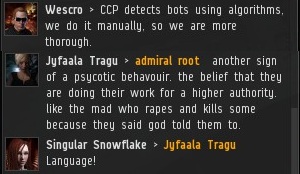 I have the utmost respect for CCP, but I don't think I would classify them as a higher power.

The only part of her rant I might go along with is "dreamer". True, some people say I'm a dreamer--but I'm not the only one. Of course, all men dream, but unequally. Those that dream at night in the dusty recesses of their minds awake the next day to find that their dreams were just vanity. But those who dream during the day with their eyes wide open are dangerous men; they act out their dreams to make them reality.

As time went on, To The Stars became more fixated on conspiracy theories. 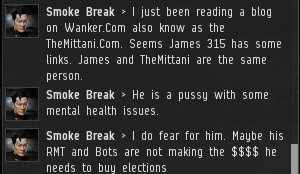 Smoke Break, another great talent, became convinced that I am none other than The Mittani himself!

The Code has the power to lift high the innocent, and to confound the guilty. In their efforts to comprehend it, To The Stars twisted itself into knots. Rather than taking a bold stand against botters and bot-aspirants, the Code is actually about Goon alts trying to feed money into a nullsec botting RMT network so The Mittani can fund his next CSM campaign. No wonder they're so mad at me!
Posted by MinerBumping at 02:39