Tears of the Day: Codification

Some people think I take a sadistic pleasure in bumping miners out of range. Not true. If I had my way, every miner would follow the Code and there would be no need for me to perform even a single bump. 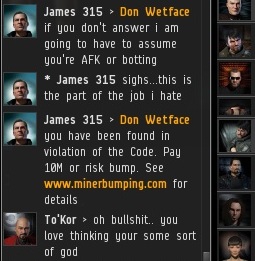 I related this truth to some miners in Halaima, the birthplace of our empire. Highsec miner To'Kor was bumped out of range and retreated to the station, where he remained for the rest of my visit. Still sore, he interrupted my monologue with his cynicism. 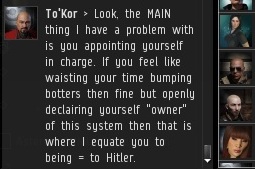 ...and he dropped the Führerbomb in record time. Remember kids, being bumped out of mining range is like the Holocaust. 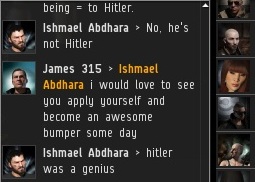 Next, To'Kor challenged the legitimacy of my rule:

To'Kor was confident that he could write better code than the Supreme Protector. Not likely. My Code beats any other code in EVE, hands-down. 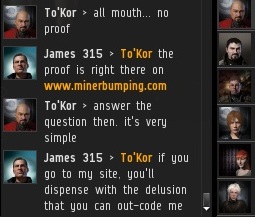 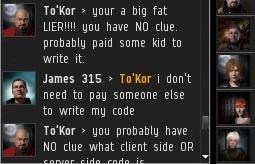 But To'Kor didn't think I was even the author of the Code. Outrageous. 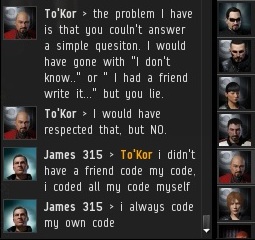 While the Code reflects the best aspirations and ideals of highsec, I was the one who wrote it down, and obviously I deserve credit for that. 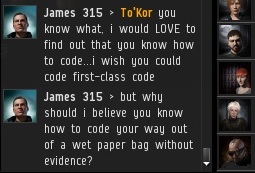 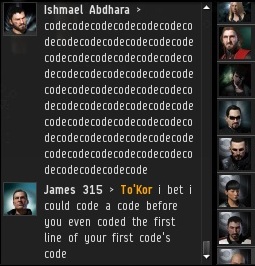 At first, To'Kor refused to even go to my website to read my Code, but I had at least made it available. Where was his oh-so-great code? 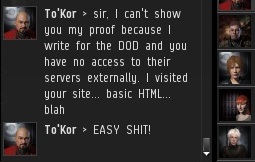 To'Kor finally visited MinerBumping.com and was unimpressed. He claimed his own best code was inaccessible, because he codes for the United States Department of Defense (i.e. the U.S. military). 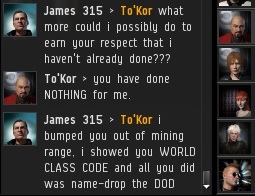 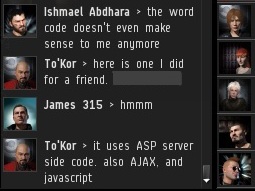 Finally, he relented and gave me the URL for a website where he had done some coding. 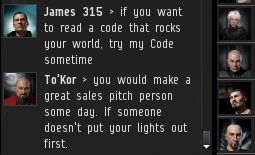 I was not impressed by To'Kor's code. It was a lot of hype for nothing, to be honest.

However, we may have been operating on different wavelengths.
Posted by MinerBumping at 01:42