The Annexation of Sirseshin, Part 2

Previously, on MinerBumping... A fleet of 25 bumping ships took the party from Halaima to Sirseshin, our new system. A disgruntled miner from the past reappeared.

Like many ice miners these days, To'Kor pays for his subscription with PLEX. For some reason he feels entitled to AFK isk and a free subscription to EVE. 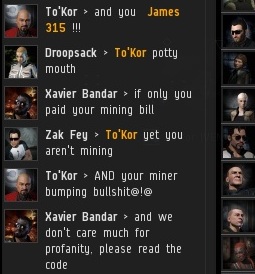 Despite the presence of so much positive peer pressure from my Agents, To'Kor remained a misfit in the new Sirseshin we were building. 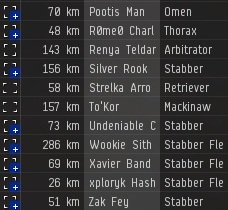 Our fleet had barely introduced itself to the system, and we already outnumbered the miners in the ice field. Miners were fleeing in panic. 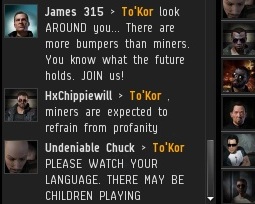 If you can't beat us, join us. And nobody can beat us, because we're Invincible. Therefore everyone must join us. Simple logic. 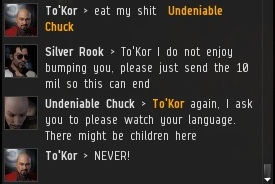 Thirty years of programming code, and To'Kor couldn't figure out how to get with the program by following the Code. The irony!

Agent Pootis Man reported the first victory. The walls of resistance were falling down. 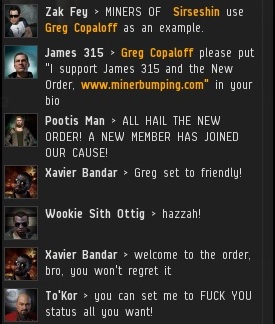 As the New Order celebrated bringing another miner into the fold, To'Kor was still To'Kor. 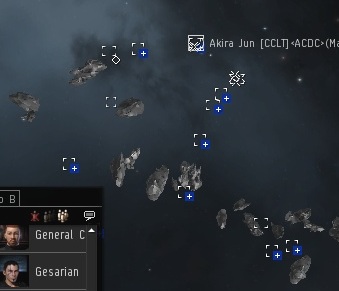 Zak Fey was right. The bumper fleet brought shock and awe to the miners of Sirseshin. In less than 20 minutes, all Code-violating mining had been shut down, and all non-paying miners had been bumped to a safe distance from the ice field. 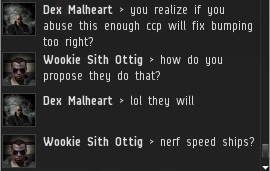 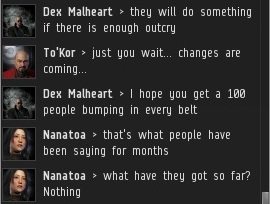 Unable to defeat our Agents in battle, rebellious miners prayed for a miracle from CCP. They just don't get it. You're not supposed to be delivered from good things.

To'Kor vowed to hire mercenaries against me to destroy the New Order. I'm still waiting for my wardec from Vengance Inc., but if they ever have the courage to start a fight with me, I'm pretty sure I'll win. With a kill-to-death ratio of around 31, 31.25, something like that? 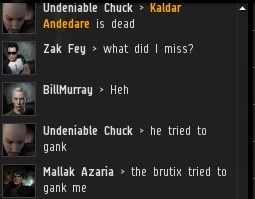 The visit to Sirseshin was capped by an act of desperate violence against Agent Mallak Azaria. The perpetrator was Kaldar Andedare, who had been stalking our fleet with his gank brutix. He looked familiar, but I couldn't place him. Oh well, he blew up.

Kaldar suffered a loss of more than 50 million isk, and his pride. Sirseshin remained in good hands.
Posted by MinerBumping at 02:21