The New Order has a long history of dealing with anti-Order resistance movements. These rebellions always end in failure, and occasionally their leaders will even switch sides to join us. It's hard to fight when you're AFK, and even harder when your opponents are Invincible.

The latest resistance movement, the "Proveldtariat", is led by carebear enthusiast Anslo. Those who frequent EVE-O may recognize Anslo, a prolific pro-carebear forum warrior. The "bears" may not be interested in playing EVE, but they are passionate about protecting their AFK lifestyle. The following is an example of a post by one of Anslo's fellow travelers, scrubbed from EVE-O but preserved by Eve-Search:

It's beyond me how anyone could argue with a Code that promotes balance. Even Anslo himself will occasionally lose his temper on EVE-O:


Of course he's ******* entitled to do what he wants you stupid bullet eating bleach dyed bimbo ****, he paid for the gods damn game and he should be able to play as he see's fit.

This whole "they're not entitled" bullshit pisses me off. I paid for x, I want x, not a part of it that you think I don't deserve, ALL of it. The barrier of entry is stupidly high for solo people who want to pvp in their spare time. Because not all of us can dedicate our damn LIVES to a pirate or nul alliances because we have jobs, spouses, kids, LIVES OUTSIDE OF EVE.

So don't go on that self entitled bullshit **** parade you tit. He paid for it, he should be able to experience it.

By now you've probably guessed that the world of carebear forum warriors isn't exactly a breeding ground for dynamic, successful movements. But that doesn't mean the Proveldtariat won't give it their best shot. 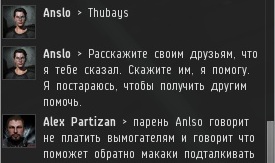 Anslo arrived in Tolle not too long after our vacation there began. He was eager to build relationships with the locals, even if it meant speaking a different language. To Google Translate!


Anslo > Thubays
Anslo > Tell your friends that I have told you. Tell them I'll help. I will try to get other help.
Alex Partizan > Anlso guy says not to pay extortionists and says that will help to push back the macaques

"Macaque" is a kind of monkey. As Virginians know, it's also an old racial slur used against Africans during the days of colonialism. Which is appropriate, as Anslo's quest to help the "natives" defend against the New Order increasingly takes on a "White Man's Burden" quality. 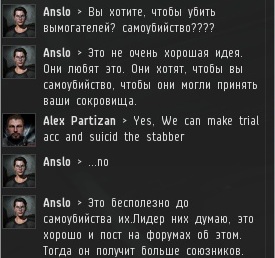 Anslo continued to urge the miners not to take arms against us:


Anslo > You want to kill extortionists? suicide??
Anslo > This is not a good idea. They love it. They want you to commit suicide, so they can take your treasure.
Alex Partizan > Yes, We can make trial acc and suicid the stabber
Anslo > ... no
Anslo > It is useless to suicide, they think it is good and post on the forums about it. Then he will get more allies.

My favorite part of the translation is that we want to take the miners' treasure. 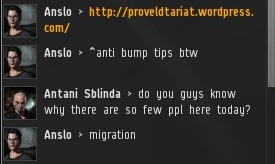 Even the resistance has noted the desertion of rebel miners from Tolle and the surrounding systems. 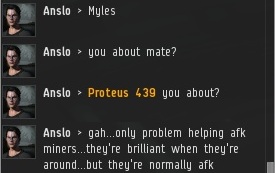 The kind of frustration Anslo displayed here is one of the main reasons our enemies often switch sides. EVE is much more fun for the New Order. 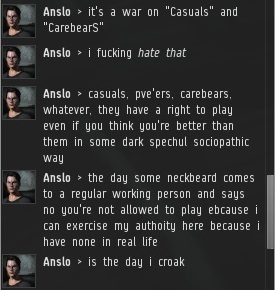 Anslo objects to our enforcement of the simple, elegant rules of the Code. Yet as leader of the Proveldtariat, he spends most of his time trying to tell others what to do.

Trying to gather screenshots of the miners making me rage? That would make for a great blog, in Bizarro world! 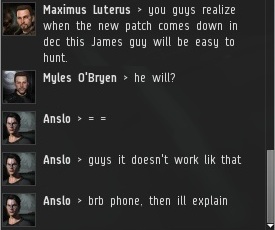 You know the miners are in bad shape when they need Anslo to explain game mechanics to them. He has continually encouraged them to adopt his anti-bumping techniques, promising success if only the miners will listen. But then... 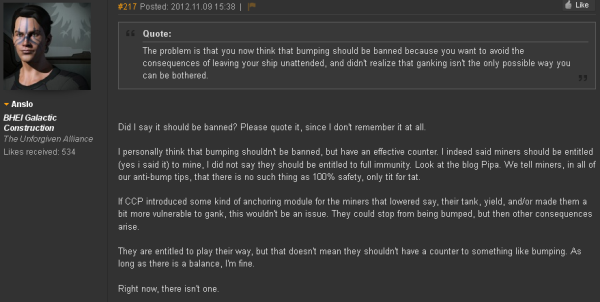 Anslo dropped a bombshell by admitting on EVE-O that he thinks there is no effective counter to bumping. He then started begging CCP to create a brand new module with the sole function of defending miners against being bumped by Agents of the New Order. Up until that point, I think many of us in the New Order at least gave Anslo credit for encouraging the miners to take action, as opposed to filing frivolous petitions and crying to CCP.

Anslo's tireless efforts to help the miners of Tolle largely go unappreciated by the miners themselves. As Anslo's frustration with the miners grew, it was only a matter of time before a diplomatic incident occurred... 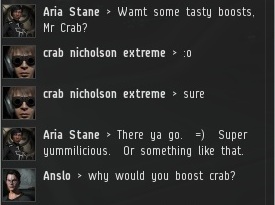 It started innocently enough. An Orca pilot offered bonuses to crab nicholson extreme, a Code-compliant miner who is as popular among his fellow miners as he is among the New Order Agents.

Photogenic and articulate, crab is a rising star in Tolle. He is often spoken of as a model miner and a symbol of the future of highsec mining under New Order rule. 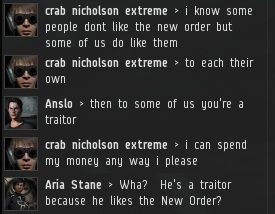 Anslo couldn't have it. He was infuriated by the idea of a pro-Order miner. 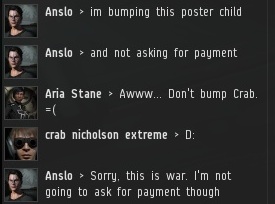 At his wits' end and out of patience, Anslo finally lost it. He did the unthinkable: The self-proclaimed leader of the movement against miner bumping... began bumping a miner.

I would say our enemies have reached the bottom of the barrel when their idea of resistance is bumping miners. Not only did Anslo bump a miner, he was bumping the most beloved of the Tolle community. How would the other miners react? Could Anslo salvage the situation, or was the Proveldtariat's credibility about to take a nosedive?

To be continued...
Posted by MinerBumping at 03:21