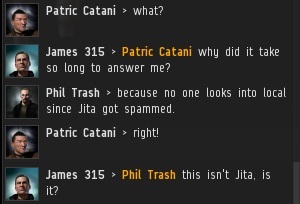 Another day, another ridiculous excuse for a miner not responding to me within 5 seconds when I call.

It didn't take long to realize that Patric Catani was a newbie when it came to the New Order. In my view, it doesn't matter how long you've played EVE. I have more respect for a day-old newbie who's acquired total familiarity with the Code than a 10-year vet who's clueless. 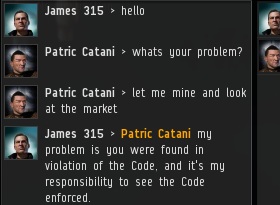 After I forced Patric to retreat from the ice anomaly, he invited me to a convo. I assumed I would be treated to some pleasant conversation, if not an outright apology. But it was an ambush, and he immediately sought to put me on the defensive. 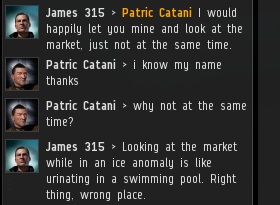 I don't use metaphors and similies just to make myself look cool--I look cool enough as is. Rather, I create word pictures for the miners I educate, because they stick in a miner's mind long after our session. 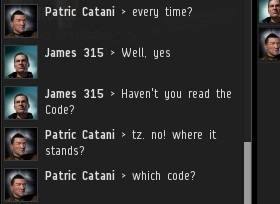 Strange, but true: Even in this day and age, there are still people who haven't read the Code. 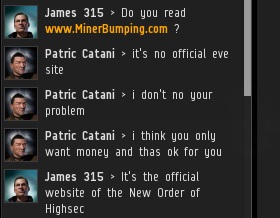 CCP doesn't need to create a website for it to be an official EVE publication. You won't be banned for violating the Code, but bans aren't the only things that can prevent you from mining. 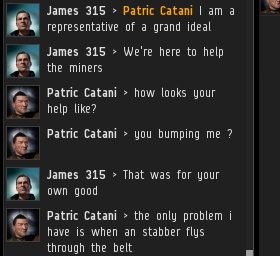 You know, it's funny. Everyone looks down on "yes-men", or so they claim. But they get a different attitude the moment you start telling them hard truths instead of what they want to hear. 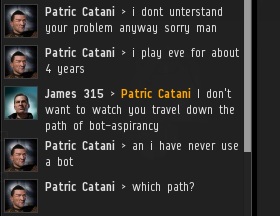 More often than not, it is your friend--not your enemy--who tells you the things you don't want to hear. Carebears are the exception to the rule, because they'll say just about anything when they get angry. Ignore them. 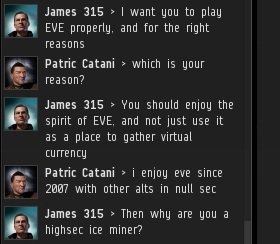 You would be amazed how quickly highsec miners will confess their crimes if you establish a rapport them, as I do. Patric admitted that he had been a nullsec resident since 2007. He therefore had no business becoming a highsec ice miner. 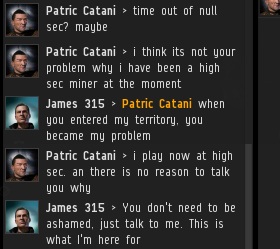 Patric realized his mistake. Then he clammed up and refused to explain what had happened to transform him from a proper nullsec miner into an illegal carebear. 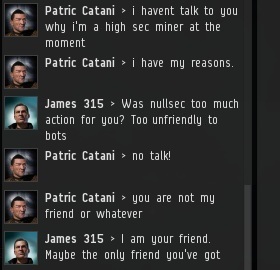 The conversation that began with Patric asking me "what's your problem?" was now an intervention aimed at discovering Patric's problem. He didn't like it, so he left. Though I am a friend to everyone who mines in highsec, I am also their surrogate parent--the Father of the New Order. Sometimes a parent rewards his children, such as giving them credit for purchasing a mining permit. Other times punishment--such as bumping or ship destruction--is called for. A good parent does not abdicate his responsibilities in an attempt to curry favor with his children. I sincerely hope Patric understands that what I did was out of love, not malice.
Posted by MinerBumping at 19:26