I'd put some flavor text here, but I know you just want to see the kills. I understand that. Without further delay, here are some kills to ponder; they took place during the week of July 21st @ 00:00 EVEtime through July 27th @ 23:59 EVEtime. 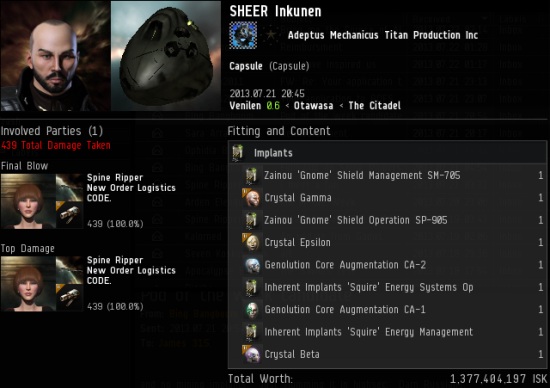 SHEER Inkunen managed to lose a 1.3 billion isk pod to Agent Spine Ripper. And what did SHEER use to protect his massive implant investment--which included some pricy shield implants? Oh, just a completely untanked Retriever. "Sheer" indeed. But he was mining in highsec, so who's gonna stop him? The New Order, that's who. He obviously wasn't using the shield implants, though, so no big loss. 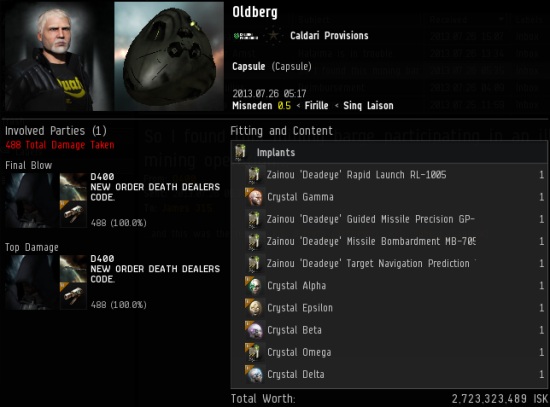 My goodness! Oldberg lost a 2.7 billion isk pod, including even more Crystal implants. Agent D400 is so good at sniffing out these expensive pods. Surely Oldberg wasn't as reckless as SHEER. No, he wasn't. He was even more reckless--flying a completely untanked Retriever, this time in a 0.5 security system. Out with the Oldberg, in with the New Order. 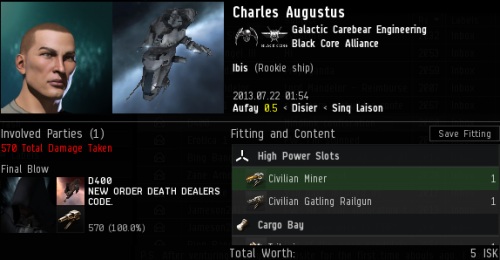 Charles Augustus lost this 5 isk Ibis, which was deemed to represent an imminent threat of illegal mining. Owing to its Civilian Miner, an Ibis is considered a mining vessel. But because it carries a Civilian Gatling Railgun, it's also considered a combat ship, so Agent D400 didn't just gank him--he won an honourable 1v1 duel. Why am I highlighting this kill? Well, recall what I said earlier about D400 and his pod-sniffing abilities: 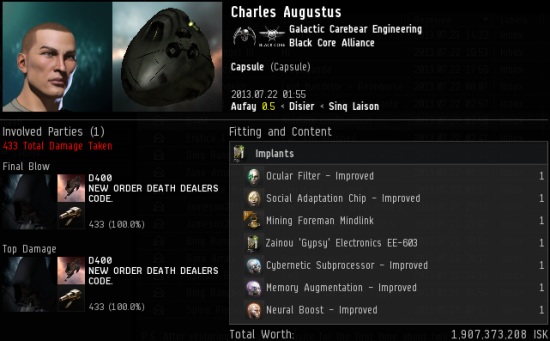 Yes, that is a 1.9 billion isk pod he found lurking in the Ibis. Check out the Mining Foreman Mindlink amidst the wreckage. A New Order Agent's instincts never fail. 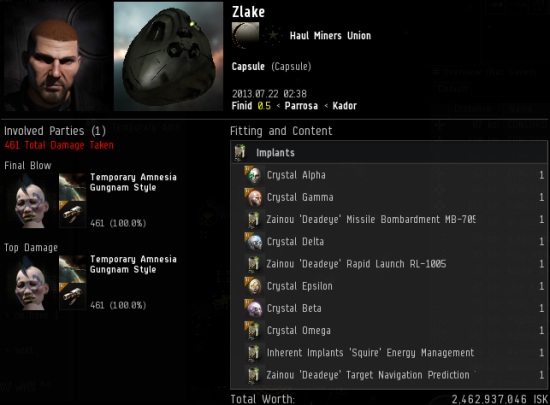 What's with all of the expensive pods lately? Our Knights are ganking capital ships' worth of isk these days. Zlake lost a 2.4 billion isk pod when Agent Temporary Amnesia reminded him of his responsibilities under the Code. Crystal implants yet again. Fortunately, this time the miner was actually making good use of them: His Hulk was ganked in a 0.5 security system, equipped with a Small Shield Booster II. He had no other tank; midslots and rigslots were left empty. 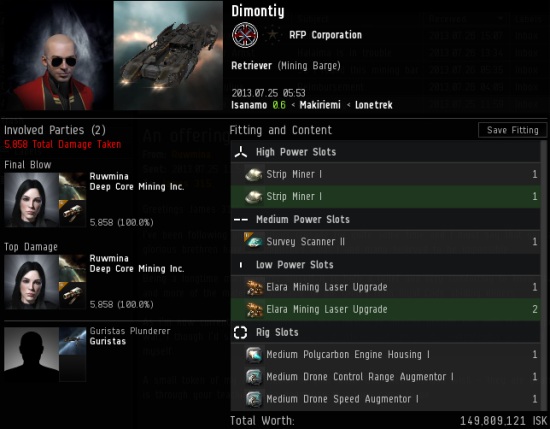 Now for a really unusual specimen. Dimontiy lost a 150 million isk Retriever. Like the rest of the gang today, he had no interest in tanking up. Instead, he equipped a couple of drone rigs and, remarkably, one speed rig. He needed those drone rigs, though, because his ship also contained Federation Navy drones. You certainly want to get the most out of those when you're mining in highsec.

Agent Ruwmina gracefully killed Dimontiy. Later that same day, Ruwmina renewed their acquaintance by killing him again in the same system. Dimontiy had learned his lesson: The second Retriever he lost was only worth 88 million isk, and included shield rigs. Dimontiy was apparently happier with his second death, so later in the day he resumed mining in the same system with the exact same fit. The result? Ruwmina returned and popped him yet again. That's the definition of bot-aspirancy: Doing the same stupid thing over and over while hoping for a better result.
Posted by MinerBumping at 23:42