Previously, on MinerBumping... Among the bronies of the Cutie Mark Crusaders Militant Coalition, there were a few bad apples. Botten Miromme raged against the New Order before jumping ship to a different corp. But then that corp's alliance declared war against the corp to which Agents Lord Mandelor and Father Julius belonged.

After Botten suffered a grievous loss in the war, he suddenly left his new corp. Julius demanded an explanation. 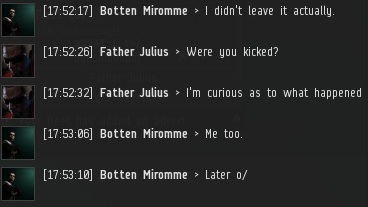 Botten suggested he had been kicked, presenting a new mystery. What was at the source of all this nonsense? 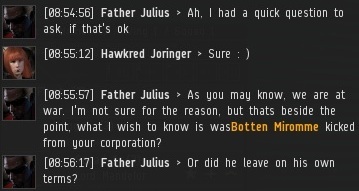 Father Julius and Lord Mandelor went directly to the hostile corp's diplomat, Hawkred Joringer. She was more than happy to speak with them. 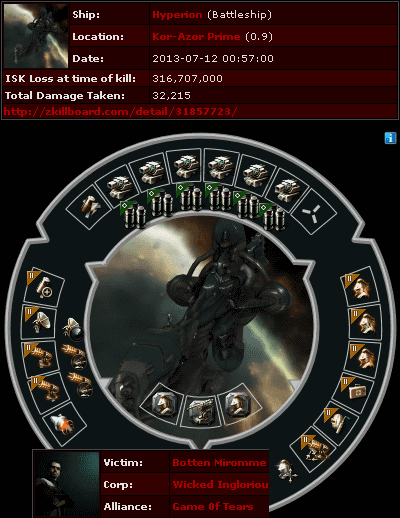 Specifically, his Hyperion loss raised doubts about his ability to PvP.

Hawkred was able to shed some additional light: Botten had indeed been behind the wardec.

As our Agents suspected, Botten was up to his usual tricks. When the truth was uncovered, it didn't win him any friends among his new corp.

Though a wardec was still active, the two sides came together. They bonded by sharing tales of Botten's incompetence.

As usual, where the rebels spread chaos and disorder, the New Order brings harmony and friendship. 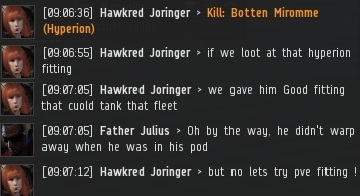 A brony might say that friendship is magic. We in the New Order have a more scientific view. Friendship is built on trust, integrity, respect, honour, and a Code firmly grounded in common sense.
Posted by MinerBumping at 20:54