The Rumble in Vattuolen, Part 3

Previously, on MinerBumping... caveywavey flew into a rage when his Hulk was relocated during a routine bumping operation. As tensions rose, threats of violence were murmured in the belts. 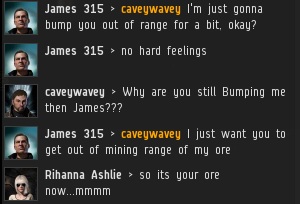 One way of defusing a potentially volatile situation is to calmly explain what you're doing while you're doing it. 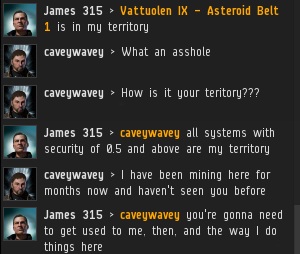 It was very important to help the illegal miner understand that he was being punished for his crimes, and that I was not taking action out of any ill will directed toward him personally. 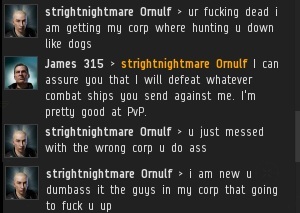 Meanwhile, strightnightmare Ornulf threatened to send his entire corporation against me for interfering with his Retriever.

I did my due diligence on strightnightmare's corp. They posed no threat.

After informing strightnightmare that his corp was in a uniquely bad position to fight me, he immediately surrendered. 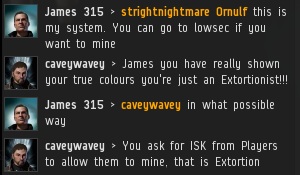 Suddenly caveywavey experienced a revelation: This was extortion! 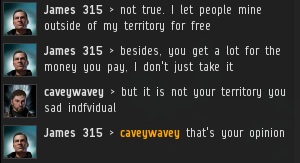 During periods of upheaval, there are often conflicting geopolitical claims to a territory. I contended that the system belonged to the New Order, while caveywavey insisted that highsec belongs to no one. The trouble is, "no one" is not a very organized or passionate interest group. The New Order has the edge.

As is my custom, I defended myself against all the aspersions being cast against my character. Having successfully defended my honour, I resumed my important work. 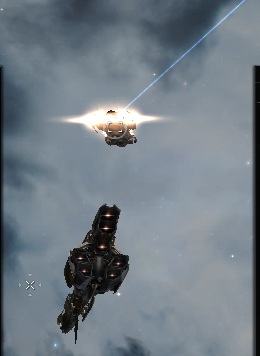 caveywavey had devilishly crept back to the ore. But after he activated his mining lasers, I pounced. Another victory for the New Order! 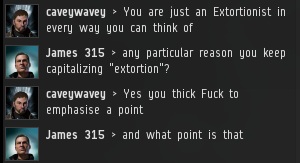 caveywavey worked the "extortion" square in Miner Bingo like it was going out of style. For some reason, he kept capitalizing it. Did he have a unique take on the subject?

...No, he just preferred to capitalize his favorite words. 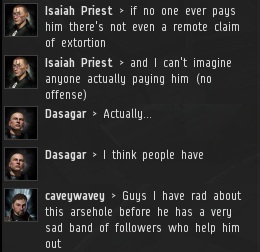 Fortunately, things began to quiet down in Vattuolen. Yet it was an eerie calm. 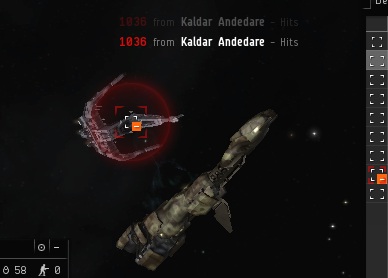 Out of nowhere, a Caracal that had been yellowboxing me opened fire. Murder! Betrayal! Was this the end of the New Order, or would my Invincible Stabber demonstrate its Invincibility once more?