Given the toxic attitude of bot-aspirants toward the reigning government of highsec, it's never a surprise when they vent their impotent rage at "the man". All good citizens of highsec know that the proper thing for miners to do is to pay their taxes, keep their heads down, and say "yes sir" or "no sir" when an Agent comes calling. Unfortunately, some carebears would rather abuse the legal system. Normally threats of legal action don't get very far, because few lawyers would be willing to take a Code-violator's case. Who would want to represent a bot-aspirant, after all? But in highsec, there is such a lawyer. 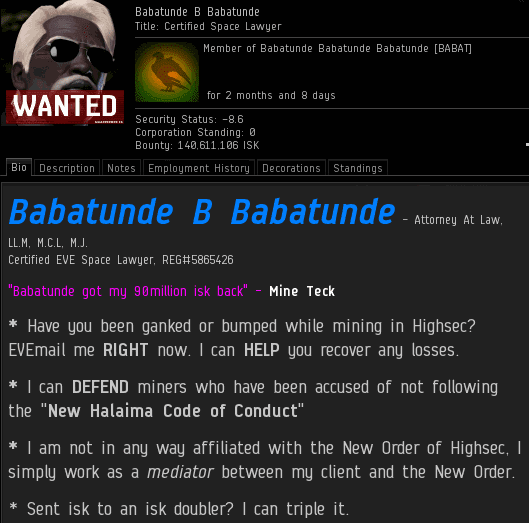 Yes, it's Babatunde B Babatunde, the well-known space lawyer of highsec. From day one, his mission has been to tie up the New Order in red tape and rack up attorney's fees. Highsec ice miner Mikalent got into a dispute with Agents of the New Order, so he immediately contacted Babatunde and told him his story.

Right away, we can tell this is a frivolous lawsuit. Mikalent didn't get more than two sentences into his story before admitting that he was violating the Code by Skyping with his daughter--when he should have been keeping his eyes fixed on local. Hey, I'm all for family values, but at least ask an Agent for permission first. Otherwise, what kind of message are you sending your child?

Because they're protected by attorney-client privilege, clients are encouraged to be totally forthcoming with their lawyers and admit any potential weaknesses in their case. Mikalent confessed that he was "semi-guilty" of AFK mining. Excuse me? The New Order believes in quaint concepts like "right" and "wrong". There are no shades of gray here. 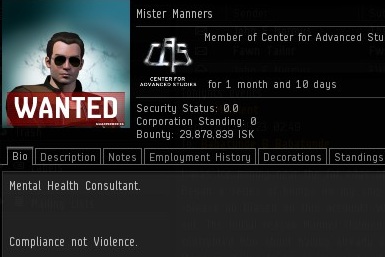 The Agent in question, Mister Manners, passed all background checks with flying colors. No one has any dirt on him. Just look at that bio--clean as a whistle. Obviously he was just doing his job, busting punks.

According to Mikalent, the Agent on duty could find no evidence that Mikalent owned a permit. But since Mikalent had claimed a permit and was guilty of violating the Code, either (a) Mikalent lied about owning a permit, or (b) Mikalent bought a permit but stabbed highsec in the back by turning against the Code. In either case, Red Pen penalty was appropriate, so an additional 20 million was charged.

Mikalent claimed he was falsely accused of a crime--a crime to which he previously confessed--and that he was being extorted. Outrageously, Mikalent also claimed that there is no provision in the Code that allows permits to be revoked...


"Moreover, to ensure the New Order community lives up to my expectations, those who already have purchased indulgences may forfeit their place of honour if they violate the Code." New Halaima Code of Conduct.

Mikalent concluded by accusing his friendly neighborhood Agent of discriminating against him and besmirching his name within the community. It's true that the New Order discriminates. We discriminate between good and evil. Since when was it politically incorrect to have the courage to stand up for what you believe in? In the New Order, protecting innocent people and punishing guilty people never goes out of style. 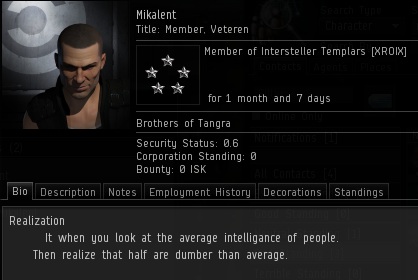 As for besmirching Mikalent's name, there's no way for an Agent to be charged with this. Highsec carebears exist in the shadows, in silence and obscurity. No one knows them. They only interact with the game when the Agents of the Order make them interact with it; carebears have no name or notoriety unless we raise them up from oblivion. In other words, we make the highsec carebears. There's no way to besmirch a carebear's name if he had no name to begin with. Ultimately, Mikalent apparently left highsec to join a nullsec renter alliance, Brothers of Tangra. Their alliance ticker is "B0T". That's good, because we don't need litigious miners in highsec. I'd rather EVE had B0T-aspirants than bot-aspirants.
Posted by MinerBumping at 22:13