Where Have All the Bronies Gone?

In the past, I have related the adventures of the Cutie Mark Crusaders Militant Coalition, a group of bronies with an affinity for illegal mining operations in highsec. brony2893 and Botten Miromme vowed to resist the New Order with every fiber of their being.

Though headquartered in the Ikao system, Botten decided to pay a visit to Kino, where Agent Bing Bangboom worked tirelessly to improve the lot of the miners.

Having made the acquaintance of some fellow rebels, Botten attempted to convince Bing that the New Order had finally met its match:

Botten Miromme > Do you know what has happened to every person/group/orginization that has tried to impose their rediculous idea of control on people who don't want it?
Bing Bangboom > WHAT are you talking about.... the only group controlling this system is the New Order.
Bing Bangboom > We all know what happened to us.
Botten Miromme > They are A)Infiltraded (We've already done that) B)A resistance is formed (Done that too) C)That group gets crushed (Already there)
Botten Miromme > As much as you'd new order freaks would like to claim you got anything changed...you havn't lol

Finally, Botten challenged the New Order to engage in some "real" PvP:

A few days later, Botten himself got the chance to face a New Order Agent in battle. 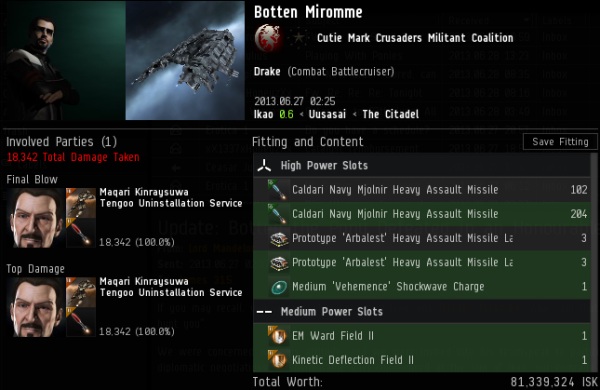 Botten had arranged for a duel ending in structure, but there was a tragic accident: 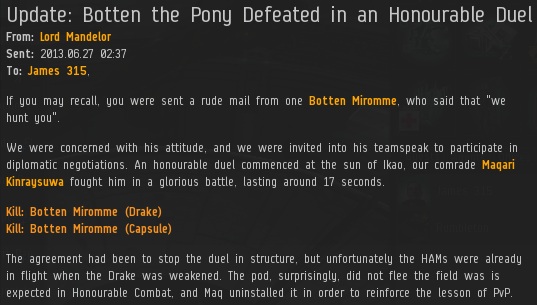 Botten's pod was also popped by mistake. This is EVE combat, there are inherent risks. Everyone knows that. But Botten was never quite the same after his stinging loss. Senselessly, he came to MinerBumping and made scandalous accusations in the comments section of a Grab Bag post:

Unfortunately, things only got worse for Botten and his fellow rebel, brony2893. The awesome power of the New Order continued to make itself known in the Ikao system. Their fellow bronies began to see the rebels as a liability.

Not for the first time--or the last--the toxic nature of anti-Order resistance ended up getting some rebels kicked out of their own corp.

Newly homeless, brony2893 decided to create a 2-man corporation, Orange Star Coalition. At least he can't be expelled from this corp. 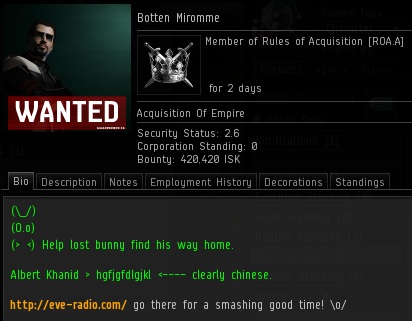 As for Botten, he managed to find another corp, Rules of Acquisition, that didn't know about his shady past. In the meantime, the Cutie Mark Crusaders Militant Coalition didn't seem to miss their former colleagues. Bronies may have a stigma attached to them, but there's nothing worse than being associated with the resistance.
Posted by MinerBumping at 21:45