Previously, on MinerBumping... Aliosis II of the elite nullsec alliance Black Legion. had an alt declare war against me for bumping his miners. In a deft stroke, I won the war, but Aliosis didn't seem to be aware of it. I told him that I voided his wardec by closing and reopening my corp. Aliosis logged another alt, one he claimed had valuable information from a GM...

Out of nowhere, another corp declared war against me. As far as I could tell, the belligerent corp didn't have any association with Aliosis or his alt. 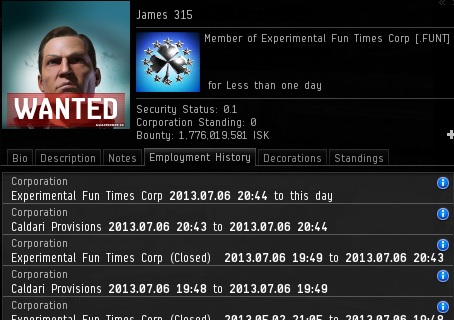 With split-second timing, I performed a hair-raising maneuver. It was high risk, high reward: I won the war, and the Experimental Fun Times Corp rose like a phoenix from its ashes. It was the eleventh war won--550 million hostile wardec fees down the drain. 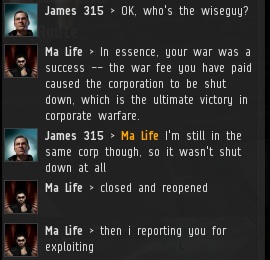 I demanded to know who was behind the latest act of aggression, but it only got me another petition threat from a random local. 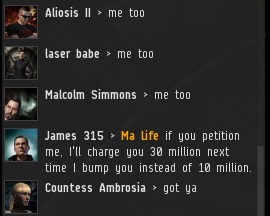 Things were heating up. It looked like another late night for the overworked GM staff. The New Order is good for Iceland's economy, though--they'll need to open up a new branch at CCP just to handle all of the New Order-related paperwork. 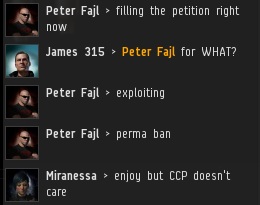 Out of nowhere, a gentleman named Peter Fajl appeared, vowing to get me expelled from the EVE galaxy for good.

Peter was the CEO of Dirty Bastards, the corporation that Aliosis had gotten to wardec me in the first place. Judging by Peter and Aliosis' character portraits, they were one and the same. 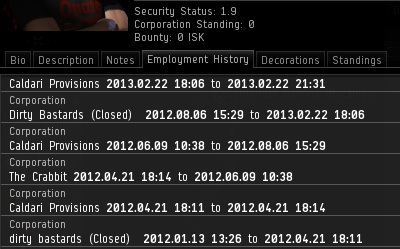 I couldn't help but notice that Dirty Bastards had closed and reopened its own doors a few times over the last year and a half. Carebear hypocrisy at its finest. 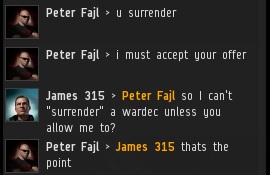 At my urging, Peter went into a little more detail about the "exploit" that I had allegedly used. He couldn't understand how my corp had "surrendered" without his permission. I guess he didn't realize whom he was dealing with. I'm the Saviour of Highsec. I don't ask for permission, I take what's mine.

I invited Peter to a private convo so we could discuss our problems in a more casual setting, but he was a man on a mission. He immediately closed the chat and resumed work on his petition. 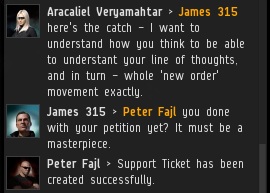 Finally, Peter announced that he had completed the missive. Now it was up to CCP. 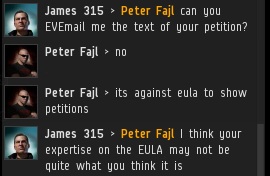 I've occasionally gotten good results by asking carebears to forward me a copy of their petitions, but Peter was like a rock. He wouldn't budge. 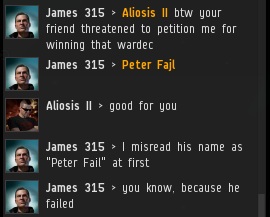 Meanwhile, I tried talking to Aliosis directly, but we were no longer on speaking terms for some reason. It may have had something to do with a wardec that didn't go well for him, I don't know.

After a long time, a lightbulb went off. He finally got it. For any aspiring Agents out there, this is the moral of the story: You may encounter a "problem" student who doesn't seem capable of learning. Don't you believe it. If you keep at it, eventually you'll achieve a breakthrough. Sometimes the slowest pupils can be the most rewarding to teach. No miner left behind.
Posted by MinerBumping at 21:45