Loose Ends: The Curse of the Red Pen

Some miners take the Code seriously. Others do not. In the future, I would like to see no less than 110% of all highsec miners in total compliance with the Code. In the meantime, the occasional punishment is necessary. After all, though I am merciful, I am also just. The most severe violators of the Code are put on the Red Pen list. Again, some miners take this seriously, while others do not. Today, I present you with the story of one miner who suffered the consquences of being Red Penned.

A few weeks ago, we heard the tale of Carbuilder Hemah, who engaged in extreme and profane acts of resistance when confronted by Agent Arden Elenduil. 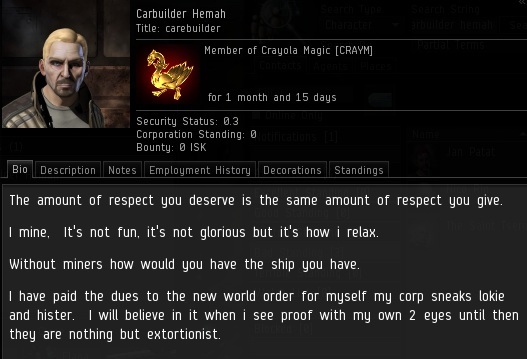 Carbuilder had become infuriated when Arden exercised a perfectly valid kill right against one of Carbuilder's corpmates. 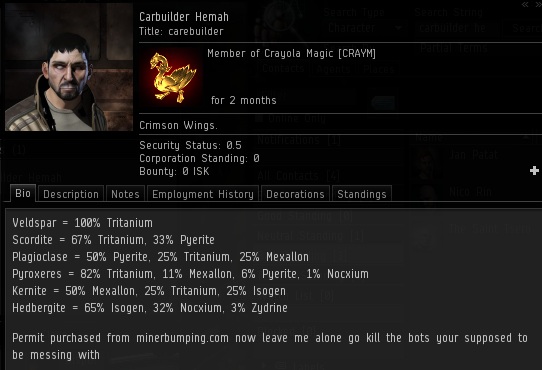 Eventually, Carbuilder's corp made him pay Arden 420 million isk to get the corp into compliance with the Code. This was much more money than would normally be paid, because Carbuilder's profanity had gotten him Red Penned by Arden.

Further controversy resulted from the MinerBumping post itself. Carbuilder had been in a private convo with Arden. During the convo, Carbuilder secretly insulted members of his own corporation. They weren't pleased to hear about it. When Carbuilder learned that the private convo had been displayed for all to see, he fired off an angry EVEmail to Arden:

no problem btw i dont recall you asking if you can place our conversation on a public website you know that is against eh law? Its considered defamation of character I shall ask you to pls remove it. As you can see im not a some dumb miner i do know my rights. For you to place a private conversation between myself and you, you have to ask my permission. you can post what was said in public chat all you want but in the private conversation that is another story.

Not satisfied, Carbuilder went to the MinerBumping post and left some comments there, as well:

I was stunned when I learned about these comments. Carbuilder may have been many things, but I never took him for a space lawyer. 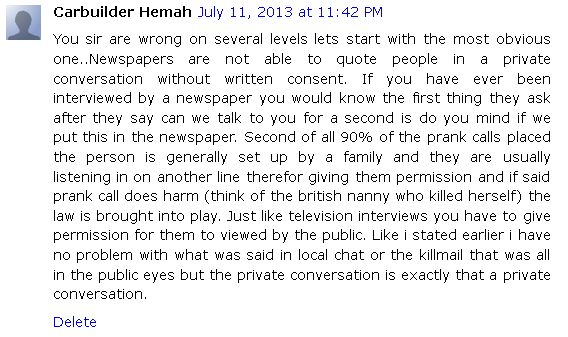 When other commenters gently reminded that he was being foolish, Carbuilder doubled-down on the space lawyering. He was now guilty of another grievous violation of the Code. Then things started to get interesting.

Enter Erotica 1. She is perhaps the most famous isk-doubler in Jita. With 24 billion isk invested in the New Order, she's also our biggest shareholder. One day, as she was doubling isk for a customer, she opened a special bonus room for him. Every hundredth customer gets the chance to win big--as long as they follow the rules. You might recall the case of Hydra Fire, who tried to deceive Erotica 1 during a bonus round, and ended up losing all of his in-game assets.

Now it was some other lucky customer's turn. It just so happened that the customer was none other than Carbuilder Hemah himself. After one successful doubling, Carbuilder handed over 400 million isk to Erotica 1. She invited him to a bonus room. But he wasn't sure about whether he should take the plunge or not. To help steel his nerves, Erotica invited him to join her TeamSpeak server. Fancy Space Tourist recorded the entire event, and posted the recording to SoundCloud. Here's what happened.

At 14:40 in the recording, after supplying Erotica with the necessary API information, Carbuilder had second thoughts about the whole thing. He noticed that there was someone he recognized in the crowded bonus room. By coincidence, Arden Elenduil was there. This prompted a conversation in which Carbuilder explained why he didn't like Arden or what he stood for.

Eventually, however, Carbuilder was coaxed into participating in the bonus round. Thus began the process of Carbuilder handing over all of his in-game assets, including all of his ships:

By 46:00, Erotica was able to calculate a sizable payout that Carbuilder would soon receive. It suddenly occurred to Erotica that Carbuilder would win even more money if he got his hands on some corp assets and turned those over, as well. But Carbuilder wasn't comfortable with this, since his corp was still upset about "the MinerBumping shit". Carbuilder went into greater detail about the incident covered by the MinerBumping post. He revealed that he was actually in control of the Hulk when Arden destroyed it. He confessed that his corp engaged in systematic acts of account sharing. Erotica recommended that Carbuilder file a petition to CCP to report his CEO for account sharing. However, Carbuilder said that it was only "a one-time thing", which he did because he needed PLEX.

By 1:01:45, Carbuilder was ready to receive his payout. Erotica explained that there were a few traditions for bonus room winners, including the singing of a song. Reasonable enough. But Carbuilder was reluctant to sing, because his wife and three small children would overhear him. Undaunted, Erotica urged the other bonus room occupants to find an appropriate song for Carbuilder to sing.

At 1:08:50, Carbuilder was asked to sing the theme song to "My Little Pony". No brony, Carbuilder hotly refused. As a grown man, he was disgusted by the idea, especially since his family would hear it. As a compromise, Erotica asked him to read, aloud, a Wikipedia article about Saint Olga of Kiev, a fascinating woman who lived in the tenth century. Carbuilder agreed, and it took several minutes for him to get through it.

At 1:19:00, Carbuilder finished reading the article, but once again refused to honour Erotica's rules and sing a song. In response to Erotica's request, Carbuilder offered a brief summary of how he had given away all of his in-game assets. He confessed that with his bonus room winnings, he would buy a few months of PLEX. Erotica then asked Carbuilder to entertain a hypothetical situation: What would he do if it was all just a scam?

Erotica reassured Carbuilder by telling him that he would still win big, if only he would sing a song, as the rules required him to do. Carbuilder grew silent. He explained that his wife was "chewing him out" for making a fool of himself. Sadly, he would not comply with the rules, and all of his assets were forfeit.

Finally, Erotica 1 reminded Carbuilder that she was the New Order's biggest shareholder, which Carbuilder already knew. She asked if he would give his permission for the recording of the day's events to be posted on MinerBumping. Carbuilder refused. Luckily, Fancy Space Tourist, the owner of the recording, was more than happy to have it linked here.

In the end, we all learned something, I think. The Red Pen is a pretty big deal. Those who follow rules are richly rewarded. Those who prefer to break rules--whether the rules of the EULA, the Code, or of Erotica 1's bonus room--end up like Carbuilder Hemah. Dear reader, are you a rule-follower or a rule-breaker?
Posted by MinerBumping at 21:03