Hydra Fire isn't always the best person from whom to get advice. He's right about my taking screenshots and putting them on a website, but he's wrong about why people end up looking like ignorant fools. Blaming me for that is like a reality show contestant complaining about their "edit". 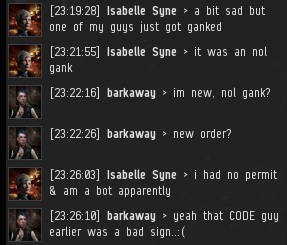 If you see someone from the CODE. alliance, don't take it as a bad sign. Think of it as an opportunity to be taught a lesson, like if an august professor happened to sit next to you on an airplane. 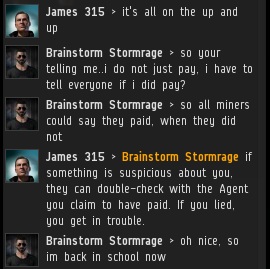 Brainstorm Stormrage isn't the first highsec resident to bristle at the first sign of authority. It's a universal fact that there will always be people complaining about the government. In highsec, the New Order is the government. We take it all in stride. Bullies take your lunch money away. The New Order is nothing like that. We're the ones who make it possible for you to make money in highsec in a responsible fashion in the first place. Think of it as a restaurant taking your lunch money and giving you lunch.

This is a rare instance of someone using the adjectival phrase "North Korea ass" to describe what less-creative miners would call "extortion". 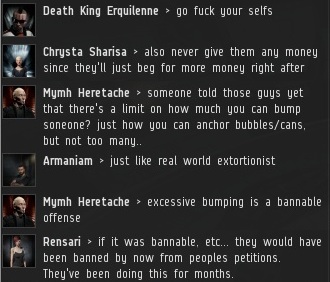 Budding space lawyer Mymh Heretache developed a new theory to explain why CCP has waited so long to ban us: It's only excessive bumping that's illegal. 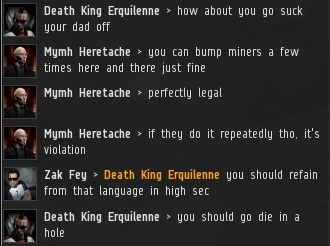 Here's the thing: There's no such practice as "excessive bumping". You can never bump enough.

Though I've been waiting for someone to successfully collect a bounty on me since the first one was placed in October 2011, I give Kazu Tau some credit: At least he knows exactly what he would spend it on. 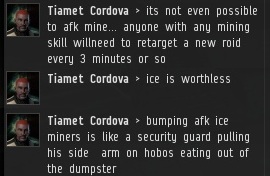 I might agree with Tiamet Cordova's similie, if dumpster-diving hobos were the greatest threat to law and order in highsec. 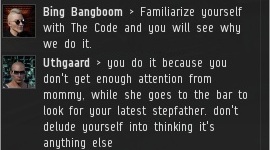 Uthgaard is bitter and cynical about the New Order's great fame. We get a lot of attention for what we do, but that's not why we do it. We would still be enforcing the Code, even if we weren't guaranteed to become EVE rock stars. 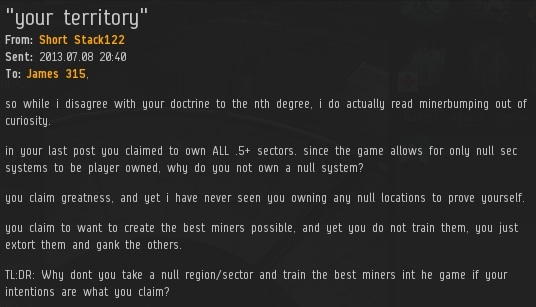 Since the beginning, the highsec miners have attempted to distract us from our purpose by pointing to others' bad behavior. "What about the mission runners? What about the bots in nullsec? What about the station traders?" Miners of highsec, we have plenty to worry about just dealing with you. 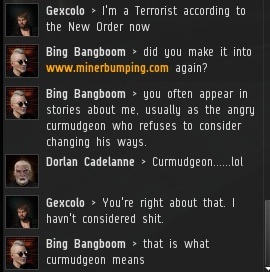 It's sad to see that the carebears actually embrace their ignorance. I wish I could impart to them the joy of learning. A mind is a terrible thing to waste. 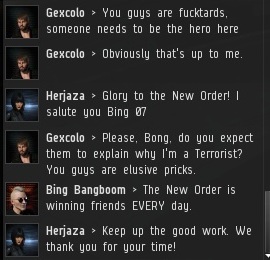 Gexcolo is right about one thing. Someone in highsec does need to be a hero. And fortunately for everyone who lives and works in empire space, there was a hero to be found in highsec. Hi. I'm James 315. I'm from the New Order and I'm here to help you.
Posted by MinerBumping at 20:20