We all had a blast celebrating the New Order's birthday last month, but now it's time to get back into the swing of things. We all have normal lives, after all. Let's take a closer look at some interesting kills made by the New Order during the week of June 30th @ 00:00 EVEtime through July 6th @ 23:59 EVEtime. 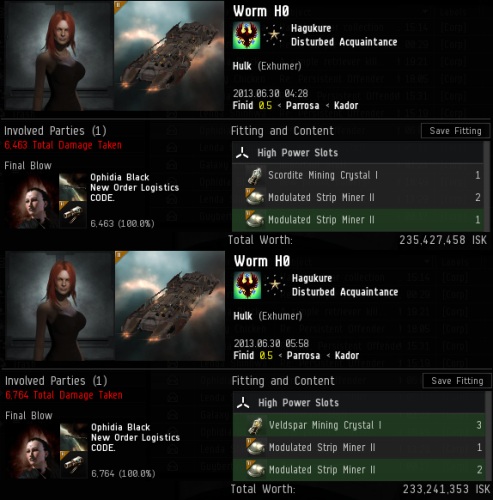 KILLMAIL KILLMAIL
What's this? No, you're not seeing double. Illegal miner Worm H0 learned that when it comes to rebelling against the Code, persistence doesn't pay off--it just gets you killed twice. Agent Ophidia Black paid a follow-up visit to Worm an hour and a half after the first Hulk kill. Worm hadn't learned her lesson yet, so she got a refresher course in Code compliance. 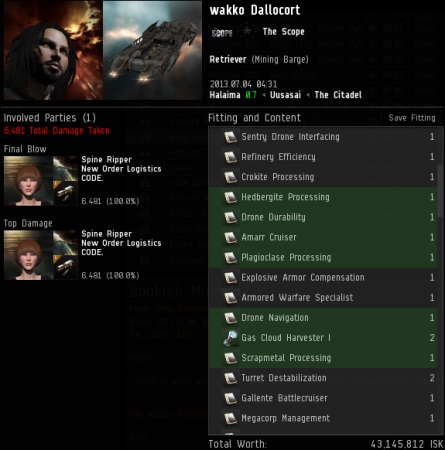 KILLMAIL
There's a myth floating around out there that I'm against people reading while they mine. This is incorrect. I'm all in favor of miners who read--they need to read local. If they read the wrong things, they'll end up like wakko Dallocort. This bookish miner was caught mining in a Retriever with more than eighty skillbooks in the cargo. He probably thought he was in a single-player game and could spend all his days reading. Anyone remember that Twilight Zone episode "Time Enough at Last"? This story ended pretty much the same way. Agent Spine Ripper killed the miner and closed the library for good. If only wakko had read the Code! 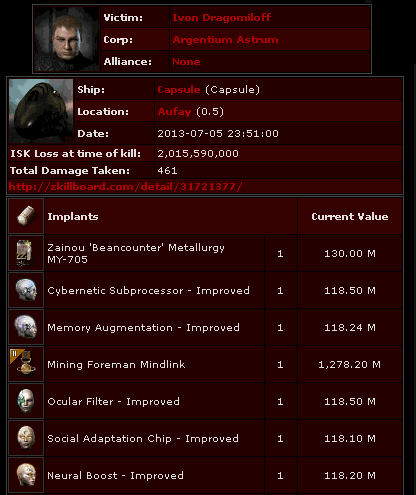 KILLMAIL
Expensive things can come in small packages. Ivon Dragomiloff, a suspected bot-aspirant, was AFK in a shuttle. Agent D400 caught him loitering near a stargate. D400 didn't need to notify him before he opened fire, because all highsec residents are deemed to have been made aware of the New Order and its Code. Inexplicably, Ivon didn't take any action to get into compliance, despite being legally deemed to be on notice. His shuttle was popped, and his pod--worth more than 2 billion isk--exploded. 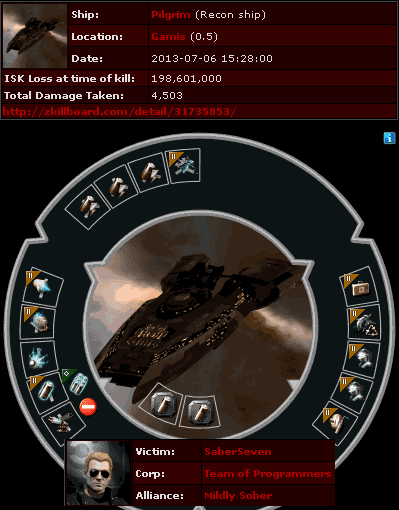 KILLMAIL
Agents of the New Order have traveled far and wide across our mighty empire. Even the Ammatar Mandate has been touched by the Order. SaberSeven became infuriated when he saw Agent Kalorned enforcing the Code by bumping some miners. SaberSeven brought his Pilgrim to attack, but he was swiftly destroyed by Kalorned and Agent CONCORD Police Captain. Kalorned provided the chat log:

Of all the suicide gank ships that have been used in vain, SaberSeven's tech II fitted Pilgrim has got to be one of the finest. SaberSeven was astonished by its failure. His parting remark referring to Concord, "they ECM now", is a bit like exclaiming "guns fire bullets now?" Let this serve as a lesson to all. Concord uses ECM, guns fire bullets, and Agents of the New Order always, always win.
Posted by MinerBumping at 20:24