Previously, on MinerBumping... Aliosis II adamantly refused to obey the Code, and his mining alts suffered dearly for it. Aliosis attempted to retaliate by having another alt declare war against me. To my surprise, Aliosis was a member of the Black Legion. alliance, a bastion of elite PvP in nullsec. The stage was set for an apocalyptic battle for the honour of highsec. 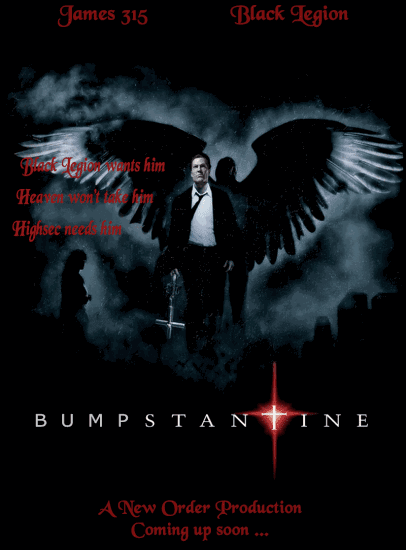 (Credit to Varvara M for the poster. Click here for the full-size version.)

On the eve of the titanic struggle, both sides were absolutely confident of victory. Only one of them could be right. Guess which one? 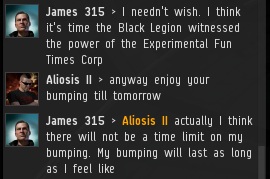 Black Legion surprises its enemies by unexpectedly dropping capital ships at the critical moment. But the Experimental Fun Times Corp had a few aces up its own sleeve. 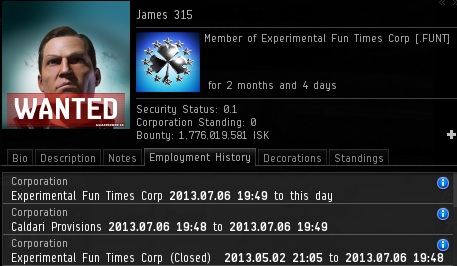 The supreme art of war is to subdue the enemy without fighting.
-- Sun Tzu

By closing and immediately re-opening the exact same corporation, EFTC dissolved the wardec, thereby inflicting 50 million isk upon the aggressor. It's a move that would make a judo master jealous. This was the tenth time EFTC won a war in this manner--a total of half a billion isk in enemy assets destroyed. A marvelous war record considering I haven't had to fire a shot. 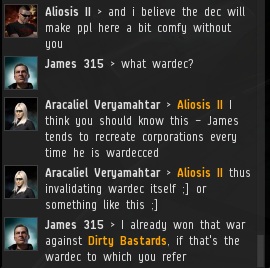 Since Aliosis was no longer logged onto the alt that he used for the wardec (or not paying attention to the alt's window) he was apparently unaware that he had already lost the war. 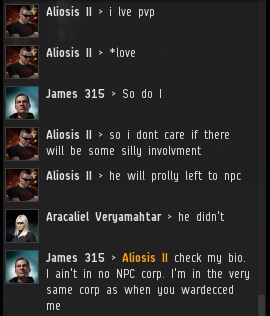 Aliosis worried that I would spend the rest of my days in an NPC corp, for fear of his wrath. I assured him that this was not the case. 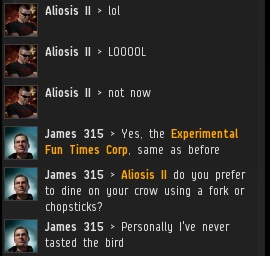 My profile confirmed that I remained the founder and CEO of the Experimental Fun Times Corp--responsibilities from which I had no intention of resigning. 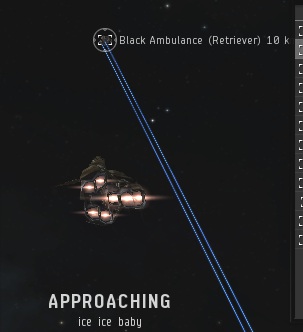 I resumed bumping operations, including bumps against Aliosis' own alts, the very miners he sought to protect with his ill-fated war. 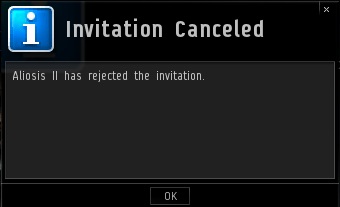 As someone who has spent a lot of time in the role of a conquering hero, I am resolved always to be magnanimous in victory. I hoped to engage Aliosis in a private convo so we could closely review his mistakes and prevent them from being repeated. But he gave me the silent treatment. 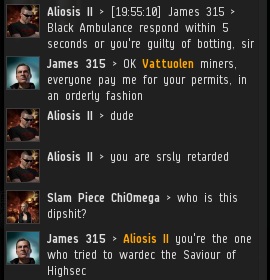 I assumed Aliosis must have finally realized what had become of his wardec, and that he was sulking. 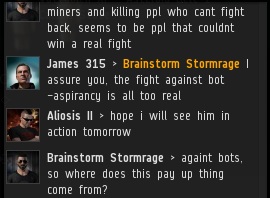 ...No, not yet. After all this time, he was still looking forward to a war that was long since won by the New Order. His poor manners weren't prompted by his defeat at all--it was just his normal behavior! In that case, how would he react when he did hear the news?

To be continued...
Posted by MinerBumping at 20:11