Helpful Advice from the Carebears

You know, we've had a lot of fun with the carebears over the last year. Bumping them, exploding them, harvesting their tears... All of these are good things. But is it possible that the carebears have something more to offer us? Do the carebears actually possess a wisdom that we've failed to take full advantage of? I recently received an EVEmail from a carebear spokesman who suggested that very thing. 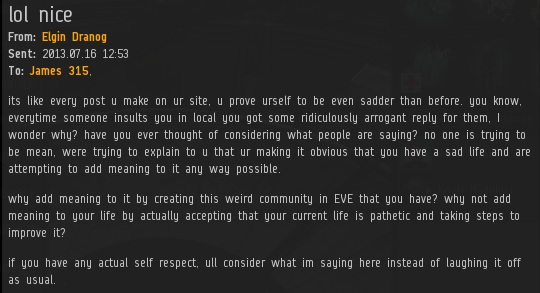 Elgin Dranog articulated a fascinating perspective that I hadn't yet explored. Maybe I was wrong to add meaning to my life by "creating this weird community". If I just stopped for a minute and really listened to the carebears, I could find avenues for self-improvement. 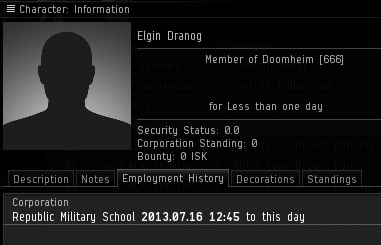 I looked Elgin up and discovered that he was a day-old alt creating solely for the purpose of sending me that EVEmail anonymously. But I couldn't shake the feeling that maybe the carebears were trying to help me with some constructive advice all along. There's only one way to know for sure, so let's find out!

At first glance, Taly Zora appeared like every other incomprehensible, foaming-at-the-mouth angry carebear. But in light of Elgin's EVEmail, I noticed that she wanted me to "listen" to her. Was she attempting to communicate? I needed to study more EVEmails from more carebears.

Nitr Sabezan spared a few words about my blessed mother, may she rest in peace. There didn't seem to be as much value in the EVEmail as Elgin would have me believe. Then again, not every painting is going to be the Mona Lisa.

Countess Ambrosia was angry about being bumped, and made dreadful accusations about my motives. But she did say "be well". Perhaps she had my best interests at heart after all.

The next EVEmail claimed I "clearly" wanted cash without doing any work. Not so "clear"; it takes a lot of work to keep the world spinning. Having read several EVEmails, I was disappointed by the lack of hidden wisdom. I decided I would need to expand my search and draw upon EVEmails sent to my fellow Agents.

Once again, I detected glimmers of what Elgin was talking about: Infuriated by the loss of his ship, Devestation Tauriskus demanded that Agent Guybertini "do something constructive" in his life. However, the advice offered in the EVEmail simply reinforced the impression that many carebears have an oral fixation. Onward!

Iam Salty offered a warning. As usual, it didn't amount to anything, since nobody's corp tried to attack me.

More oral references and mother references. If the carebears were trying to communicate, it was in a very primitive form. There was just enough consistency to hint at a shared culture for the carebears--possibly even a dialect.

The second bioreactor kendons EVEmail urged Guybertini to "talk to me straight up". Was this a request for the Agent to respond in the same dialect?

Although I embarked on this study in the hopes of finding ways to improve my own life, the more carebear tears I read, the more I found myself concerned about the state of their lives. It was painfully evident that they didn't have the advantage of healthy, nuturing environments. Regardless of whether genetics played a role, the carebears simply didn't have the skills necessary to adapt to and function within a modern society. Experiencing failure after failure, they gave up and fell victim to an AFK lifestyle that further atrophied what few resources they did have at their disposal.

All of this made me reflect on my own privileges. We of the New Order have so much going for us. This power implies a responsibility, doesn't it? I urge my fellow true EVE players to take up the burden of the Code, go forth into the wilds of highsec, and bring the blessings of civilization to these sullen, angry carebears! They may not show you any gratitude, but at least you'll have the satisfaction of knowing that you left them better than you found them.
Posted by MinerBumping at 20:12