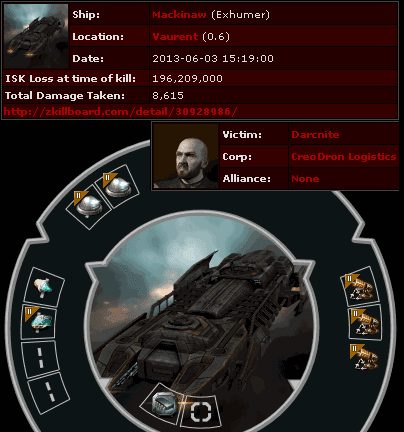 Out on patrol, Agent Runeme Shilter spotted a Mackinaw piloted by Darcnite of the CreoDron Logistics corporation. Darcnite was passive-aggressively bullying highsec by mining ice without a permit. Others might look away in horror, but Runeme stared down the menace, unafraid. 'Twas another classic 1v1 duel of gank Catalyst versus exhumer. 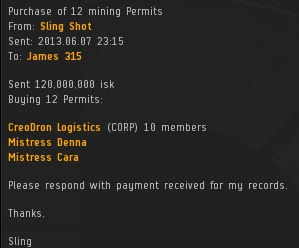 Actions have consequences. Sling Shot, acting as the corp's chief liaison, learned about the Code after his corpmate told him of Runeme's heroism. Impressed, Sling came directly to me and purchased 12 mining permits. Victory! Sometimes a miner will send money to the Agent who takes action against him, while other times a miner will send money to the next Agent who visits, or to another Agent entirely. This is why Agents are never discouraged when a miner initially refuses to pay: We believe in paying it forward.

A few hours later, I received a complaint from Sling. He encountered some noble Agents of the New Order who had taken action against his corp for their violations of the Code.

One of the most common attacks made by our skeptics is the idea that we simply extort money from bots, who are then supposedly allowed to continue botting without interference. Not true. Every miner must pay, but he must also continue to follow the Code. A driver's license doesn't allow you to run people over, after all.

I'm always eager to help people who buy mining permits, so I gave Sling some good advice. But then he hinted that his motives in sending me all of that mining permit money might have been less than pure.

Still, I accommodate people from all walks of life. Some EVE players feel uncomfortable swearing allegiance to me. That's cool. If they prefer, they can "affirm" their loyalty to me instead.

I considered the matter settled, but Sling Shot started to weasel around a little bit. I was not encouraged. I began to suspect that he might be a bot-aspirant in permit-holder's clothing. To this day I have yet to hear a good excuse for why someone wouldn't want to pledge loyalty to me. Such refusals only make it easier to betray me later.

When one shoe falls, the other is never far behind--that's gravity for you. Sling Shot confessed that he did not even believe in the Code. *facepalm*

Out of nowhere, Sling Shot asked whether the purpose of the New Order was to encourage CCP to end suicide ganking. I couldn't have been more disappointed. Sling Shot seemed like a pretty smart guy when he was buying mining permits, but his EVEmail demonstrated how little he knew about the game. He didn't understand that (1) CCP already knows about the suicide ganking mechanic, (2) Code violators are not "minding their own business", (3) all mining activity in highsec is the New Order's "business", and (4) gankers suffer the consequences of losing their ship, insurance rights, and security status.

Ever since I announced the creation of the New Order, the word "bully" has been thrown around like a cheap hacky sack. Whether this is due to the incident with The Mittani or because people don't know the meaning of the word "bully", I don't know. In this case, it must have been the latter: Someone who enjoys helping people is a bully? Regardless, the authority of the Code was upheld. Sending money to Agents of the New Order is nice--and necessary--but complying with the Code in thought and deed is even better.
Posted by MinerBumping at 18:12