One thing I've noticed since the New Order-inspired removal of infinite ice: Ice miners are much more antsy when they get bumped. I suppose mining a limited resource isn't as relaxing as mining never-ending ice AFK. 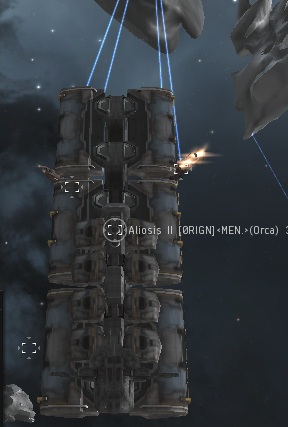 While strolling through an ice anomaly, I came across an Orca pilot named Aliosis II. He was accompanied by a handful of miners, none of whom owned permits to mine in my territory. 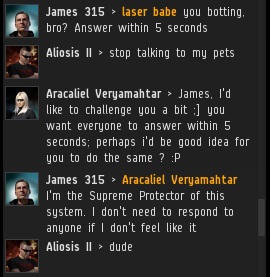 I did a routine bot check on one of the miners. Aliosis spoke up. I'll be honest, I don't like it when Orca pilots speak on behalf of their miners, even if they're all alts.

I prefer to do my job in a leisurely manner. I set my own pace; it's one of the benefits of being my own boss. But Aliosis began to exhibit signs of that antsiness I mentioned earlier. 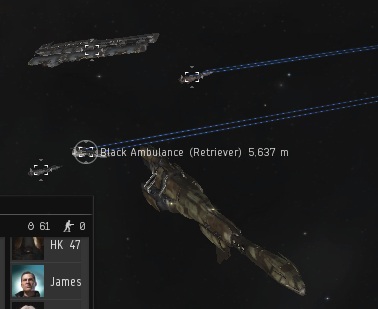 After removing one of his alts from mining range, I resumed my interview with him. Like a negotiation, it's best to do these things from a position of strength. 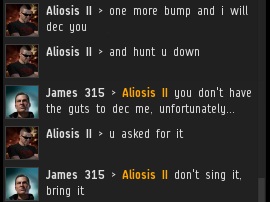 Barely a minute after first contact, Aliosis's saber was rattling like an old engine. I yawned, expecting another idle threat.

To my great surprise, he spent the 50 million isk needed to make good on his threats. The impudence! 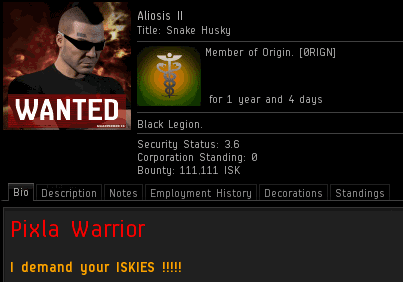 I noticed something strange, however: Aliosis wasn't even a member of the corp that wardecced me. 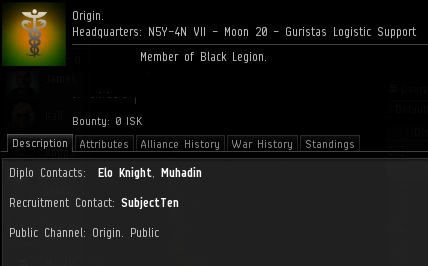 My investigation revealed that Aliosis II was a member of Black Legion. alliance. Led by Elo Knight, Black Legion is a powerful nullsec entity known for its elite PvP. Early in the CFC's war against TEST, BL proved such a nuisance that CFC was compelled to buy them off. Now the Goons pay BL to fight TEST. So what were they doing in a highsec ice anomaly? 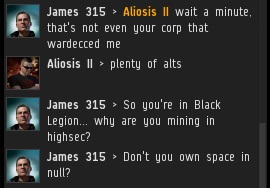 I demanded an explanation. We've all been told by the carebears that it's safer to mine in nullsec than highsec. If that's true, then a BL miner had no business here. Was BL planning an invasion of New Order space?

Aliosis continued to behave suspiciously. He insisted that it made perfect sense for a member of a nullsec alliance to mine ice in highsec. 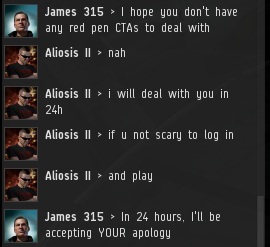 For once, a miner actually did have "powerful friends in nullsec". He expressed total confidence in his ability to destroy my Invincible Stabber. Was this only the first wave of a vast invasion force? Were the New Order's days numbered?