The Rumble in Vattuolen, Part 2

Previously, on MinerBumping... I ventured to Vattuolen to commence bumping operations. Illegal miner caveywavey became infuriated, wishing death on me in real life. I resolved to win him over to the Code. 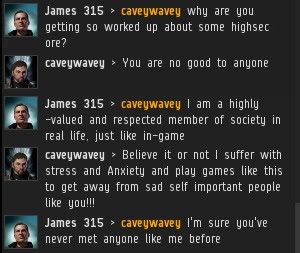 On this occasion, caveywavey would need to deal with me. He repeatedly called me "self-important". He couldn't be more wrong. I am important not because of myself, but because of the power I was entrusted with by everyone else in highsec. I am humbled by the support of the highsec community and the awesome responsibility they gave me. 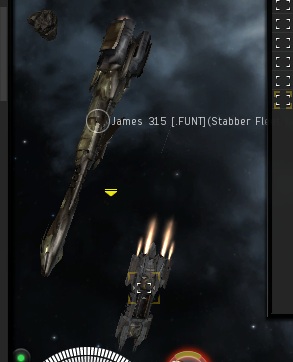 It's a common misconception--as old as bumping--that as long as I'm bumping one person, I can't bump anyone else. Because miners rely on being in mining range for very long, continuous periods of time, it's quite easy to "juggle" miners. I spotted an illegal Retriever in the asteroid belt and changed course to intercept. 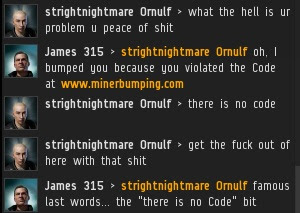 Every time you bump a miner, it's like opening a new present on Christmas morning. You never know whether it will be a cool gift like a signed portrait of myself, or a less-cool gift like a pair of socks. But if a miner starts yellowboxing you when you bump him, that's a sign that his reaction won't be positive. I still hoped that strightnightmare Ornulf would immediately pay me, but this time I didn't roll the hard six. 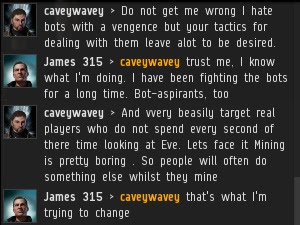 As I bumped the Retriever, caveywavey slowly chugged back toward the ore. He was calming down a bit, and we seemed to be making some progress. 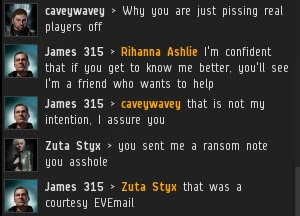 Though carebears are a superstitious and cowardly lot, they become emboldened when in groups. Miners started coming out of the woodwork to complain about bumps from earlier in the day. 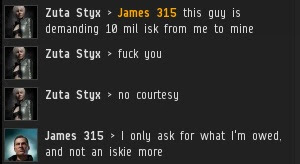 Zuta Styx had finally checked his EVEmail and discovered why he missed out on some mining cycles. If a miner fails to respond in local, I assume they're AFK, and I send them a lovingly copy-pasta'ed form letter. The letters are all unique; the name of the recipient changes. 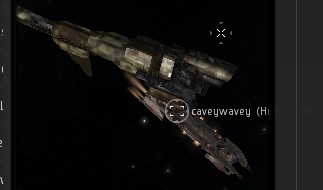 caveywavey foolishly lectured the Saviour of Highsec on how to save highsec. Pow! Right in the kisser for his troubles.

This unexpectedly raised caveywavey's stress level again, so I broached the subject of his 10 million isk debt in the most cautious and diplomatic manner possible. 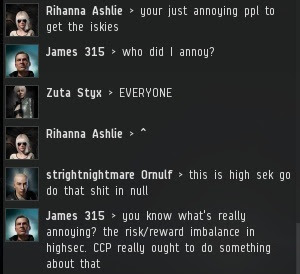 Once more, the mob revolted. They criticized me, so I made sure to bring the topic back to where it belonged. Once CCP fixes the risk/reward imbalance in highsec, then we can discuss less-important matters, such as my alleged imperfections. 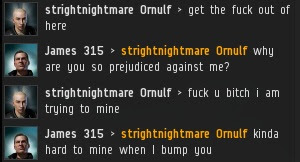 With the deftness and grace that one expects from an Invincible Stabber, I effortlessly swooped back and knocked strightnightmare out of range again. 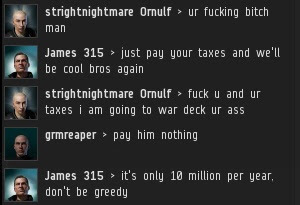 He started to lose his cool. Local chat was about to go sour; I have an instinct about these things now. 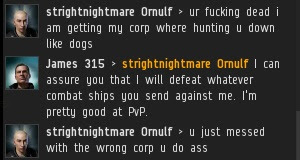 And there it was. strightnightmare Ornulf threatened to bring his powerful friends into the system and kill me. Blood was about to flow in the asteroid belts of Vattuolen.

To be continued...
Posted by MinerBumping at 22:24