Accountability Begins with a Permit

MinerBumping is the most trustworthy news source in highsec. As a CCP employee once said of SOMER Blink, it's "100% trustful".

I received a sensitive intel report from Agent Inquisitor Eden, a self-described "10-hour hero". Only now has this report been declassified for the general public. Could it be a story of a New Order defeat--the first in its history?

Inquisitor began applying to a bunch of highsec mining corps. His character was indeed just hours old. Inquisitor could only fly a Catalyst. Most mining corps saw little use for him. 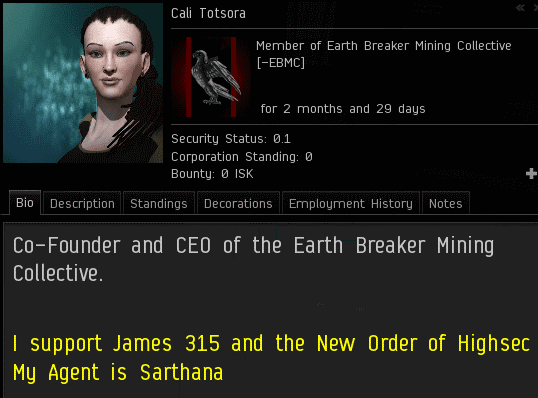 But Inquisitor was invited to join a corp run by Cali Totsora. Her bio made her seem like a pretty good miner. But Inquisitor, acting according to his nature, wanted to investigate for himself.

The Agent was startled to find an anti-Order sentiment present among the miners. Even Cali herself claimed that she only owned a mining permit to avoid getting ganked--not because she really believed in the Code. As the New Order grows in strength, we can expect even people who hate us to bend to our will, publicly. However, Inquisitor was on the inside, a member of the corp. He would discover the truth.

Inquisitor found a smoking gun: Cali went AFK in her Orca during a corp mining op. It was incredible: A permit-holding CEO was violating the Code and setting a terrible example for her corp. Inquisitor Eden knew he had to use his Catalyst to send a message. But would a flimsy meta-fitted destroyer be powerful enough to take down an Orca? 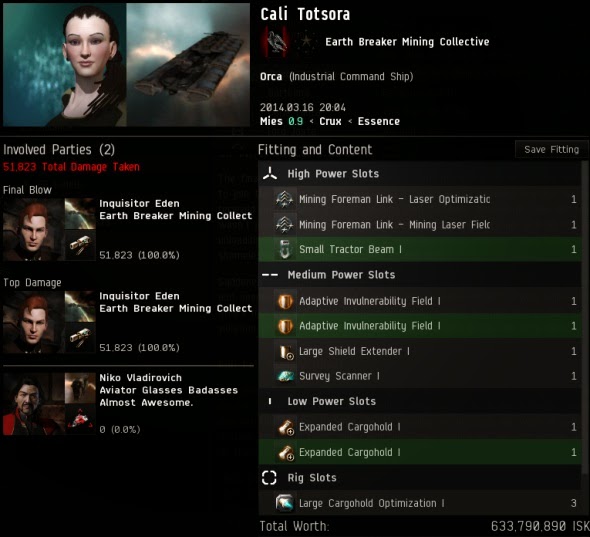 With total faith in the Code, Inquisitor opened fire. He had minimal equipment at his disposal, but he eventually chewed through every one of the Orca's hitpoints. Helpfully, the Orca was anti-tanked--yet more evidence of Cali's bot-aspirancy. 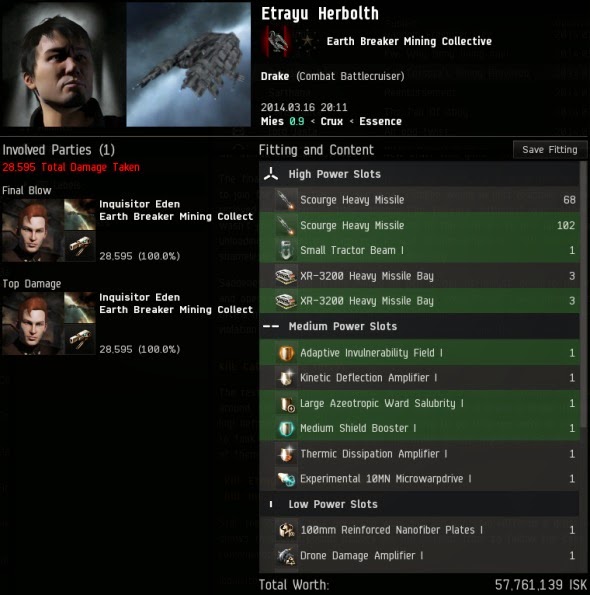 After the Orca was destroyed, the corp grew alarmed and sent a fleet of three cruisers and a battlecruiser to simultaneously attack the humble Catalyst. Inquisitor was fearless. He could have withdrawn from the field of battle with no shame, but he wanted the miners to know what true courage is. In an awesome display, Inquisitor actually managed to take down the fail-fit Drake before his own ship exploded. 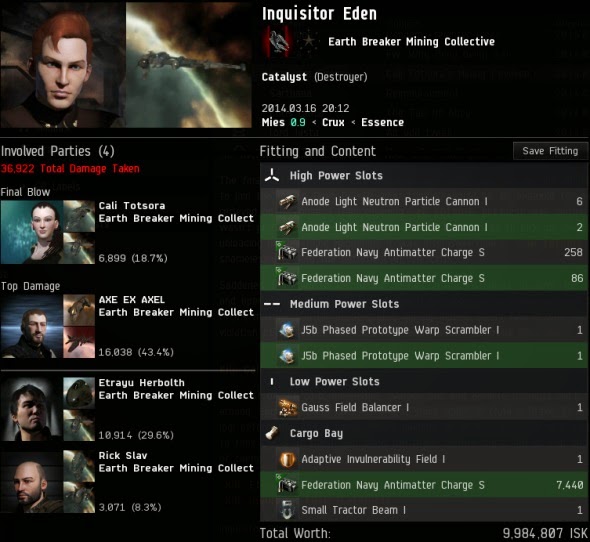 Math can't explain it. Only the power of the Code can. Also, Inquisitor was being remote-repped by a friend from the Belligerent Undesirables community. But still, his ship had barely any hitpoints to remote-rep in the first place.

It was an extraordinary, unmitigated victory for the New Order and the Code. And it was further evidence that a Code-compliant miner's journey doesn't end with the purchase of a mining permit. A permit is only the beginning. We aren't extortionists who are only interested in getting some money, a slice of the Code-violator's pie. We want to rebuild the miners from top to bottom. If you own a permit and think it's a license to grind isk AFK, just remember: The New Order is watching you, too.
Posted by MinerBumping at 19:33