Everyone knows the New Order is home to a great many elite PvP'ers. If you were to greet a random highsec miner and ask him or her, "How about that New Order, eh? They do a lot of elite PvP?", you would probably get no reaction. That miner is AFK. However, if you were to continue asking the same question to multiple random highsec miners and found one that was not AFK, you would probably get a response in the form of Russian profanity.

However, if you were to continue asking "How about that New Order, eh? They do a lot of elite PvP?", you would eventually run into a highsec miner who answers your question honestly. He or she would reply with some variation of, "Oh, yes. Very much so."

It's common knowledge that Code enforcers are elite PvP'ers. But just how elite are they? It's difficult to get a reliable subjective take on this, because the EVE community is built upon a foundation of bluff and bluster. A carebear grinding away in a 0.7 system claims to be an alt of an important person; a miner who spends all his time sucking away at ice anomalies in highsec claims he's "not a miner". Powerless gank victims vow to destroy the New Order "eventually", or they claim to have a fleet of Phoenixes or Tornadoes en route to the system, that they have 100 spare Orcas, etc., etc.

So let's talk numbers instead. If we put aside the subjective measurements in favor of objective ones, we find unequivocally that the New Order is ridiculously elite. 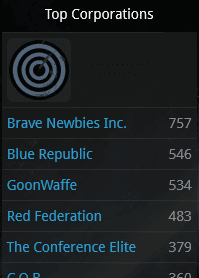 Just the other day, a CODE. corp, The Conference Elite, was listed by zKillboard as the fifth-killingest corporation in EVE. They have fewer than 60 members; most who out-kill them have many thousands of members. But corporations have long been eclipsed by alliances. Let's look at some alliance stats. 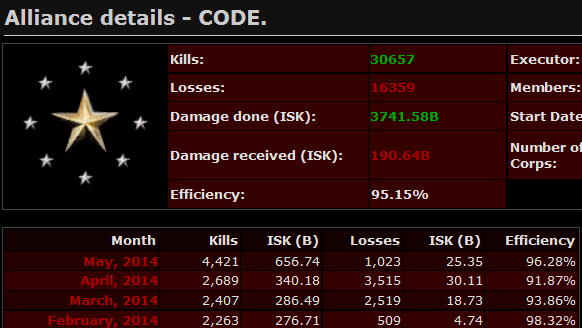 CODE. (or the punctuation-friendly "CODEdot"), an alliance with a large fraction of the New Order's Agents, inflicted over 650 billion isk in the month of May. That's a lot of dead bot-aspirants. The New Order is long past the days when people said we didn't exist, or that we were all the alts of one person, or that we didn't matter. We're even past the point where people can ignore us. We simply inflict too much damage. It would be like nullsec dwellers saying, "Stop giving The Mittani so much attention and he'll go away."

Let's put that 650 billion into context, by looking at the stats of some nullsec alliances you might've heard of. CODEdot inflicted slightly more damage than Brave Collective, the Brave Newbies' alliance, which has 9,500 members. TEST Alliance Please Ignore, which a year ago was the largest sovereignty-holding alliance in nullsec, also did less damage than CODEdot.

By larger margins, CODEdot out-killed the big sov-holders you might be familiar with from the nullsec influence map: Alliances like The Initiative., RAZOR Alliance, Fatal Ascension, Against ALL Authorities, and Curatores Veritatis Alliance. CODEdot inflicted nearly the same amount of damage as aspiring elite PvP powerhouse Black Legion.. Looking at the lowly renters, CODEdot inflicted more damage than Brothers of Tangra and Northern Associates. combined, which claim sov over roughly half of nullsec. CODEdot even managed to inflict almost half as much damage as the most powerful alliance of all, GoonSwarm Federation.

Of course, those numbers are very misleading. Because killboards give alliances in coalitions full credit for all of each other's kill-assists, the nullsec alliances' stats are vastly inflated. Accounting for this, CODEdot inflicted far more damage. Smaller, more independent entities such as Rote Kapelle and Dirt Nap Squad.--which are your prototypical self-described nullsec elite PvP'ers--were out-killed by CODEdot by a factor of 8 and 13, respectively. Some of CODEdot's individual pilots inflicted more damage in solo kills alone than those entire "elite PvP" alliances.

What's the point of all this? Just some food for thought. If you're planning on mining in an untanked Retriever, take some time to consider what you're up against. Do the math. Then come to your senses and obey the Code.
Posted by MinerBumping at 19:05