There are so many different ways to advance the Code in highsec. Diversity is our strength. 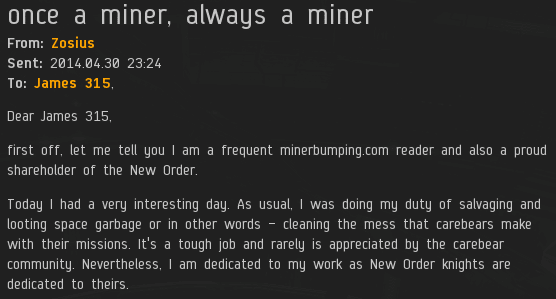 Agent Zosius is a mission efficiency specialist. It's a dirty job. Like most dirty jobs, it's an underappreciated one.

Zosius came across a Dominix Navy Issue piloted by Dauthani Cesaille running a mission in a 0.9 system. Like a lot of bot-aspirant missioners, he was incredibly lax about his wrecks. He did not loot and salvage them with the promptness that one would expect in a massively multiplayer online game. He set his own pace, as though he were in a single-player galaxy that belonged only to him. The economy--in the person of Zosius--resolved this inefficiency by looting and salvaging the wrecks before the missioner could get to them. 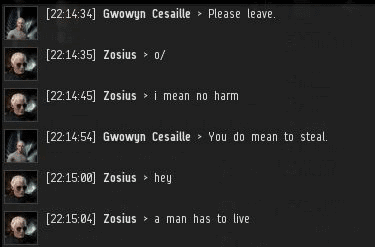 Without warning, the situation got serious. Gwowyn had a faction battleship at his disposal. Our hero was piloting an Enyo, a humble assault frigate. Gwowyn threatened to destroy him. Since Zosius had been looting his wrecks, Zosius was attackable without CONCORD interference. Despite being threatened by the faction battleship, Zosius remained calm and confident. You see, Zosius had a little secret. He had an ace up his sleeve. He had the Code.

Gwowyn made good on his threat. He opened fire on the Agent's assault frigate. A few minutes passed, and Zosius still wasn't dead. In fact, he was fine. His small ship could quickly zip around the Dominix Navy Issue in tight little orbits. The battleship's big guns couldn't track him. And apparently the carebear wasn't making effective use of his drones. 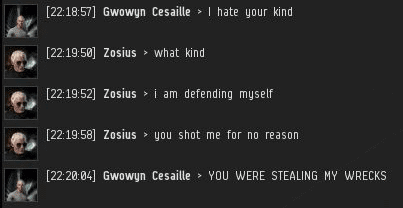 The battle continued, with Gwowyn unable to kill Zosius, but also unable to leave. Zosius kept the mighty faction Dominix tackled. The two had a frank discussion about who started the fight. It was then that Gwowyn revealed his deep-seated prejudices against highsec content creators. But if you've read MinerBumping carefully, and if you have a pretty good memory, you might already know that about Gwowyn Cesaille. Remember this...? 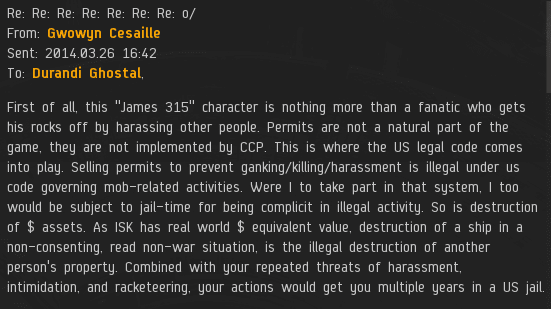 Yes, Gwowyn Cesaille was the carebear who honestly believed you could get "multiple years" in an American prison for engaging in non-consensual highsec PvP. He even claimed that he could be put in jail for buying a mining permit. 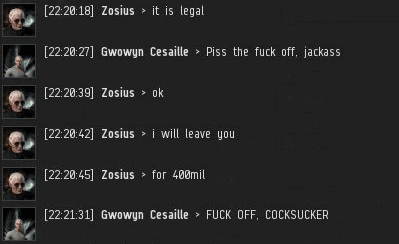 Our Agent's skillful piloting of the Enyo and his total faith in the Code turned things around completely. Instead of being stomped by the Dominix Navy Issue, Zosius achieved command of the situation. Now he set the terms. He was willing to let Gwowyn off with a warning, but he needed 400 million isk in reparations for Gwowyn's insults.

The great thing about New Order Agents is that they don't let power go to their heads. A lot of people would be tempted to take brutal vengeance upon Gwowyn. Yet Zosius remained courteous, professional, and incredibly reasonable.

A few minutes earlier, Gwowyn wanted to tell Zosius how to do his job, and then he wanted to smash the Agent's Enyo like a bug. Now that he was at a disadvantage, suddenly Gwowyn only wanted to be left alone. In a multiplayer game with hundreds of thousands of players.

Zosius had no desire to destroy Gwowyn's ship. He only wanted to set things right. However, Zosius had his work cut out for him: He was dealing with someone who wanted to lock people up in real life for shooting his Mackinaw--someone who hated "his kind". If this encounter was going to end without bloodshed, Zosius and Gwowyn would need to find common ground.