Previously, on MinerBumping... Highsec mission runner Mrk9331 became enraged and wished rape upon Agent Malcolm Shinhwa, who looted his wrecks and disrupted the mission rats' aggro. Rather than attack Malcolm's Incursus with his Myrmidon, Mrk9331 accused him of stealing his money, time, and life. 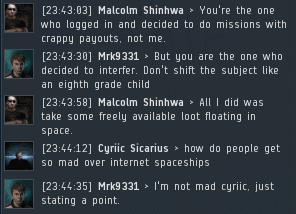 Malcolm sagely pointed out that an EVE player with six years in the game might be wasting his own time by choosing a career of level 2 missions. When others in local starting chiming in, Mrk9331 insisted he wasn't really mad. 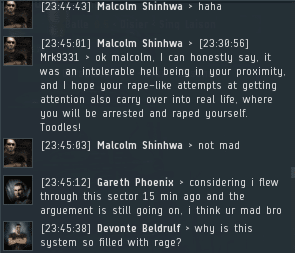 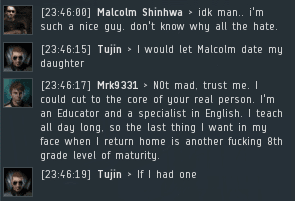 To prove he wasn't mad at Malcolm, Mrk9331 brought out the big guns. He dramatically revealed that he was an Educator and an English specialist. If Mrk9331 were truly angry, he could use his powers to cut to the core of Malcolm's "real person". So far, Mrk9331 had refrained, and Malcolm's real person remained unscathed. So far. 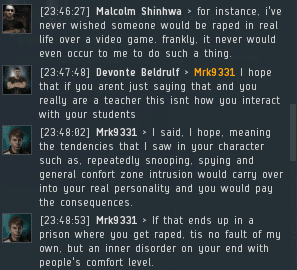 Mrk9331 elaborated on his earlier remark about wanting Malcolm to be raped. He explained that he was merely observing that Malcolm might himself be a rapist in real life. This he deduced from the fact that Malcolm had looted some wrecks.

Mrk9331 forgot about one thing, though. In highsec, it's the Agents of the New Order who do the educating. Carebears are the ones who need to learn. 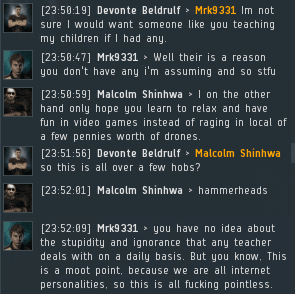 Locals were amazed to hear that Mrk9331's rage was based on the loss of a few Hammerhead drones. What would Mrk9331 do if he lost a Retriever? 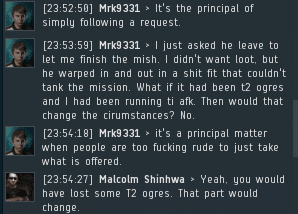 Despite his anger--and despite the fact that Malcolm's looting of wrecks made him freely attackable--Mrk9331 didn't open fire on Malcolm's frigate. He yellow-boxed it with his Myrmidon, but that was all. He knew it was silly to get so worked up about a few medium drones. It was the principle of the thing. Carebears put principle above all else. 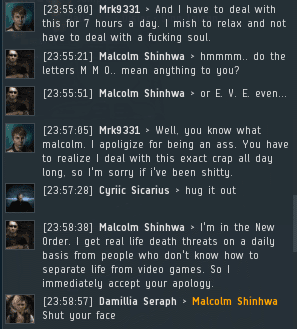 The Miner Bingo quotes continued to dribble out. Mrk9331 just wanted to "relax" and to be left alone in the most crowded area of the most populated single-shard MMO in the world. 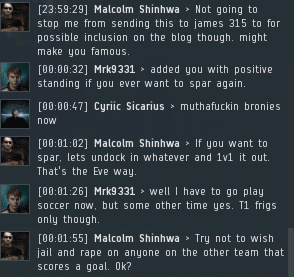 At length, Mrk9331 began to calm down. The reconciliation between Agent and bot-aspirant was cut short when the Educator had to go play soccer. (At least that wasn't an excuse for being AFK.) 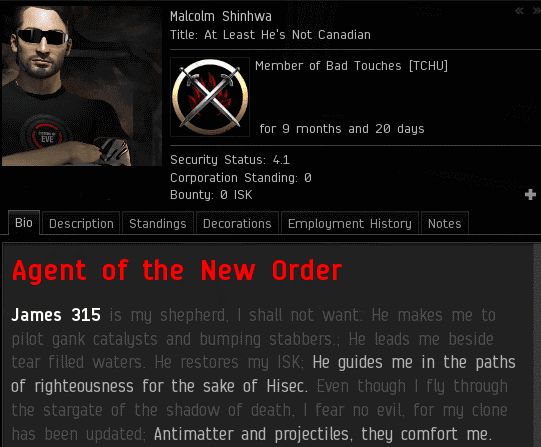 And so it was that an English specialist discovered that even he still had things to learn. For the first time, Mrk9331 experienced EVE. An Agent of the New Order showed him that highsec hadn't forgotten him. When given an apology, Malcolm freely gave forgiveness in return. Now that's a mensch.
Posted by MinerBumping at 19:45