Previously, on MinerBumping... Illegal miner Will55jr1, a member of Dark Star Militia Reserves, displayed a horrendous attitude toward the Code in Nakugard local. Agent DJentropy Ovaert reported him to the corp's CEO. When that didn't have a satisfactory result, he referred the matter to senior Agents. The threat of a wardec from Agent Cannibal Kane made Will reconsider his stance on the Code.

(Due to varying screen resolutions, you'll need to click on some images to read the chat.)

After Will bought mining permits for his fellow corp members, it came to light that Will purchased them under false pretenses: His corp was on the Red Pen list and owed 30 million per permit instead of the customary 10 million.

When told that he owed an additional 20 million per permit, Will balked. But hey, you're not supposed to want to be on the Red Pen list.

Will objected that when he originally handed over his money, no one told him about his corp's Red Pen status. Our Agents are ushering in a new era, facilitating the rebirth of highsec. That doesn't mean they were born yesterday. 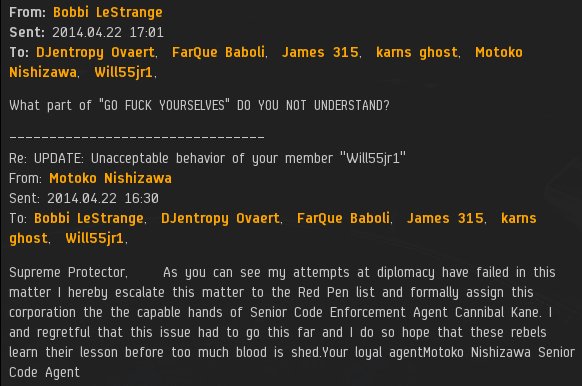 The record plainly showed that when senior Agent Motoko Nishizawa notified me of the corp's Red Pen status, the corp CEO (Bobbi LeStrange) was copied on the EVEmail. Will himself also received a copy.

Will threatened to tell everyone in highsec that mining permits are a scam. Then, when faced with the evidence, he was unable to come up with an excuse.

Motoko generously offered to credit Will with a 1/3 downpayment, based on the isk he had received from him thus far. Unfortunately, the carebear seemed willing to throw away all the progress he'd made. Which is crazy. That's like playing a really long RPG and never saving your game.

Will suffered a dramatic relapse. He declared the Code a scam and even went as far as to suggest that I wasn't his personal inspiration anymore.

The next day, after having slept on it, Will started to come back around. It didn't hurt that the threat of a wardec from Cannibal Kane made his CEO increasingly nervous. Will was apparently told to clean up the mess he'd made.

Indeed, the corp was already on the wrong end of a wardec from someone else. Perhaps Will's CEO blamed him for calling undue attention to the corp.

It was a remarkable turnaround. Will was now willing to pay Red Pen prices for all his corpmates' mining permits. 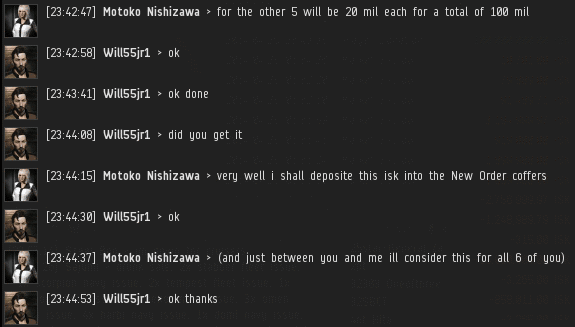 Will sent Motoko the money. His docility and willingness to comply with the Code were an inspiration. It was hard to believe that Will was the same person who used to spend his days cursing the New Order in local and encouraging Nakugard miners to rebel. Despite the fact that he provided payment for his fellow miners, Dark Star Militia Reserves ultimately decided to remove Will from the corp. Will's bio doesn't contain a pledge of loyalty to me, so his Code-compliance is apparently still a work in progress. Even so, Will had come a long way. It's not easy for someone to insult you one day and give you a bunch of money the next. Yet we know this is the journey that all rebel carebears must make. A thrilling prospect!
Posted by MinerBumping at 20:26