Previously, on MinerBumping... After losing his Orca and most of his in-game possessions, TDD Dominaters sought to prevent the wardec against his corp by asking a New Order Agent what he wanted. Agent Malcolm Shinhwa, a member of the corp running the impending wardec, told TDD to stop abusing newbies with his bad leadership. TDD refused. With negotiations at an end, TDD returned to his corp, which was still inhabited by the New Order awox alt, Milo Taranga.

TDD threatened to send his well-trained army of new EVE players against Milo--the same army that refused to even try to rescue TDD's Orca when ordered.

TDD and Milo continued to argue about each other's respective combat skills. The rest of the corp could only watch as their CEO remained helpless.

TDD's corp wasn't even at war yet, but it was paralyzed by a single Moa. TDD even took a break from bragging about how great a war leader he was.

The new EVE players shrugged their shoulders at the entire situation. They didn't seem to think it was possible to begin EVE in a good corporation. New players are condemned to serve time in corps like TDD's.

TDD believed himself to be persecuted for his brilliance. The New Order was only targeting him because otherwise he might one day grow up to challenge their power. TDD, the Saviour of Highsec you ain't.

Milo tried to warn TDD that as an awox alt, he was privy to all the corp's secrets, including the planned secret refuge. TDD wouldn't listen, so Milo arranged a practical demonstration: 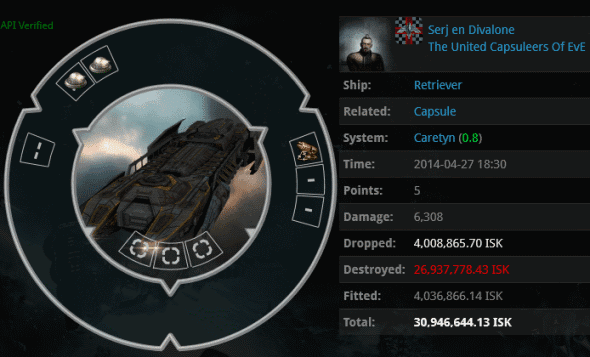 Serj en Divalone was the first to die for TDD (unless you count TDD himself). It was Milo's parting message to the corp, to show them TDD couldn't be trusted to keep them safe. After downtime, Milo was removed from the corp. The awoxer was gone, but in a matter of hours, the wardec would begin.

TDD finally put the other part of his plan into motion. All the way back in Part 2, TDD mentioned that he would have an ally in the war. The ally in question was the Sovereign Infinity alliance. Sovereign Infinity is a group of highsec mercenaries who base out of Algogille, the same system TDD sent his corp members. Sovereign Infinity's first act was to send Malcolm Shinhwa a message: 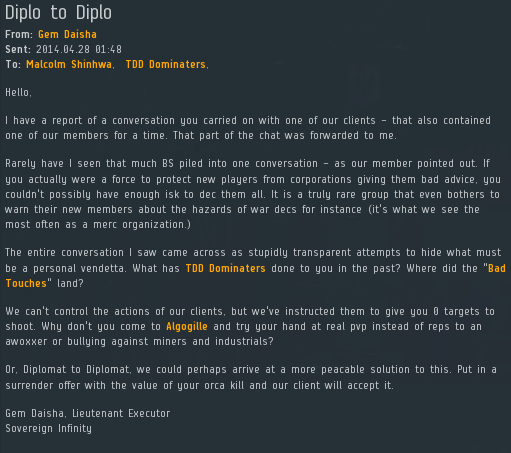 Gem Daisha, the "Lieutenant Executor" of the alliance, engaged in diplomacy by repeatedly insulting Malcolm and accusing him of being a bully. She proposed that the war be ended by having Malcolm pay TDD back for the value of TDD's dead Orca. Oh, and she also invited Malcolm to Algogille, TDD's secret refuge. Unimpressed, Malcolm told Gem that he wanted TDD to stop abusing new players. Gem replied: 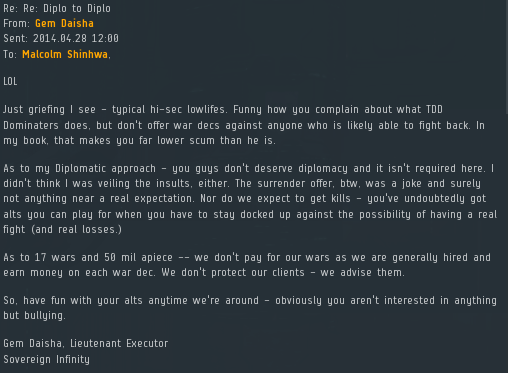 Gem explained Sovereign Infinity's philosophy: "We don't protect our clients, we advise them." The part about not protecting them was certainly true, given that she'd just disclosed the secret location where TDD was telling his corp members they could safely mine and run missions during a wardec. So far, Sovereign Infinity wasn't exactly earning its paycheck. 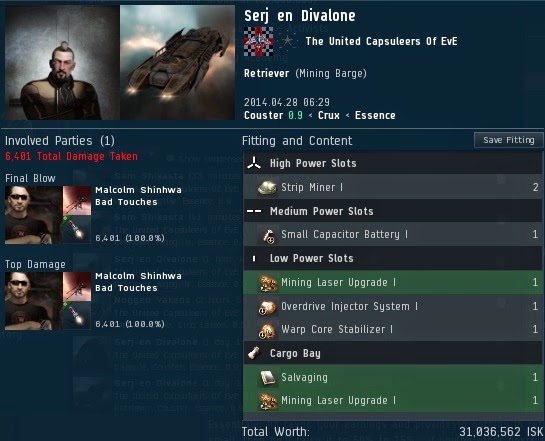 It was a stalemate. The New Order demanded TDD stop mistreating newbies and violating the Code. TDD refused to change his ways. TDD's corp members wouldn't leave the corp. Sovereign Infinity "advised" its client. The only way out of the deadlock was violence. And so the war of liberation began.