Sometimes you need to find just the right word when describing someone or summing up his character. Take the word "mensch", for example. According to Wikipedia, mensch means "a person of integrity and honor" or "a stand-up guy". 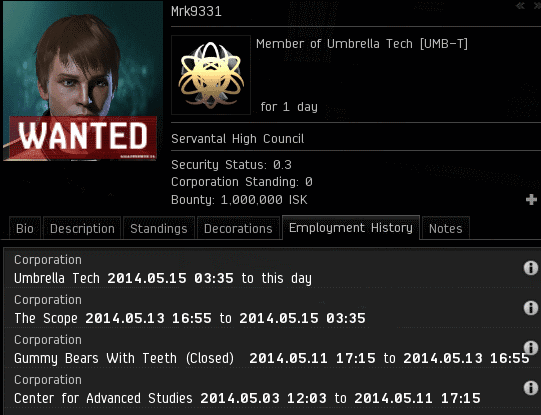 Meet Mrk9331. He spends his days running level 2 missions in highsec in a Myrmidon. 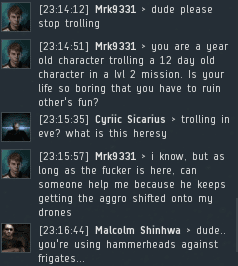 Agent Malcolm Shinhwa was minding his own business, flying an Incursus-class frigate and taking loot from the wrecks of Mrk9331's mission rats. 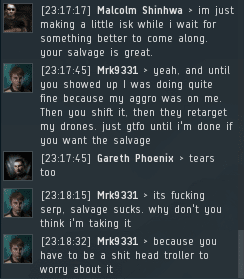 Mrk9331 intended to breeze through the mission by keeping all of the mission rats' aggro on his Myrmidon, which could easily tank their attacks. His objective was to keep the aggro away from his drones, which could be destroyed by the rats. But Malcolm's activities caused the aggro to shift. Malcolm repeatedly warped in and out of the mission. Whenever Malcolm drew aggro and left the mission space, the aggro would switch to one of Mrk9331's drones.

Malcolm provided Mrk9331 with emergent content. He brought human interaction into Mrk9331's solitary, bot-aspirant gameplay. Mrk9331 was ungrateful. In less than half an hour, Mrk9331 joined the elite club of carebears who have openly wished real-life rape on other EVE players. Sadly, that club is growing less elite by the day. 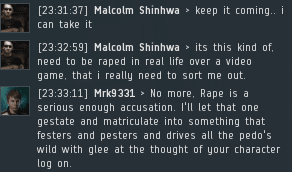 Malcolm, like all Agents, was stoic. He remained courteous and professional. Everyone in local could see the contrast between the New Order and the rebels. 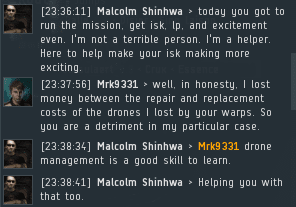 Almost miraculously, Malcolm was even willing to give the foul carebear some pointers on playing EVE correctly. After all, Mrk9331 was, as he said, just a "12 day old character".

...And this is why you never trust a carebear who claims to be a new player. Mrk9331 confessed that he actually started playing EVE six years ago. He's still in highsec and running level 2 missions. Bot-aspirancy had a stranglehold on the poor fellow. 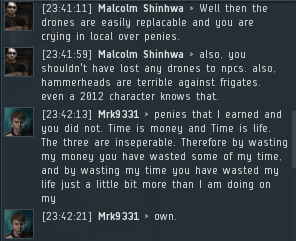 Mrk9331 got philosophical. He proposed a new unified theory of carebearism. By cycling the mission rats' aggro, Malcolm was stealing Mrk9331's life-force. This is why Mrk9331 felt it was justified to wish rape upon him. All in all, the relationship between the two EVE players had grown a bit sour. Mrk9331 hated Malcolm. Would Mrk9331 finally use his Myrmidon to destroy Malcolm's fragile Incursus? Or did fate have something else in store for the Code violator?

To be continued...
Posted by MinerBumping at 20:27