Previously, on MinerBumping... Agent Zosius was helping himself to some wrecks in a carebear's mission. The carebear's main convo'ed him and misleadingly proclaimed ownership of all the wrecks. Zosius' Enyo was then attacked by the Dominix Navy Issue, which was unable to track him. Zosius offered to let the carebear go in exchange for a modest ransom.

Gwowyn Cesaille had some interesting ideas about who started the fight. But the logs supported Zosius' version of events. Zosius only uses violence in self-defense. The carebear sealed his own fate. 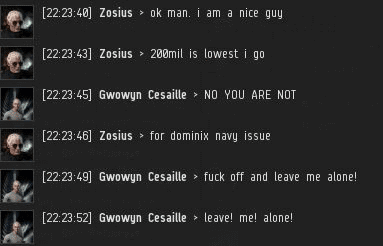 With his combat options exhausted, Gwowyn demanded that Zosius leave him alone. If successful, this strategy could revolutionize PvP engagements throughout EVE: Pick a fight, and if you start to lose, tell the other side to leave you alone. Just imagine the applications for nullsec warfare!

Despite Gwowyn's relentless violations of the Code, and despite the Dominix Navy Issue's value of approximately 600 million isk, Zosius was willing to let the ship go for less. Now it was time for Gwowyn to put aside his profanity and pick up a calculator so he could make a rational decision.

Gwowyn still wasn't sure if his saying "leave me alone" in the convo window (a convo he started, incidentally) would act as a verbal warp core stabilizer. Perhaps he felt Zosius' use of a warp disruptor constituted "extraordinary real-life harassment"?

Everyone who has ever ransomed a carebear knows that carebears love to lie about the extent of their in-game assets. The pilot of a Dominix Navy Issue claimed he didn't have 200 million isk. At the same time, he claimed he was trying to sustain his account with a steady diet of PLEX, which cost somewhere around 700 million isk each. 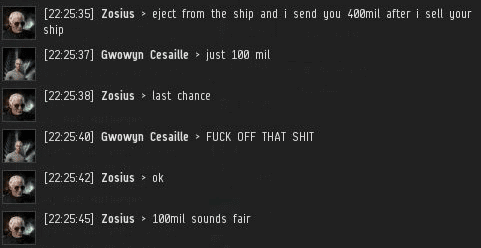 At last, Gwowyn admitted to having 100 million isk. According to the lying carebear, this was the total amount of isk he possessed. Not 150 million, not 101 million, but 100 million exactly. Even if this were true, it meant he was guilty of flying a ship he couldn't afford to lose. 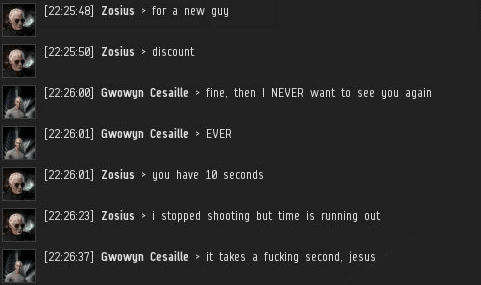 Another thing ransomers are familiar with is the way carebears delay in transferring isk. As someone who routinely gives other people money, I can say with total authority that it only takes a few seconds to make a transfer. Gwowyn was stalling, even though he'd already agreed to hand over 100 million isk.

After nearly a minute, Gwowyn finally made the transfer of "all he had", 100 million isk. Now Agent Zosius had to make a decision: Would he destroy the ship anyway? 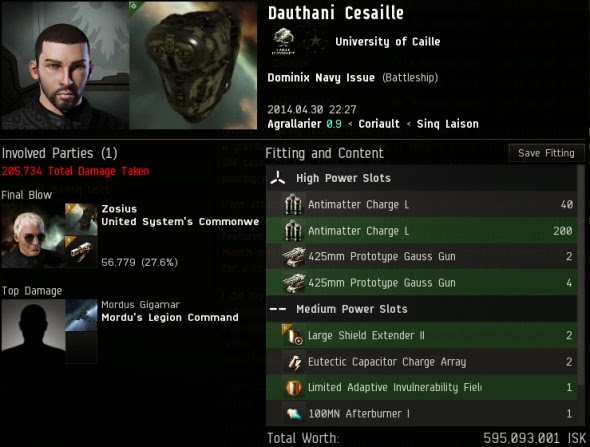 ...He would. This, too, is something that people who ransom carebears will find familiar. Zosius finished off the Dominix Navy Issue which, unsurprisingly, was fail-fit. Not a moment's consideration had gone into how the ship might fare in PvP.

Zosius was bitterly disappointed by the carebear's behavior. The lies, the entitlement, the impolite language, the violence... All things considered, Gwowyn got off easy. Zosius had barely any hope that Gwowyn would even offer a "gf".

Gwowyn threatened to quit, violated the EULA, and abruptly terminated the convo. In other words, he behaved exactly the way you would expect a carebear to act without the guidance of the Code. Highsec is still home to many players like Gwowyn Cesaille. They say they just want to be left alone. For years, they have been left alone--and look where it got them. It's about time these people learned they have friends in highsec.
Posted by MinerBumping at 19:34