Previously, on MinerBumping... Diplomacy failed. Agents of the New Order from Bad Touches had no choice but to go to war against TDD Dominaters' corp full of new players. Confident of the safety of their Algogille refuge--despite having been awoxed and warned by said awoxer that he knew their plans--they began losing their ships.

TDD was the target. The New Order only wished to free the new players. But just as Morpheus explained to Neo, if you want to free people's minds, first you need to kill a lot of innocent people. Nevertheless, mercy prevailed. Agent Malcolm Shinhwa warned as many of the newbies as he could. Whenever he encountered them, he sent them this EVEmail: 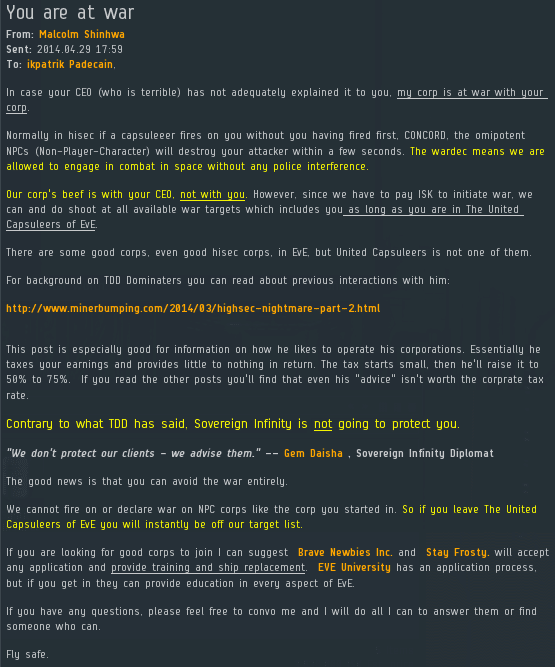 Malcolm hoped to provide TDD's corp members with a reliable source of information and an alternative to languishing under TDD's tyranny. 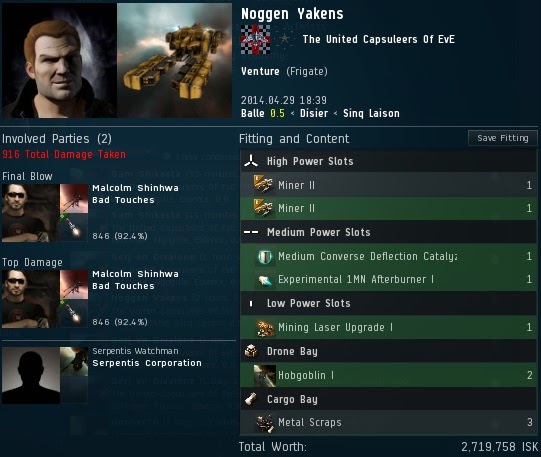 When they refused to take his advice, Malcolm killed them, even the newbies in their Ventures. Meanwhile, though Agent Jer'ith Bodas' awox alt was gone, a spy remained in TDD's corp, so we may continue to gain insight as to what these carebears were thinking.

TDD filled his corp chat with lies and propaganda. He was fully aware that the war could break the corp and chase his future taxpayers away.

Despite the active wardec, most of TDD's corp was only interested in continuing to mine. TDD gave them conflicting advice. He said there wouldn't be any mining fleets until the war was over, but he assured them they would be safe.

Despite their losses, TDD repeatedly encouraged his corp members to continue generating revenue for the corp. Apparently he believed his highsec mercenary allies, Sovereign Infinity, would protect him in Algogille.

But Sovereign Infinity never appeared. As their representative said, it wasn't their job to protect their clients, only to give them advice. Their advice was to provide the New Order with "zero targets". Effectively, this would have shut down their corporation for the duration of the war. TDD dismissed this suicidal advice, offering suicidal advice of his own. 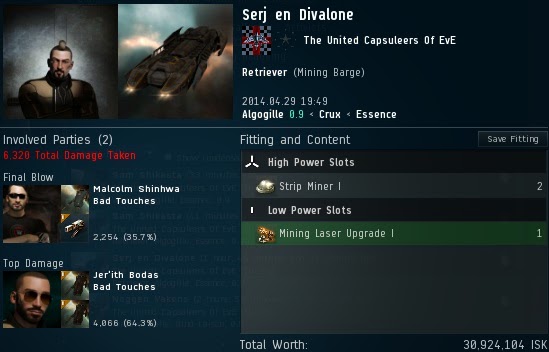 
Sam Shikasta > the bad guys are gone from the system ?
Arsin Blake > shall we do som mining? make with the money?

The mining and mission running continued at TDD's command. 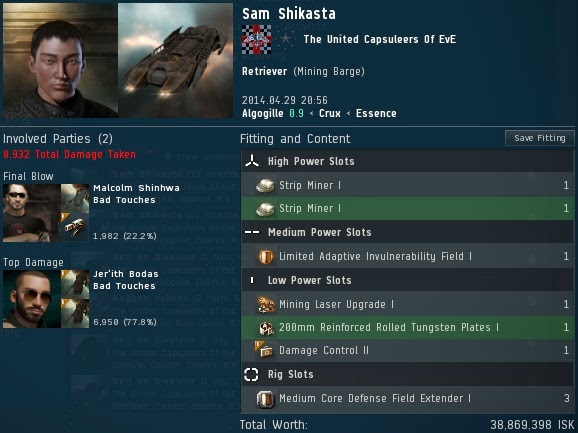 Barely an hour later, another dead Retriever in Algogille. But the corp had no guidance from TDD other than to keep trying to make money in the "safety" of Algogille. 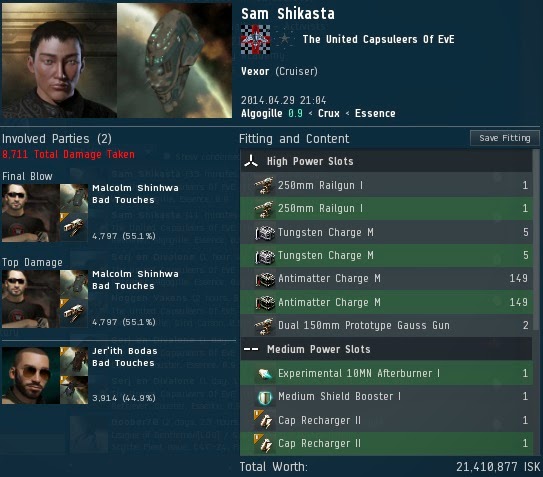 In frustration, one corp member tried to engage in PvP and defend the system. Sovereign Infinity wasn't going to do it, so he figured he would. As all other enemies of the New Order have learned, going to battle against us means certain destruction.

Throughout the war, Malcolm contacted the newbies and gave them the advice and instruction TDD wouldn't.

The war was an act of generosity. Without New Order intervention, those players would still be in TDD's corp today.

Still, TDD refused to surrender. The wardec was extended again and again, for three weeks. By the end of it, over 170 million isk (not counting TDD's lost Orca) was destroyed. That's not much isk for most people. But considering it was inflicted upon a corp full of new players in Retrievers and Ventures, it meant a lot to them.

At last, TDD gave up. He sent an EVEmail to his corp members and kicked them all out of the corp. It was the first sensible thing he'd done in ages. 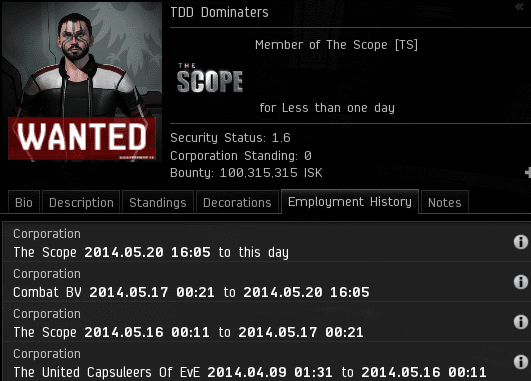 Then TDD left the corp, too. He was given a spot in the main corp of the invisible highsec mercenary alliance, Sovereign Infinity. He washed out in three days, failing to meet even their low standards. Yet TDD continues to play EVE and join corps. His future is uncertain, but it does not appear bright.

In the end, it was a glorious victory for the New Order. Most of the former members of TDD's corp remain in NPC corps. But Arsin Blake took Malcolm's advice and joined Brave Newbies Inc., where he stands a chance at playing EVE the way it was meant to be played. That fully justifies all the war and destruction. The truth is that highsec is filled with CEOs just like TDD Dominaters. They have no ability to lead. They brag endlessly about their own heroism and skill to corp members who don't know any better. When conflict arises, these CEOs tell their members to stay docked up forever, or to mine and run missions during the wardec. Such corps are a cancer upon highsec and EVE. Everyone benefits from their destruction, especially the members who are free to find a proper corp, once the one they're in is forced to shut down. Our noble crusade continues.
Posted by MinerBumping at 19:32