"It is an ill thing to spit upon highsec."

The quotation above, taken from me a few moments ago, feels appropriate for this post. Many have rejected its ancient wisdom, resorting instead to the bot-aspirancy and decadence of today's rebel carebears. What happens to those who spit upon highsec? Let's find out. Here are some examples from the week of May 18th @ 00:00 EVEtime through May 24th @ 23:59 EVEtime. 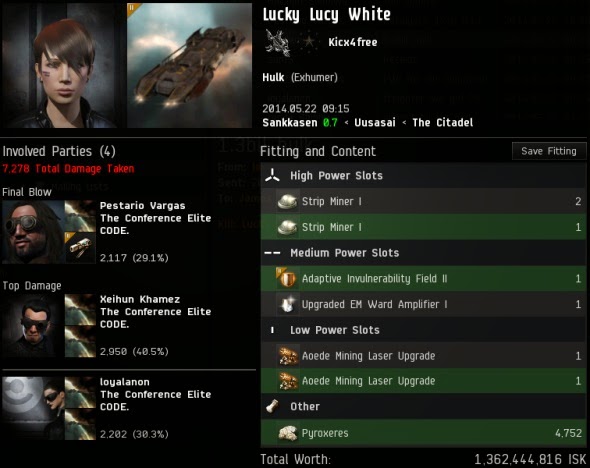 Lucky Lucy White pressed her luck a bit too far when she chose to fly a Hulk in highsec. Oh, and then she loaded it up with a bunch of goodies, costing her a total of 1.3 billion isk when Agents Xeihun Khamez, loyalanon, and Pestario Vargas did the inevitable. CCP, keep carebears like these in mind when you pat yourself on the back for your Procurer buffs. 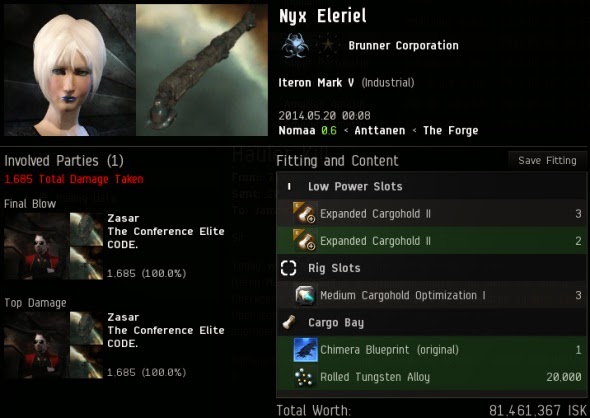 Once upon a time, Nyx Eleriel fantasized about joining a nullsec alliance and flying a Nyx. At some point, however, she realized how much easier it would be to become a bot-aspirant highsec dweller. She fit out an Iteron V with no less than eight anti-tank modules and used it to transport a Chimera BPO, valued by zKillboard at 1.1 billion isk. Agent Zasar saw this, felt bad for her for a split second, and then served justice. 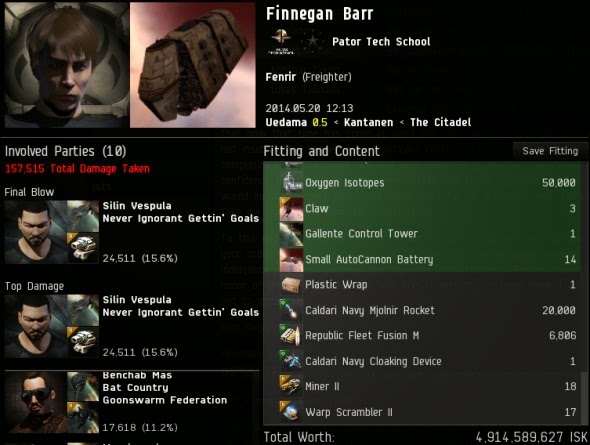 This week we have a wonderful lesson for you from Agent Amyclas Amatin and her friends in Bat Country. After she assisted them in destroying freighters, Amyclas contacted each freighter pilot and notified them about their Code violations. First came Finnegan Barr, who lost a freighter worth 4.9 billion isk. He was carrying 18 Miner IIs in an attempt to supply illegal miners. He replied to Amyclas as follows: 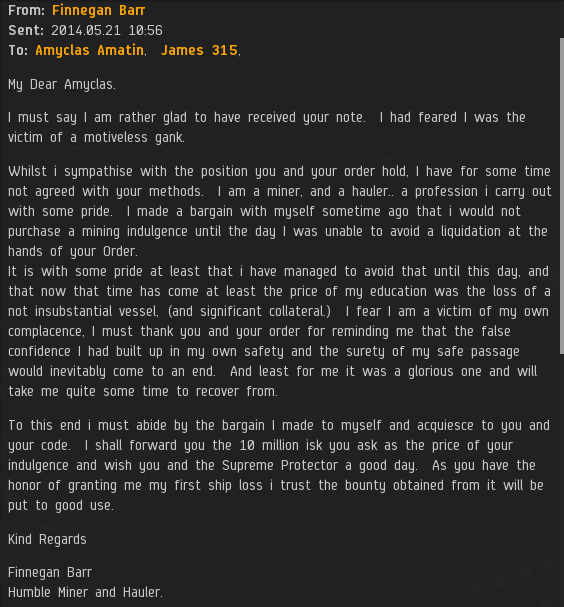 Finnegan, like everyone else in highsec, knew about the New Order. He hadn't yet purchased a permit. After losing nearly 5 billion isk, he learned his lesson and got right with the Code. 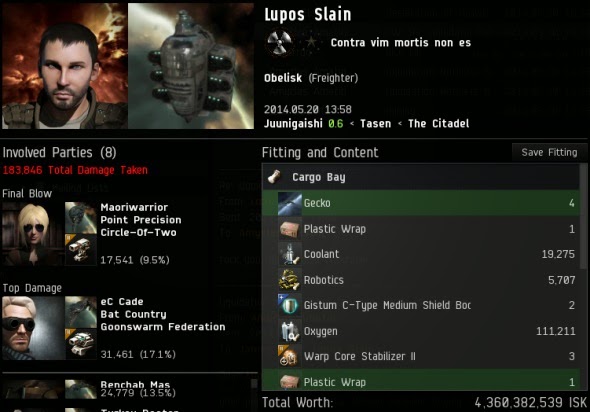 Then came Lupos Slain, whose 4.3 billion isk freighter was slain by Agent Amyclas Amatin and the aforementioned friends from Bat Country. Did he learn his lesson, too? Or did he go the Goofus route?

Looks like the Goofus route to me. Maybe the loss didn't matter to him because he has a hangar with 100 spare Obelisks and 100 identical sets of cargo? 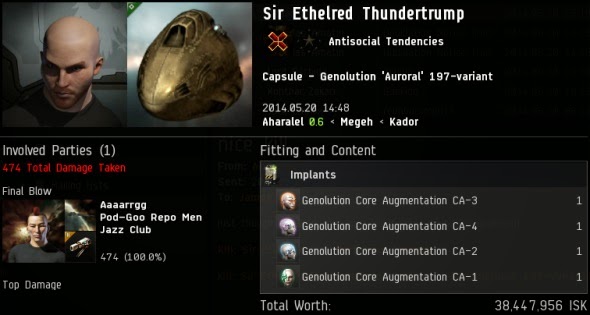 Sir Ethelred Thundertrump was penalized for violating the Code by Agent Aaaarrgg. The Genolution set is valued by zKillboard at 3.7 billion isk, making this one of the most expensive pods lost in recent weeks. But you know highsec. If you think a carebear is behaving badly, there's always an even more foolish carebear right behind him. 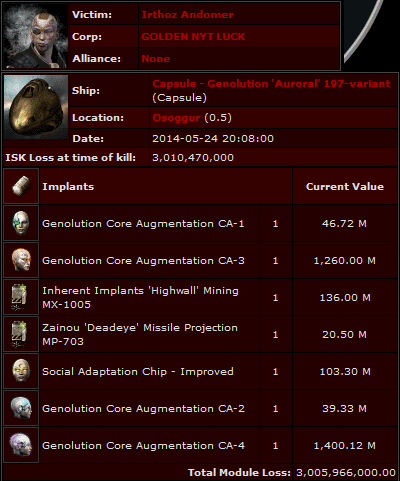 Irthoz Andomer was podded for illegal mining by Agent Ima Wreckyou. This pod, also containing a set of Genolution implants, is valued by zKillboard at 4.1 billion isk. It's fair to say Irthoz was spitting tacks after this loss. So when he saw Agent Alyth Nerun enter the system and begin bumping miners, Irthoz went over the edge. 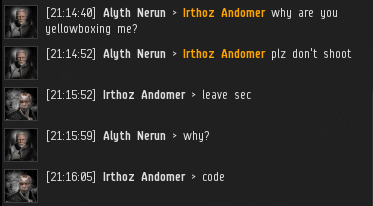 Irthoz grabbed a Typhoon-class battleship and locked up Alyth's Stabber Fleet Issue. Irthoz demanded Alyth leave the system immediately, solely because Alyth is a member of the CODE. alliance. Alyth had done nothing to the miner. It was pure discrimination. 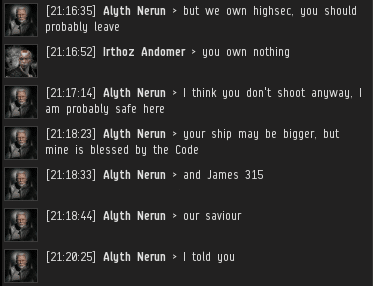 We all know how this story ends. It can only end one way for people like Irthoz. 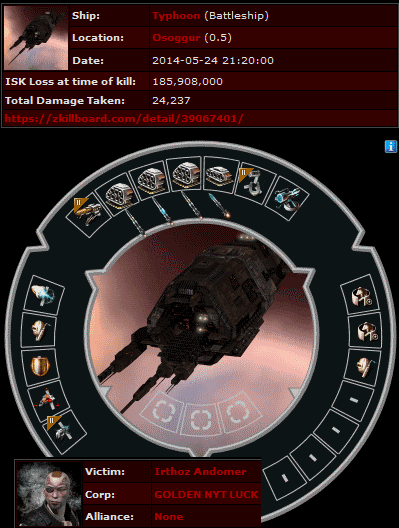 Irthoz Andomer opened fire and was promptly killed by Agents Alyth Nerun and CONCORD Police Commander. Thanks to all of the safeties and warning pop-ups provided by CCP, Irthoz must have known he would be CONCORDed for attacking an innocent Stabber. This makes his choice of fitting all the more bizarre. I must say, not too many suicide gank ships have a mining laser and a tractor beam equipped. But this one did.

Alyth's bumping ship survived. It was protected by the Code. Irthoz's Typhoon was not. Nor were the rest of the billions of isk worth of carebear ships destroyed this week. What does that tell you?
Posted by MinerBumping at 21:21