Venturing for a Venture, Part 1 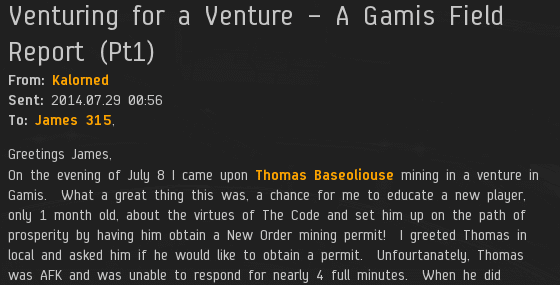 Case in point, Agent Kalorned's deft handling of an unruly Venture pilot in the Gamis system. The events of this field report occurred before the Venture-ganking contest was conceived.

Our hero noticed an unlicensed Venture pilot named Thomas Baseoliouse. Yes, Thomas was a new-ish player. At a month old, however, he'd had plenty of time to finish the tutorial and make his way out to lowsec. He voluntarily chose to remain in highsec, where he understood he would be subject to New Order law. 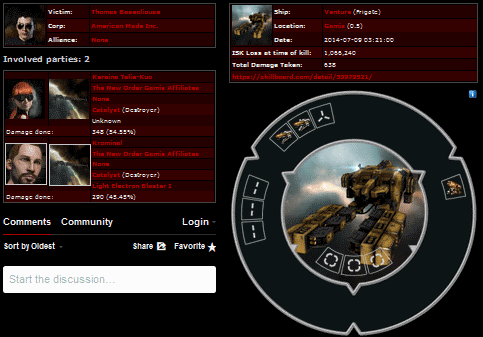 ...So Thomas was ganked.

Thomas wasn't happy about being ganked. If he cared about his ship so much, perhaps he should've warped away during the four-minute warning period instead of remaining AFK? 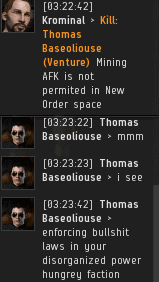 It's possible that Thomas was at his keyboard when the gank took place. If so, he wasn't giving his keyboard his full attention. Otherwise he could've warped out. Instead of blaming himself for the many mistakes that had led him to this point, he questioned the legitimacy of the Code. Protip: If you've messed up in your past, don't compound the error by ruining your future. 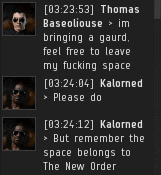 A child remains in the womb for several weeks before all its features become fully recognizable. But a newbie carebear's bot-aspirancy and rebellion can be detected in much less time. Barely a month old, Thomas was already making unrealistic threats. He wouldn't bother bringing a guard. Like other members of "industrial" corps in highsec, he simply mined alone all day. 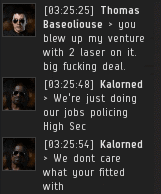 After shedding some tears, Thomas pulled a 180 and decided he didn't want that Venture anyway. He was stunned when Kalorned affirmed his only concern was the Code. This Agent was for real. How can you fight that?

The baby bot-aspirant tried to understand Kalorned's thinking. Since Thomas only cared about making isk, he tried to understand the New Order's Code through the prism of money. Yet his own earlier remark about the Venture being cheap seemed to undermine that. He was baffled.

Thomas repeatedly announced his intention to move to a highsec system not controlled by our Agents. Failing to grasp the magnitude of our power, he assumed moving a few jumps away would put some distance between himself and New Order territory! Before he could move away, though, he needed Kalorned to log off. Thomas didn't want to risk being podded on the way out. So he would play some other game on his second monitor. Isn't that what got him in trouble in the first place?

Thomas' attitude only got worse. He railed against EVE Online and its GMs for failing to run a proper theme park game like World of Warcraft. Kalorned gasped. Rehabilitating this bot-aspirant would take some serious de-programming.

To be continued...
Posted by MinerBumping at 17:57