When you ask a miner if they can speak English, you might want to be more specific.

...Because they may only know Miner English.

Riggy Lancer demanded reparations, or else he'd have someone bring down New Order Logistics or even the whole of CODEdot. Absurd. No one has someone who can do that.

...But not all miners believe I can save them from themselves. It's not unanimous yet, but we're getting closer. 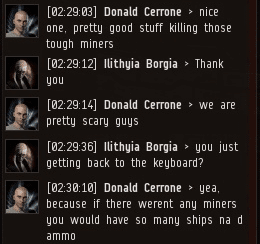 A suggestion to all the carebears out there: Don't try sarcastically praising our Agents. They're too used to receiving genuine, earned praise. Your sarcasm might get lost in the mix. 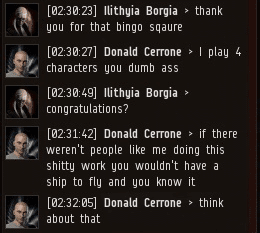 Some miners say that without miners, we wouldn't have any ships. They love to play the martyr, as if we benefit from other players doing boring work. But if they're so altruistic that they perform thankless drudgery in a video game, why do they suddenly become so selfish when we ask for 10 million isk? 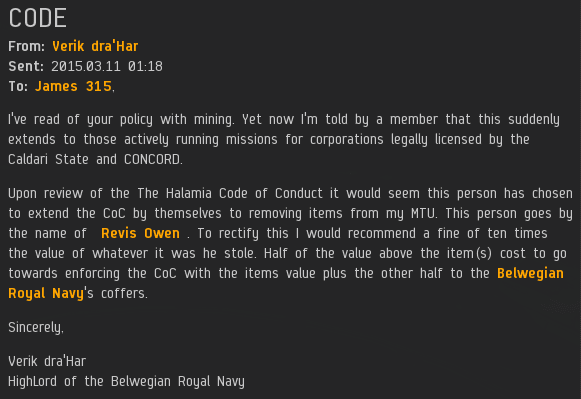 Unlicensed carebear Verik dra'Har reported that the contents of his MTU were confiscated by Agent Revis Owen. Verik recommended that Revis be fined 10 times the value of the goods. I rejected the advice. Instead, Revis gets a hi-five.

You know what grinds my gears? Gearbox Pedel refused to acknowledge the PvP prowess of our Agent, despite witnessing it first-hand. Fortunately, Myevil Gankalt was prepared to use logic to fix Gearbox's misconceptions about the game: 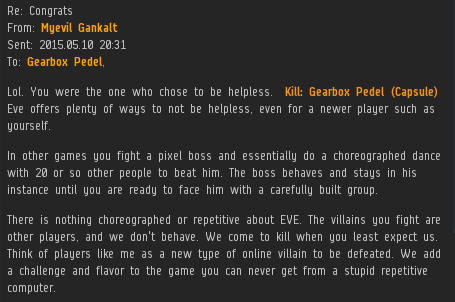 Gearbox attempted to build a retort of his own, but logic wasn't in his toolkit. 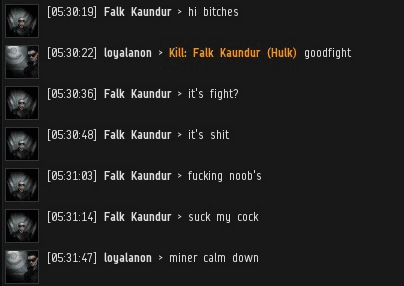 EVE legend loyalanon took some time out of his busy day to congratulate fellow PvP participant Falk Kaundur on a fight well fought. However, the miner wasn't yet calm enough to appreciate it. 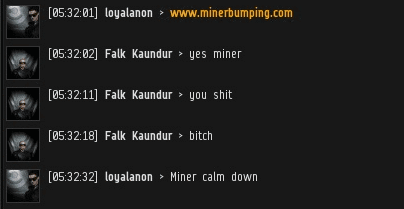 Falk really lucked out. loyalanon was willing to wait for the miner to calm down. It would be a tragedy if Falk missed out on an opportunity have an intelligent conversation with a highsec celebrity.

Alas, the stars were not aligned. Falk wasn't at his best that day.

Don't knock the New Order permit system 'til you try it. Pessimism kills.
Posted by MinerBumping at 20:08