No matter where in the world you live, complaining about the government is always a popular thing to do. Even highsec's government--the New Order--takes flak from the citizens it so diligently serves.

Everyone's a critic. And as you ponder Hitomi Nabalia's in-game house fires, I'd like to take this opportunity to welcome you to another edition of the Highsec Miner Grab Bag.

Presumably Koor Vokter is referring to an in-game concept of some sort. Is there a skill that takes six months to train?

I was alarmed when Kishu Tenderpaw reported that an Agent of the New Order hadn't followed proper protocol. Cue the investigation that exonerates the Agent in five seconds... 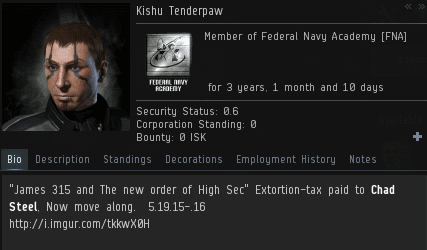 Yeah, that's was never gonna fly. Sometimes people ask me whether they can buy 10 million isk worth of New Order stock and have that simultaneously count as their 10 million isk mining permit fee. It doesn't work that way--you need to specifically buy a permit. An "extortion tax" would be a separate expense.

Meanwhile, in the Anti-Ganking channel, carebears complain that Agents are too quick to send in frivolous petitions. It really is Bizarro EVE in that place.

Trends come and go. In the past, carebears wished cancer on the family members of our Agents. Now there's a lot of fire-related stuff.

Remember, folks, Jake Lawson Vherokior went on this rant because he watched someone else's Retriever get ganked. Highsec miners can be a bit touchy, I've found.

What if, instead of threatening to cancel their EVE subscriptions, ganked miners cancelled their subscriptions to the games they really play? Then they could pay an appropriate level of attention to EVE. 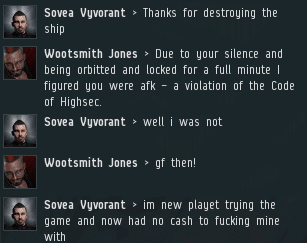 It was a tale as old as time: Sovea Vyvorant was a brand-new EVE player. Having been ganked by the mean ol' New Order, he was now completely out of cash. If you check his profile, you'll find that Sovea really was new. Have we, at long last, found a genuine newbie who was bankrupted by gankers? 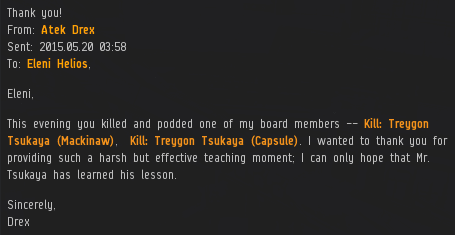 Now that's more like it. There are still some miners in highsec who care about their fellow corp members.
Posted by MinerBumping at 17:57