Over the years, people have compared Agents of the New Order to comic book superheroes. Some say that I am EVE's answer to the Batman. For instance, take Angus Adalwin's poster: 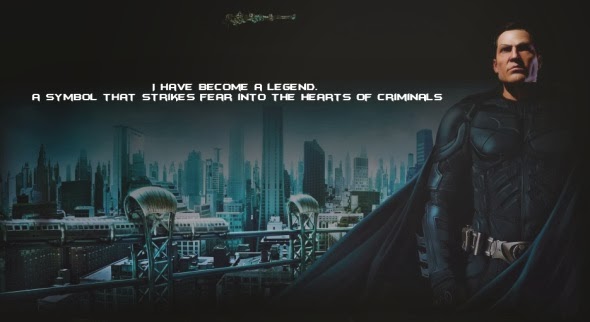 ...Or Alana Charen-Teng's poster, in which the heroes and villains of highsec couldn't be spelled out any more plainly: 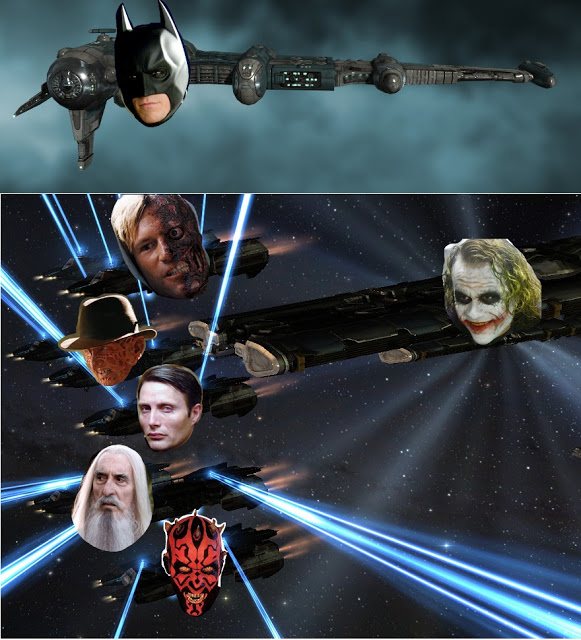 No need for subtlety there--not when so many EVE players are so painfully confused about the moral parameters of highsec activity.

I'd like to drill down a little more on this superhero analogy to see where it takes us. Let's start by reflecting upon the nature of the bot-aspirants. If Agents are superheroes, what does that make the carebears? Supervillains?

This is where, for most people, things break down. Highsec is filled with all sorts of mundane villainy: Unlicensed carebears mining ice in a Retriever, AFK autopiloting shuttles filled with PLEX, decadent fail-fit anti-tanked ships of all kinds... For the most part, not exactly an impressive bunch. Lex Luthor, they ain't.

One of the most common complaints leveled against the New Order is that we only shoot defenseless noobs, that we "shoot ships that can't shoot back". This charge has been debunked many times over. Yet it is true that we do kill a lot of people who lack the weaponry or the wherewithal to return fire. And even if--and when--these carebears bother to put up a resistance, it's still no contest. New Order Agents are unfathomably more powerful than the carebears. The CODE always wins. Does that mean we're not playing fair?

This is where the superhero analogy becomes very helpful. Typically, we think of superheroes battling powerful supervillains; that's what the comic books focus on. But it's not what superheroes spend most of their time doing. It's not even what a superhero is primarily there to do. Would your fine city (or suburb, or rural area) benefit from having Superman as a local resident? Not if his job is fighting supervillains. At best, it would be a wash, with the superhero cancelling out the supervillain. At worst, you'd have a lot of person-sized and monster-sized holes appearing in the middle of buildings.

When you think about it, 99% of the time, a superhero's job is to battle ordinary criminals. The Batman doesn't spend all night camped outside Arkham Asylum, waiting for something big to happen. He mostly goes around busting average punks. They're the criminals who generate most of the crime, so they're the ones you target if you want to clean up the city.

Therefore, 99% of the time, the Batman is "bullying" criminals who stand absolutely no chance against him. They're no match for someone with his training and resources. At most, they're lightly armed. In 99% of cases, Superman engages in PvP against punks whose weapons don't even affect him. By the time they realize what's happening, the fight is already over. They're like AFK miners. "This isn't fair. I'm a new criminal. Go fight someone with superpowers," they say.

Of course, superheroes don't care that they have an insurmountable advantage over their opponents. They prefer it that way. Their very effectiveness is why they got into the crime-fighting business in the first place. Rather than focusing solely on enemies who stand a chance against them, they use the following criteria to determine whether or not to engage: Is this person breaking the law? Are they in violation of the criminal code?

The same is true of our Agents. Most of the time, they're dealing with small-time thugs. The carebears may be unarmed or AFK. Their odds of prevailing against a trained New Order Agent aren't good. Yet it is still an incredibly heroic deed each time our Agents put them down.

Now, it goes without saying that there are some exceptionally villainous people out there, like the highsec CEOs who bleed their members dry with high taxes and ore buyback programs. Or the rebels who use countdown timers and threaten to destroy the New Order if their demands aren't met within 48 hours. Such villains are dealt with, by a team-up or league of Agents, if need be.

For all criminals, the goal is rehabilitation. If they persist in their evil schemes, they are thwarted again and again. The Joker can't complain, "You keep arresting me over and over. This is harassment. I'm filing a petition." Likewise, the recidivist carebear will be ganked as many times as it takes for his behavior to be corrected. The New Order will clean up the mean streets of highsec. We will save our city.
Posted by MinerBumping at 18:12