The New Order Gets Audited

"Audit the New Order!" It's a chant frequently heard from disaffected highsec youth and conspiracy theorists. Despite our organization's trademark transparency and trustworthiness, we shouldn't be surprised by such demands. After all, the New Order governs highsec. People want to know that the entity controlling their lives isn't doing anything bad.

Have you ever wondered what would happen if the New Order did get audited? Wonder no longer. The New Order, which has raised money since its IPO was announced during the summer of 2012, received a surprise audit. The audit was based on an exhaustive study of New Order financial information available through the end of last month. I didn't know this was happening until after the audit was concluded.

Ideally, an audit should be conducted by an independent, objective source. That was the case here: The auditor in question was none other than Agent Kalorned, who equipped a green eyeshade to his hatslot and went to work.

The New Order of High Sec (Known as TNO from here on out) has certainly been on a wild ride for the past 2.5 years of our IPO! Before I go into any detail concerning TNO's financials, let me just summarize by saying that I am very pleased with the growth we've seen thus far, and based on recent data I am encouraged that we will continue our growth trajectory for some time to come. I believe that for such a young organization, The New Order has done remarkably well in raising capital to finance its ongoing mission of liberating High Security space from the scourge of bots and bot-aspirants, and it is you, the humble investor, who we have to thank for a lot of this progress. With the formalities out of the way, let's discuss the numbers!" 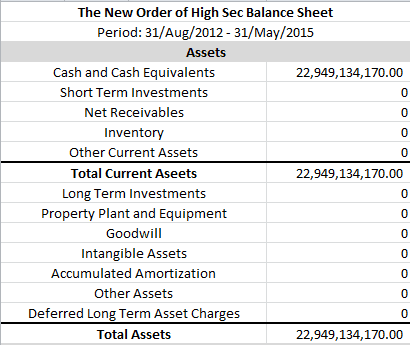 "As we are in the business of only issuing on-demand New Order Mining Permits we have no expected receivables, and likewise since The New Order has no actual in-game presence we hold no assets. For those confused by this last statement, please remember that The New Order of High Sec is a separate entity from the CODE. Alliance many individuals in-game see on a daily basis; TNO can be thought of as an executive entity that guides the actions of CODE., however, actual day-to-day operations and inventory of ganking ships such as Catalysts, Thrashers, and Brutixes are held in inventory by specific non-CODE.-affiliated Agents as well as CODE. Corporations themselves. The New Order is currently uninvolved with any short- or long-term financial investment projects, has not made any acquisitions resulting in goodwill, and has no assets that could be considered for amortization."

Kalorned is a numbers guy. For the purpose of this audit, he made no attempt to quantify the value of having the Code itself as an asset. Nor did he make a guesstimate on the goodwill associated with New Order outreach efforts and victories like last year's big Alliance Tournament win. 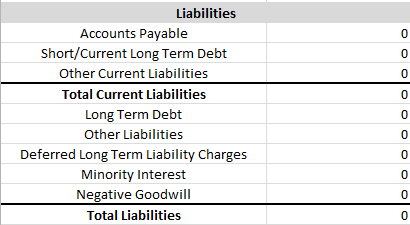 "Since we have no creditors, our accounts payable stands at zero and The New Order holds no debt, both short- and long-term. The New Order does not have any subsidiary entities and so we see that our minority interest is also zero. With no acquisitions to speak of, negative goodwill is also a healthy zero. This brings us to a final figure of zero liabilities in total."

On the other side of the ledger, no liabilities. The New Order isn't beholden to anyone. We stand entirely independent from the bot-industrial complex.

"Stockholders' Equity is an exciting section. The New Order has, since its inception, offered only common stock at a price of 1 million ISK per share. For the reporting period presented here, The New Order has issued 604,313 common shares for a total of 604,313,000,000 ISK since its inception. At this time, The New Order has never declared a dividend of any sort, leaving us with 604,313,000,000 ISK in retained earnings for the reporting period, all of the ISK minus our current assets reported earlier having been reinvested into future growth of the business. This leaves us with a healthy net 22,949,134,170 ISK stockholder equity value."

As Kalorned's audit demonstrates, the New Order's finances are clean as a whistle. We're in a strong position to move forward. Next, Kalorned examined the New Order's history, with data compiled from the monthly "Top 10 Supporters" lists.

"Considering all months since TNO's IPO went live, we see an average combined monthly contribution by Top 10 shareholders of nearly 16 Billion ISK. A basic division operation on this figure reveals to us that an individual Top 10 contributor will purchase an average of nearly 1.6 billion ISK in shares per transaction. Top 10 shareholders have accounted for 89.19% of total shares purchased."

(A minor technical point: The MinerBumping Top 10 lists include non-stock contributions, such as mining permit fees and gifts. However, as a practical matter, the Top 10s are virtually all stock purchases.)


"The next column of numbers features the average ISK value of shares issued broken out by year with no adjustments. Keen investors will notice a general growth trend with one exception between 2014 and 2015 where we are trending far lower than the previous year. To address this potential concern, let's have a look at Figure B, the total contribution amount by Top 10 shareholders for each month."

2014 saw an unusually high average of stock purchases. Kalorned rolled up his sleeves and found out why: 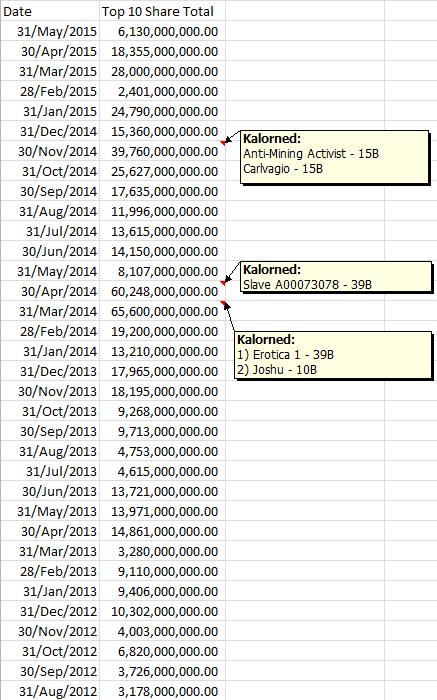 "We see in the table that there were 3 distinct months where The New Order issues an exceptionally large number of shares; for the purposes of reporting yearly averages then it wouldn't be fair to leave these out-of-range values in the calculation. To address this issue we can return to the next column in Figure A where I have discarded the 3 months above to give us a much more reasonable average. As can be noted, using our adjusted values The New Order has seen consistent growth with no setbacks year over year to share issuances." 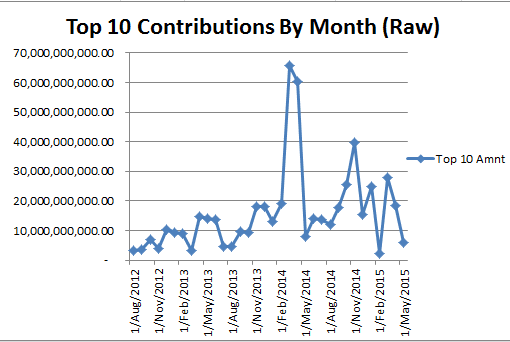 "Let's now wrap up this financial report with some graphs in Figure C. These graphs don't reveal anything we haven't already discussed. The first graph shows Top 10 contributions month by month, and the second graph shows us the total value of shares issued, adjusted, year over year." 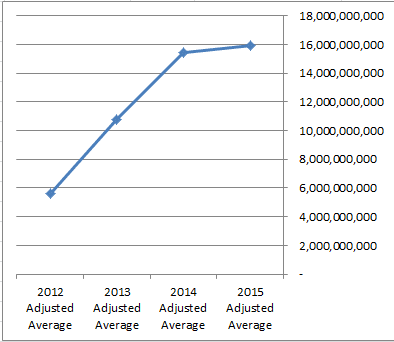 What should we make of all these numbers and charts? Simple: The New Order is saving highsec because ordinary people are doing extraordinary things. When they send money to the New Order, they know they're getting the biggest bang for their buck.


"It has been my pleasure to compile these financial results for our very important shareholders. The New Order strives to be a beacon of transparency, and on behalf of The New Order Of High Sec's financial division I hope this report addresses all your questions concerning the financial health of the organization. Should you have questions regarding the results feel free to eve mail the compiler of the results, Kalorned, in-game. Here's to another 3 years and beyond of improving High Sec!"

And so it was that the New Order of Highsec passed its audit with flying colors. Not only is the New Order the most transparent organization in EVE--it's also the most financially awesome.
Posted by MinerBumping at 18:05