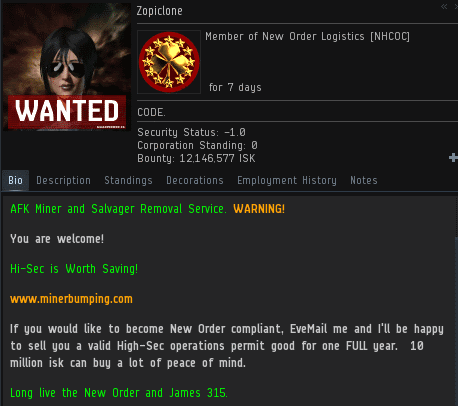 The New Order has witnessed a surge in the number of Agents lately. I suppose people know a winning team when they see it. New recruits are eager to prove their mettle against the bot-aspirants of highsec. Agent Zopiclone is typical of the new generation. They often begin by ganking Ventures and Retrievers, and steadily work their way up. 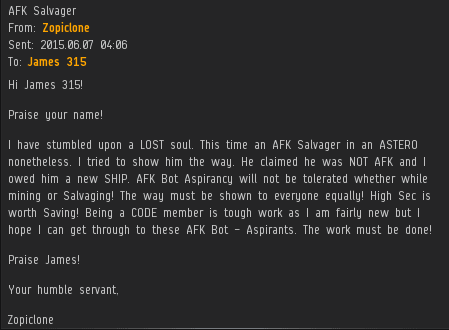 Barely more than a day into CODE., Zopiclone was displaying all the signs of a natural warrior. 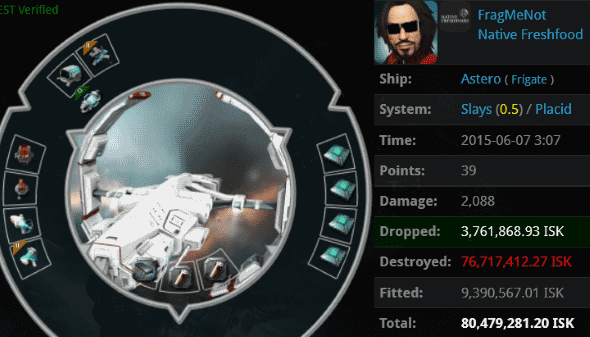 Slays is a system in the Placid region, on the outskirts of Gallente highsec. As the region name suggests, it is a quiet system. But as the system name suggests, it's a still place where carebears can be killed. FragMeNot was sitting perfectly still in a fail-fit Astero. His salvaging drones were doing all the work for him.

Zopiclone, who has not yet reached -5 sec status, landed onto FragMeNot's grid and gradually slowboated toward him. FragMeNot didn't budge. Zopiclone was a new Agent, but she'd seen enough to find the Astero pilot guilty of violating the Code.


FragMeNot > wtf
Zopiclone > You were AFK salvaging!
FragMeNot > no..i was not
FragMeNot > you popped in, came up to me, and killed me.

Normally, this would be where the gank recipient invites our hero to a private convo. Instead, FragMeNot expressed his discontent in local. The Slays system was quiet enough at that moment, so there were few witnesses.

The carebear was in disbelief. Indignant, he adamantly denied being AFK and demanded that his ship be reimbursed.


Zopiclone > The CODE does not OWE you anything.
FragMeNot > nope, YOU owe me something
Zopiclone > You were AFK otherwise you would have seen my coming and would not have just been AFK in SPACE while your DRONES did illegal activity
FragMeNot > dude...I was not fucking AFK

Despite his protestations, FragMeNot had a lot of explaining to do. He was a three and a half year character salvaging in highsec in an Astero. Why hadn't he warped out while the gank Catalyst was slowboating toward his ship? Why didn't he have a permit? And if he was so innocent, why was he speaking disrespectfully toward a known member of CODE.?

The pieces of the FragMeNot puzzle slowly came together. It was apparent that he harbored ill feelings toward the New Order. He was probably guilty of thinking bad thoughts about us, too.


Zopiclone > Settle down AFK Salvager
FragMeNot > lol, what a little baby...settle down, settle down
Zopiclone > No need to get angry over your AFK loss.
FragMeNot > whatever, I was not AFK, you are just being a shit
Zopiclone > Again semantics. You would not be having this conversation AFKER if you weren't AFK.
FragMeNot > you are triple the idiot I've taken you for.

The carebear continued to insist on his innocence. However, he was completely at a loss to explain why he hadn't responded to the presence of a Catalyst slowly approaching him in an asteroid belt.

The system began to stir from its slumber. Something had actually happened. Locals immediately assumed CODE. must be responsible. Without us, they wouldn't get much content in their game.


Zopiclone > Come ON! You know the reason was that YOU WERE AFK!
FragMeNot > Going for quad idiot folks, quad idiot
Zopiclone > Bot Aspirant Behaviour will not be tolerated in HIGH SEC Space!
FragMeNot > you're a silly guy, do you wear a helmet outside?
Zopiclone > Sadly if you werent afk I definitely would not have been able to close the distance to 1km on you before you popped.
Zopiclone > But keep telling yourself you were actively piloting that spacecraft!
Zopiclone > at 0km/hr

Our Agent urged FragMeNot to confess. It would make things so much easier if he simply admitted his guilt.

At long last, the carebear came up with his excuse. He considered himself actively piloting his ship because he was busy salvaging with his drones. His drones were autonomous, sure, but FragMeNot felt that if his drones were active, that should be imputed to himself.

Zopiclone wasn't persuaded. She knew the Code too well. FragMeNot was a bot-aspirant. He probably wished that his whole ship could be a big, fat drone.

With some parting words of encouragement, Zopiclone left the Slays system. She'd scored a PvP victory--and more importantly, a moral one. Like all New Order Agents, Zopiclone understood that our goal is to always leave a system better than we find it.
Posted by MinerBumping at 18:00